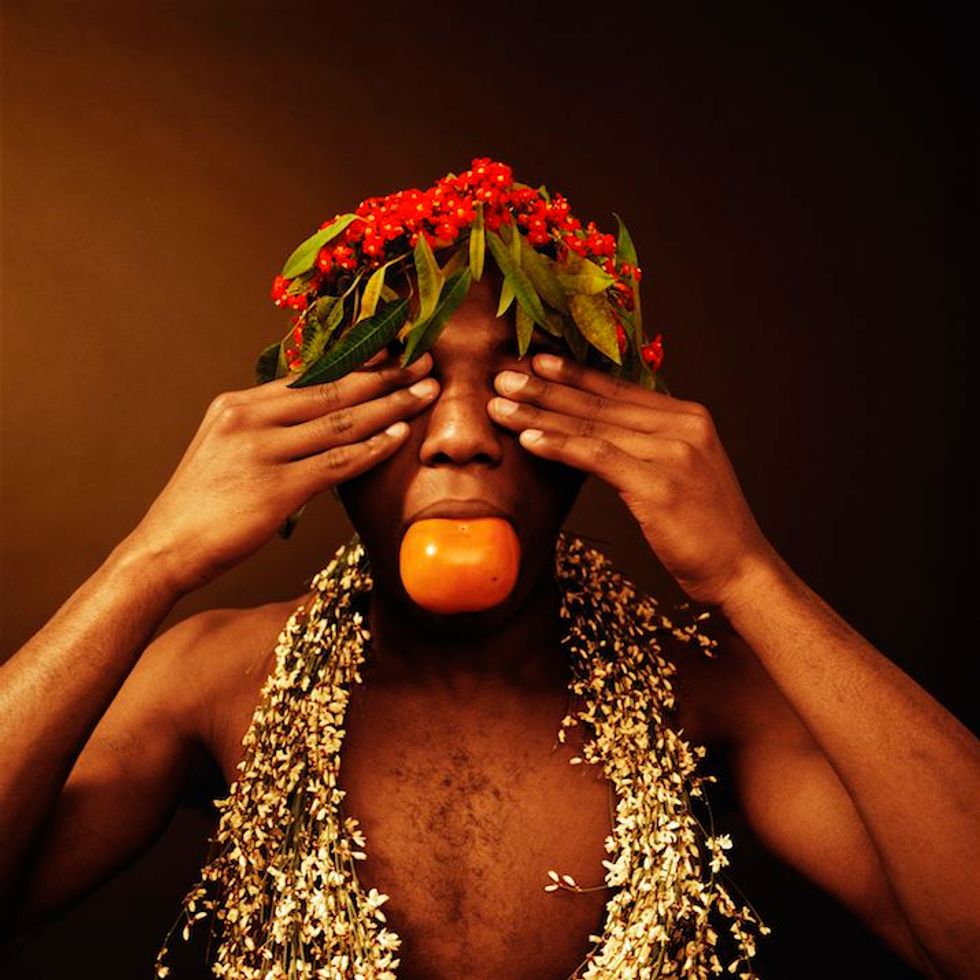 *disclaimer: this beautiful, thoughtful, inspiring photographic work has been at times called “graphic” so we’re giving a fair warning some of these images are what some call “not safe for work”

Rotimi Fani-Kayode (1955-1989) is a new solo retrospective at the Tiwani Contemporary in London featuring the seminal work of late Nigerian photographer Rotimi Fani-Kayode, whose vivid photography constructed a rarely-seen narrative centering around cultural displacement, Yoruba spirituality, sexual desire between black males, and the subversion of neo-colonialism. Born Oluwarotimi Adebiyi Wahab Fani-Kayode in April 1955 to a high-ranking Yoruba family with considerable political and religious cachet, Fani-Kayode spent his teenage years in exile in the U.K after his politician father, Chief Remi Fani-Kayode, moved the family from Lagos to Brighton to escape the brewing Biafran Civil War. After attending a number of English private schools, Fani-Kayode relocated to the U.S. in the late seventies for his undergraduate degree, where he studied Fine Arts and Economics at Georgetown University before receiving his M.F.A in Fine Arts and Photography at New York's Pratt Institute.

Alongside his longtime romantic and creative partner Alex Hirst, who he met upon his return to London in 1983, Fani-Kayode approached the black male body primarily as a site for exploring the multiplicity of his identities as a gay, black, African male creating homoerotic imagery against the backdrop of  rampant racism, homophobia and anti-immigration rhetoric during the conservative tenure of Margaret Thatcher. Fani-Kayode’s work has drawn comparison to that of American photographer Robert Mapplethorpe, whom he befriended while living in New York. Though Fani-Kayode cites Mapplethorpe as an influence, the Nigerian-born artist's mystical portraits in both color and black-and-white meld African and European iconography with stark nudity to delve deeper into the tenuous relationships that existed within him and the world he inhabited. Fani-Kayode articulated the vision behind his oeuvre in an essay penned a year before his death. In it, he writes:

"My identity has been constructed from my own sense of otherness, whether cultural, racial or sexual. The three aspects are not separate within me. Photography is the tool by which I feel most confident in expressing myself. It is photography therefore — Black, African, homosexual photography — which I must use not just as an instrument, but as a weapon if I am to resist attacks on my integrity and, indeed, my existence on my own terms. [...]

Both aesthetically and ethically, I seek to translate my rage and my desire into new images which will undermine conventional perceptions and which may reveal hidden worlds. Many of the images are seen as sexually explicit - or more precisely, homosexually explicit. I make my pictures homosexual on purpose. Black men from the Third World have not previously revealed either to their own peoples or to the West a certain shocking fact: they can desire each other. Some Western photographers have shown that they can desire Black males (albeit rather neurotically). But the exploitative mythologising of Black virility on behalf of the homosexual bourgeoisie is ultimately no different from the vulgar objectification of Africa which we know at one extreme from the work of Leni Riefenstahl and, at the other from the ‘victim’ images which appear constantly in the media. It is now time for us to reappropriate such images and to transform them ritualistically into images of our own creation. For me, this involves an imaginative investigation of Blackness, maleness and sexuality, rather than more straightforward reportage"

Though his career spanned a brief six years, Fani-Kayode's work has been on display in exhibitions and retrospectives the world over, with the first showing of his work in an African museum having taken place earlier this year in South Africa. The Rotimi Fani-Kayode (1955-1989) retrospective in London commemorates the 25th anniversary of Fani-Kayode's premature death at the age of thirty-four in December 1989 from a heart attack and is curated by Mark Sealy and Renée Mussai of Autograph ABP, a collective of black photographers co-founded by Fani-Kayode in 1988 that aims to highlight creative work from marginalized groups.

Rotimi Fani-Kayode (1955-1989) runs from September 19th to November 1st at Tiwani Contemporary in South London in partnership with Autograph APB.