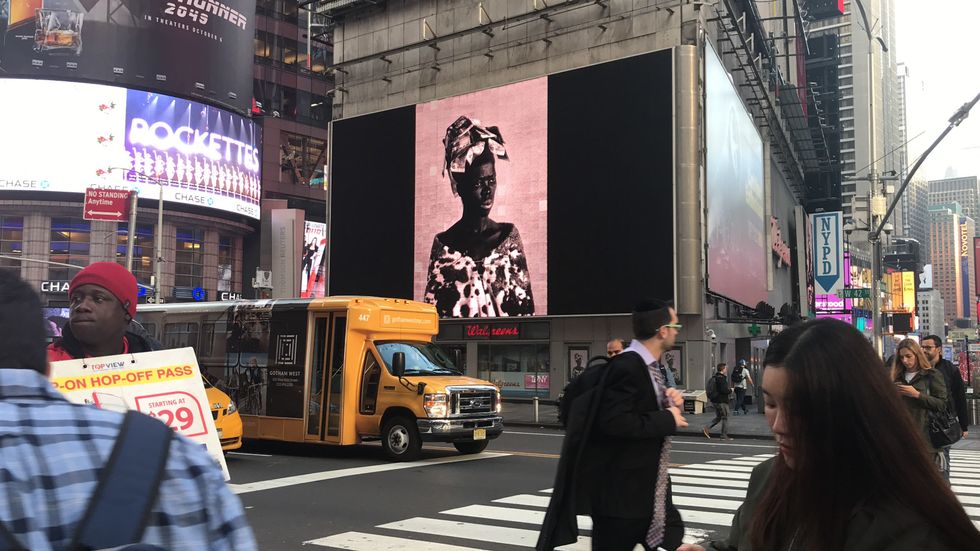 The artist shares the significance behind her Performa 2017 installation in NYC.

Self-portraits of the photographer have permeated four boroughs of the city, including the Manhattan tourist attraction, as part of a collaboration with Performa, an organization dedicated to exploring live performance. But, despite Muholi's face front and center, the artist has made it known that it's not all about her.

“Home became the first thought," said Muholi about being asked to headline Performa 17. “I said to myself, I can't do this thing in New York alone, not this time, not ever."

Alongside talks at the Schomburg Center in Harlem and a wildly successful exhibition at the Yancey Richardson gallery, which runs till December 9th, the culmination of Muholi's Performa 17 New York tour ended with members of her posse: South African LGBTIQ performers, artists, activists—even a doctor—taking center stage at the Bronx Museum.

According to Odidi Mfenyana also known as “Odi Diva," a drag performance artist, writer poet and the night's master of ceremonies, the performers were on stage to do what South Africans do best, “sing and dance." But even with the musical frenzy, the poignant political message of the community shone through. In different mediums, over a dozen artists took to the stage to proclaim that black members of South Africa's LGBTIQ community were present and deserved to be seen in their entirety.

“All the work is beautiful, but it serves a purpose," said Lydia Brawner, a curatorial fellow at Performa, about the performances.

South African singer, Yanela Ncetani-Mhlawuli, doesn't classify her music under one genre or language. The artist's sound is a patchwork of jazz, R&B, Xhosa, Zulu, and English, but her message couldn't be clearer. Ncetani-Mhlawuli's soulful rendition of the horrors of corrective rape in South Africa shed light on a troubling trend that has plagued South African lesbians for almost two decades. Despite the unfortunate frequency of the act, it's hardly given the attention it deserves.

“We're screaming out for help, we have rights," said Ncetani-Mhlawuli. “I'm saying, us as people have rights in this beautiful land."

Despite being the first country on the African continent to secure marriage rights for its LGBT citizens, there is still a deep-seated discrimination that many members of the community face. Dr. Mpume Simelane, who works as a gynecologist in South Africa, noted that hostility in hospitals and mainstream medical spaces toward members of the South African LGBTIQ community further discriminate and isolate them, leaving many without access to necessary healthcare and education.

“They go to hospitals only when things are really wrong," said Simelane.

When asked what needs to change, Simelane's answer was simpler than expected, “the attitude," she said with a small smile.

She noted that because hospitals are more inclined to treat heterosexual patients, “they don't know how to deal with difference."

“We need to change our attitude and think about how we can make medical spaces more accessible for members of the LGBTIQ community," said Simelane.

Muholi's mention of the parallels between the trans community in South Africa and the United States showed that there is still much work to be done here and in South Africa.

“The U.S is hot right now," said Muholi in reference to the increasing number of black trans women who have been killed in the past year.

In order to build a truly inclusive community in South Africa, Muholi noted that the accounts and experiences of all LGBTIQ citizens need to be addressed equally while referring to the double discrimination disabled black members of LGBTIQ community face.

For Muholi, it's all about empowering the multitude of people that exist in the community.

“It doesn't make sense to shine alone," she said.