After the the deadly attack on Tuesday, many are accusing the American newspaper of having a double standard on which dead bodies they allow into the paper

Is the New York Times guilty of a double standard when it comes to publishing images of dead bodies?

Kenyans, and others fed up with the coverage, took to social media in the hundreds to denounce a Times article that included an image of victims of Tuesday's Nairobi terrorist attack, bloodied from bullets, and lying hunched over their laptops, dead.

It caused enough debate online to where the Times' incoming East Africa Bureau chief Kimiko de Freytas-Tamura felt the need to explain their photo policy, which is to show the dead only if their faces cannot be seen in the image. The photo in question fits the policy as the faces are facing away from the camera. She would later apologize before posting the official policy to her Twitter account. The photo remains up.

The Times' official response, as those tend to do online, has only created more anger. But unlike many unruly Twitter mobs, those responding to the official statement have a rather coherent message—"you wouldn't do this with photos of the American dead." 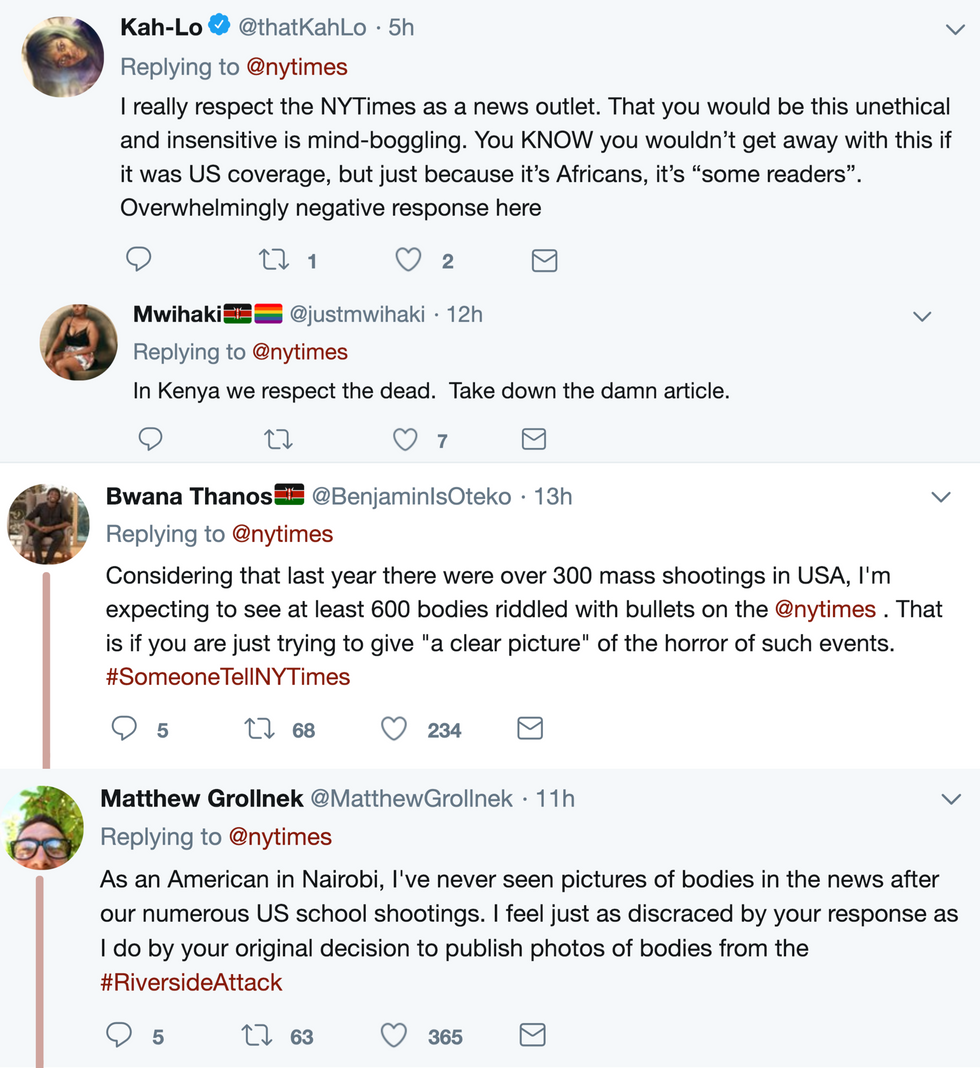 Some of the responses to the Times' official statement.

In a response to the controversy from the Poynter Institute, a typically astute observer of journalistic practice in the United States, they run through the typical American journalism school approach to publishing photos that might shock or offend. They write:

Should the Times have run the photo?
There is no easy answer.
The first question any news organization must ask when deciding to publish violent images is: WHY show it?
In other words, what is the news value? Does the public need to see such an image to fully grasp what happened? Does the public need to see such a photo to confirm or disprove the official account of the events?
An argument could be made that a writer's words could accurately describe the scene without being as disturbing as the image. In addition, when it comes to an act of terrorism, might publishing such a photo actually advance the cause of the terrorists, showing the damage they caused, thus fueling dread and panic?
Also this: The photo on the Times website came without warning. As a reader, you didn't know you were going to see a photo of dead people until you actually saw it.
Those are arguments to not run such a photo or, at least, warn readers of its graphic content.

While it's a fine analysis of when to show a violent image, it misses the central issue at play for those aggrieved by the Times' posting—that the American news-gaze values certain lives differently. Black, brown, foreign, poor—American journalism organizations, including the New York Times, cannot escape a base ethnocentrism in their coverage. It's so embedded into how these institutions operate, and the gap in understanding is so wide, that to much of the world, the Times' official response is laughably wrong at first glance.

And while there are examples from the Times that complicate this feeling, like these images of the dead in the terrorist attack in Nice, France, it doesn't discount the wider and correct feeling that the white victims of American mass shootings are treated differently than their African counterparts. And while there are complicated and systematic reasons for this which will always make discussing it difficult, to simply deny that different standards exist, does not increase the Times' credibility with Kenyans or the newspaper's growing online audience which will only become more vocal about how they're portrayed.

Overstand: Driving Haiti to the Brink and Back

The popular protests that shut down Haiti this month began with a bet that Brazil would win their World Cup quarterfinal.

"A riot is the language of the unheard" - The Other America Rev. Martin Luther King, Jr. Grosse Pointe High School - March 14, 1968

July 6th, 2018 was an important and exciting day in Haiti as Brazil, the country's unofficial favorite team, squared against the "red devils" of Belgium in the quarterfinals of the World Cup. Life in the country had essentially stopped and most Haitians could be found huddled around small TV screens to watch the game.