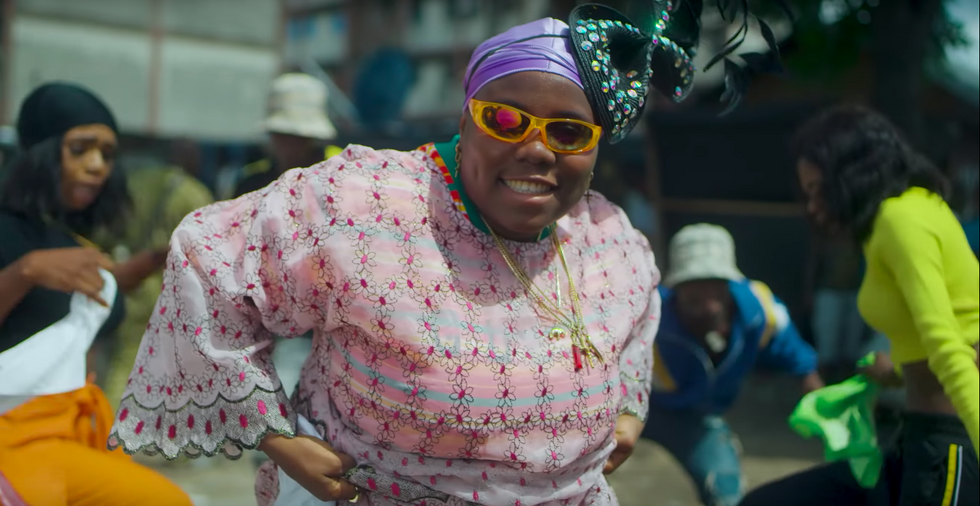 "There's an assumption that women have to look a certain way to be feminine, but I don't want to conform to that stereotype. My thing is this: You don't get to decide how I choose to live my life," the artist tells Vogue Magazine.

Nothing can hold Teni the Entertainer back, and this message is clear as ever in her latest music video "Sugar Mummy."

In the upbeat song, the artist lets the world know that she's willing to take on anyone who gets in her way—especially the haters and naysayers. In the song's lively music video, directed by DK, the artist can be seen doing just that—taking on folks on the street before having an intense, but hilarious eba and chicken eating contest with popular Nigerian actress Eniola Badmus.

READ: Teni the Entertainer is the Breakout Star of 2018

"I want to make 'Sugar Mummy' a positive term," says the artist in a recent profile in Vogue. "She is a woman with swag, who looks good, who is proud to be different."

The 26-year-old artist spoke with the magazine about her time attending a "PWI" in the States, her style and love for sneakers, as well as her dedication to owning who she is despite the pressures often placed on women to look and act a certain way:

There's an assumption that women have to look a certain way to be feminine, but I don't want to conform to that stereotype. My thing is this: You don't get to decide how I choose to live my life. I'm being me—respect that.

She also discussed using her growing platform for good, revealing a time when she helped a fan going through a dire situation.

This girl was on the verge of committing suicide, so I immediately got her number and reached out to her," she says. "She explained that watching my funny Instagram videos had kept her going. It was in that moment that I realized how powerful my influence can be. If I can be a source of hope and joy to somebody, then I'm doing something right.

When we caught up with the artist last December, she expressed a similar sentiment about wanting to bring people joy through her music and Instagram comedy. "Teni the Entertainer is about bringing positivity into a world that needs a lot of it through entertainment," she told OkayAfrica, "It could be turning societal issues around me into light-hearted moments, or singing about them. Regardless, it is all about making the world a happier place."

With "Sugar Mummy" the artist is keeping good on her mission to deliver feel-good entertainment. Watch the energetic music video above.