How Sudanese Art Is Fueling the Revolution 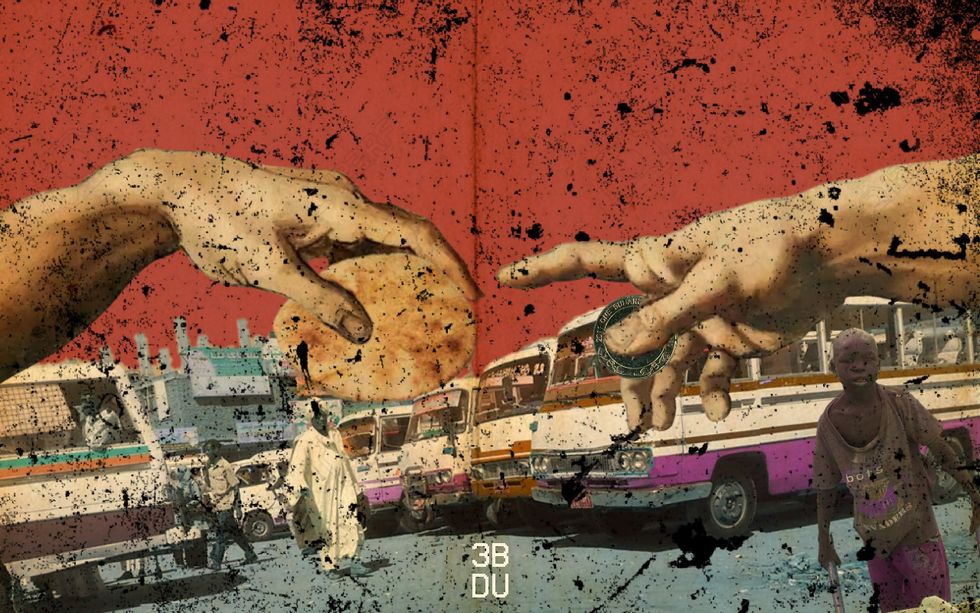 'The Bread Loaf' by AbdulRahman Alnazeer.

Young artists are using their work to voice the frustrations of the masses in a country yearning for political reform.

In 2012, I attended the launch of world-renowned Sudanese artist Ibrahim El-Salahi's autobiography, 'A Fistful of Sand', in Khartoum. During the Q&A session, a man raised his hand to address El-Salahi. "While we appreciate your contribution Mr. El-Salahi, I fail to see the importance or influence of art in society."

Thirty years under the rule of Omar Al-Bashir and his self-dubbed "Savior" regime have led to acute brain drain in every discipline, and a complete disintegration of the arts.

So that man's dismissive attitude comes as no surprise; more so than proof of the violent repression in which the Sudanese people live, it is the natural result of three decades of economic hardship and impoverishment. As one friend put it, "Art was one of the casualties [of this regime] - who has the time for 'silly things' like creative expression and self-actualization when you're worried about your next meal?"

But creative expression is an inextricable part of the Sudanese personality and deeply rooted in the culture and folklore. From the ever-popular twentieth century resistance poetry of Mahjoub Sharif and Hummeid to the political songs of Mostafa Sid Ahmed and Iqd Elgalad, it is reflex. In the absence of freedom, art—in all its forms—has persisted as a means for those in Sudan to loudly say what can only be whispered. And for the diaspora, it is the tapestry we weave, each thread connecting us to home.

Over the last few years, the country has been living, arguably, the darkest period in its modern history. In December 2017, Sudanese across the globe watched in disbelief as the government rolled out its plans for the 2018 national budget, revealing that the vast majority of funds were earmarked for "defense and security" (most of which were poured into the NISS, the national intelligence agency and main apparatus for oppression), while a mere 3 percent of the budget was set aside for education, and a shameful 2 percent for healthcare.

Mired in one catastrophe after the next, 2018 proved to be the disaster many feared it would; Sudan was in a freefall—one that was intimately and poignantly reflected by Sudanese creatives.

"The art of this movement forces us to acknowledge the reality: this is not just a 'bread protest', it is a battle for freedom."

After the removal of government subsidies on bread, digital artist AbdulRahman Alnazeer released "The Bread Loaf", a clever adaptation of Michelangelo's "The Creation of Adam", in which Adam holds a loaf of bread as he reaches for God, superimposed on an iconic Sudanese backdrop of a crowded bus depot. From growing poverty and homelessness to the worsening public transportation issues, AbdulRahman Alnazeer's tableau succinctly and powerfully displays many of the issues faced by citizens in Khartoum during this time.

By mid 2018, Sudan's inflation rate had skyrocketed to almost 62 percent, doubling from the previous year. In rapid fire succession, one calamity after another hit: 19-year-old Noura Husseinwas sentenced to death for killing the husband who raped her and to whom she was married three years earlier by force, causing international outrage and plunging the nation once more into a debate on the legality of child marriage and marital rape in Sudan. On the eastern front, the Chikungunya outbreak went unchecked, affecting more than 11,000 people in a single month. The crisis was compounded greatly by the now routine ill-preparedness of local and national government for the rain and flooding season, which also resulted in the deaths of 25 children in the span of two weeks.

From the Arabian Peninsula across the Red Sea, cartoonist Abu'Obayda Mohamed created heart-wrenching pieces that captured this painful reality. "Art is not always about pretty things; [it] is about who we are, [it] is the reflection of what is happening in our lives and how it affects our lives", he says.

Mohamed's viral pieces center the map of Sudan, a move that serves as a stark and unrelenting reminder that these are not isolated local issues, but rather illustrative of the general state of the country.

Then, on December 9, Abu'Obayda released "Cry of Home", a piece that, just ten days later, would prove to be prophetic.

On December 19, 2018, high school students in the city of Atbara in northeastern Sudan took to the streets after discovering that their school lunch prices had doubled overnight.

These young men's courage was the spark the people needed. Their anger flung open the floodgates, releasing a wave of rage that rolled through the country all the way to the capital, sweeping up men, women and children in its wake.

Off the streets and online, the protest wave triggered a surge of creative activity. For artists like Enas Satir, the pieces they created were a way to process the events that were unfolding.

"Art has been both 'healing' and energizing," says Satir. "When the protests broke out I was overwhelmed with anxiety—being away from Sudan in times like these when people are being killed and tortured and you're an ocean away, engulfs you with helplessness combined with a strange feeling of guilt."

"Cry of Home" by Abu'Obayda Mohamed.

But Satir also felt a responsibility. "The media, especially in the beginning, [was] absent and furiously inaccurate in reporting the protests. This situation made me realize that […] when the media stepped down, we had to step up."

She then created the series, "Keizan and Why They Are Bad For You", a collection that at once provides historical context and poignant commentary on the impact of this 'Keizan'-led dictatorship over the last 30 years. No piece demonstrates that as vividly as this one, in which Sudan's deterioration is personified. In the caption, Satir writes, "If Sudan was a person it would, by now, be gravely ill."

The artists of this movement have "risen to the occasion", as Satir states, occupying the role of documentarians and record-keepers of the revolution. Pieces by graphic designer Swar and artist Tibyan Albasha have memorialized iconic moments in the movement, while graffiti artist Assil Diab's murals have immortalized some of the young men who have lost their lives at the hands of the regime, and serve as a wakeup call to those on the ground who are still on the fence.

This popular uprising has triggered a social, political and cultural awakening - and in many ways, the art birthed from this movement has been working in tandem with it, challenging many of the same political and societal notions being addressed on the street.

Alaa Satir's piece "Thawrat Mara" translates to "woman's revolution", and addresses the misogyny rampant in Sudanese society at large, and rearing its ugly head in the revolutionary movement. In specific, it is a scathing critique of a chant used during the early protests that referred to the President derogatorily as "the son of a woman."

In the accompanying caption, Alaa explains, "The word [mara] meaning woman, along with many words linked to womanhood have been used as slurs to indicate negative traits like weakness […] while [rajil or rajala] meaning man or manhood is here to do the opposite. While we are in the quest for freedom, let's just pay attention to our internalized misogyny.. and keep it away from our chants."

Artistic expression has proven to be an intrinsic part of this uprising, assuming a multipurpose role in it. Across the world, Sudanese people are wielding poetry like weaponry, chanting in rhyming couplets for freedom. Online and off, art has been sketched, drawn and spray-painted to document, educate and motivate.

But no medium has fulfilled this multipurpose role quite like music.

"I came across many tweets that encouraged artists to participate, but […] I did not feel like making music was a real contribution to the cause," says Qatar-based producer Sammany Hajo. "I had a conversation with [a Twitter user who] helped me see the importance of art in revolutions and how it can be used to document and encourage at the same time. 5 days later I released 'Sudan Revolts'.

The track is a seamless mélange of samples from the movement, combining the sounds of protest chants, revolutionary songs and other soundbites to a beat of Hajo's creation. "After releasing 'Sudan Revolts', I received a lot of messages from people who were taking part in the protests, telling me that my music helps them get through the day or even motivate them to go out again and keep fighting."

He's not the only one. UAE-based rapper OSMAN's song, "Farig" (leave) starts with a protest soundbite, and then a call by the artist: "Get up and see about your country/it's chaos/the people have taken to the streets".

OSMAN says that artists have "the biggest and most important role in the army of freedom", a sentiment that many artists who have contributed to the movement seem to share.

The art of this movement forces us to acknowledge the reality: this is not just a 'bread protest', it is a battle for freedom. As Enas Satir puts it, "the power that art has, whether it be an illustration or otherwise, has a huge impact on people. Our role is to create art that cannot be ignored."