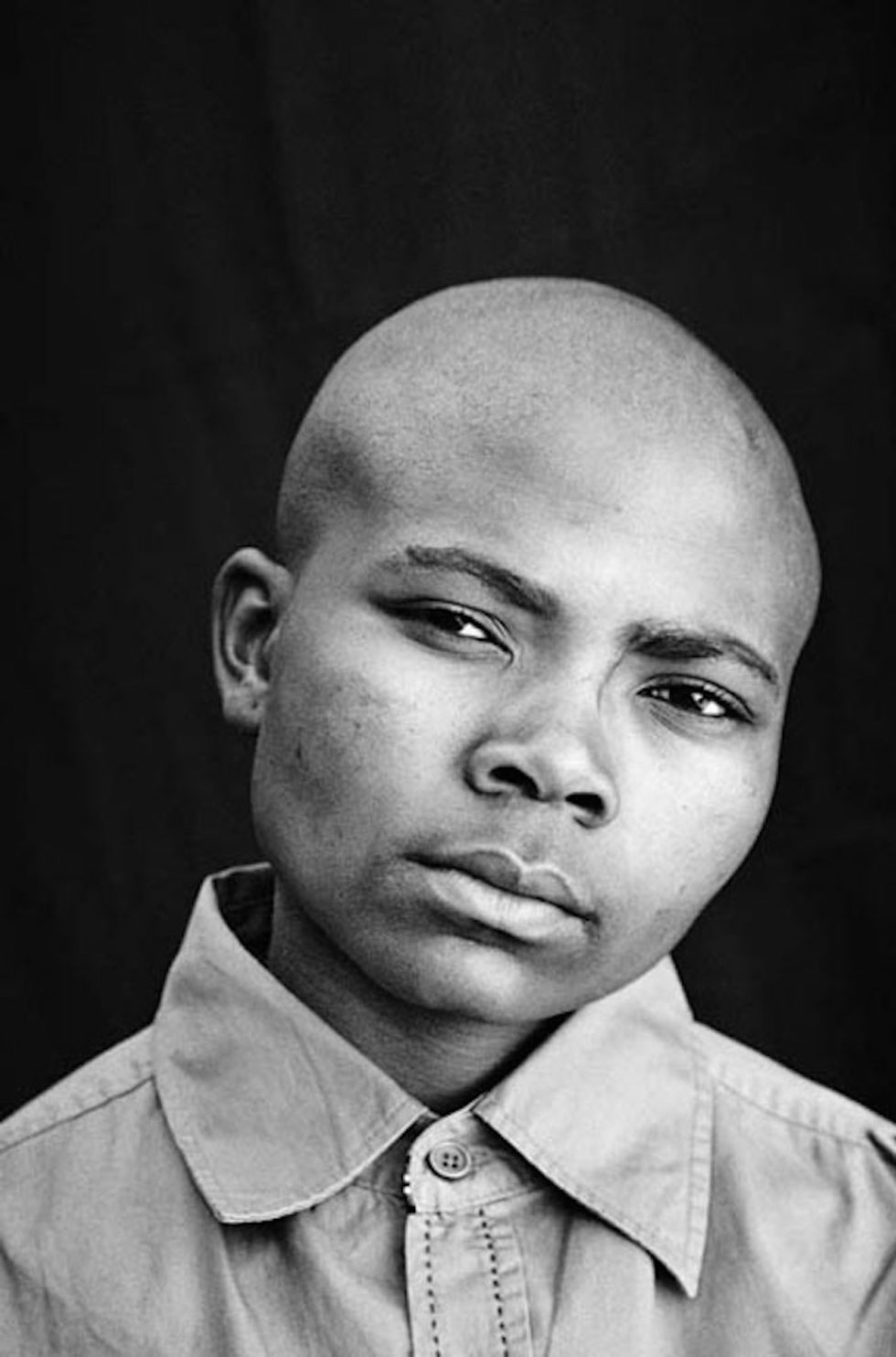 For the last eight years photographer, visual activist and community organizer Zanele Muholi has devoted herself to documenting members of South Africa's LGBTI community for her portrait series Faces and Phases. Sexual orientation and gender identity form a major part of Muholi's work and she focuses her lens mainly on black lesbians and other queer-identified persons living in South African townships to create a positive and rarely-seen record of their lives.

The participants in the award-winning artist's series are framed within the medium of portrait photography, and each black and white image exists to counter the dominant heteronormative narratives surrounding race, gender and sexuality in post-apartheid South Africa. In this regard, Muholi joins a storied list of African artists such as Seydou Keita, Malick Sidibéand Samuel Fosso, who have used portraiture to create spaces where one can either bear witness to their own personal histories or inhabit new ones without fear. As each subject poses confidently in their varying degrees of gender expression, they meet the viewers gaze directly and in doing so subvert notions of queer African invisibility. Her work with this project has since culminated in Faces and Phases (2006-14), a 368-page monograph which represents a tangible visual archive of queer African history. The forthcoming volume contains over 250 portraits, accompanied by personal essays, of gay, lesbian, transgender and intersex persons from a myriad of locales, including Gugulethu, Parktown, Soweto, KwaThema, Gaborone, Harare, London and Toronto.

As one of the artists featured in Petter Ringbom's new documentary Shield and Spear, Muholi is considered part of the new wave of South Africa's contemporary artists. "I'm using visuals as a way of creating awareness. [In] capturing the moments...those truths and realities...the world will learn about our cultures," Muholi says in a video (below) produced by the Human Rights Watch to mark their 16 Days of Activism Against Gender Violence campaign. She articulates the sentiment further in her artist's statement on Faces and Phases:

In Faces and Phases I present our existence and resistance through positive imagery of black queers (especially lesbians) in South African society and beyond. I show our aesthetics through portraiture. Historically, portraits serve as memorable records for lovers, family and friends.

The viewer is invited to contemplate questions such as: what does an African lesbian look like? Is there a lesbian aesthetic or do we express our gendered, racialised and classed selves in rich and diverse ways? Is this lesbian more 'authentic' than that lesbian because she wears a tie and the other does not? Is this a man or a woman? Is this a transman? Can you identify a rape survivor by the clothes she wears?

Faces and Phases is an insider's perspective that both commemorates and celebrates the lives of the black queers I have met in my journeys. Some of their stories gave me sleepless nights as I tried to process the struggles that were told to me. Many of the women I met had been violated and I endeavoured not to exploit them further through my work. I set out to establish relationships with them based on a mutual understanding of what it means to be female, lesbian and black today. Faces and Phases is about our histories and the struggles that we continue to face.

Born in Umlazi, Durban, to a working class family (her South African mother was a domestic worker and her Malawian father a day laborer), Muholi was a hairstylist and factory worker prior to pursuing her artistry on a full-time basis. Her blue collar upbringing paired with a passion for gender rights fueled a desire to showcase black female sexualities beyond the binary of gay/straight or butch/femme. Besides Faces and Phases, Muholi's other works are testaments to the multifaceted experiences of LGBTI persons in both personal and public spaces. Her 2007 series, Being, captures moments of intimacy and affection between same-sex couples that stand in direct opposition to the negative and sensationalist imagery often associated with queer South Africans in mainstream media. Though South Africa is the sole nation on the continent to have legalized same-sex unions, homophobia still runs rampant and members of the LGBTI community are openly discriminated against, often ending up as victims of public beatdowns, corrective rapes and brutal murders. Anti-hate crime legislation has been proposed by South African lawmakers; but until it goes into effect, prejudiced and hateful behaviors against LGBTI individuals continue to go largely unchecked.

In addition to her work behind the camera, Muholi also gives queer narratives a literary voice with Inkanyiso, a media collective featuring personal testimonies, anecdotes, and news stories from the people she photographs. Muholi's work has been shown in Switzerland's Art Basel, the Venice and São Paulo Biennales and in solo exhibitions in the U.S, France, Germany, Italy, the U.K and The Netherlands.

Faces and Spaces (2006-14) is now available to pre-order. Watch Muholi discuss her community, creative process and work with Inkanyiso below.