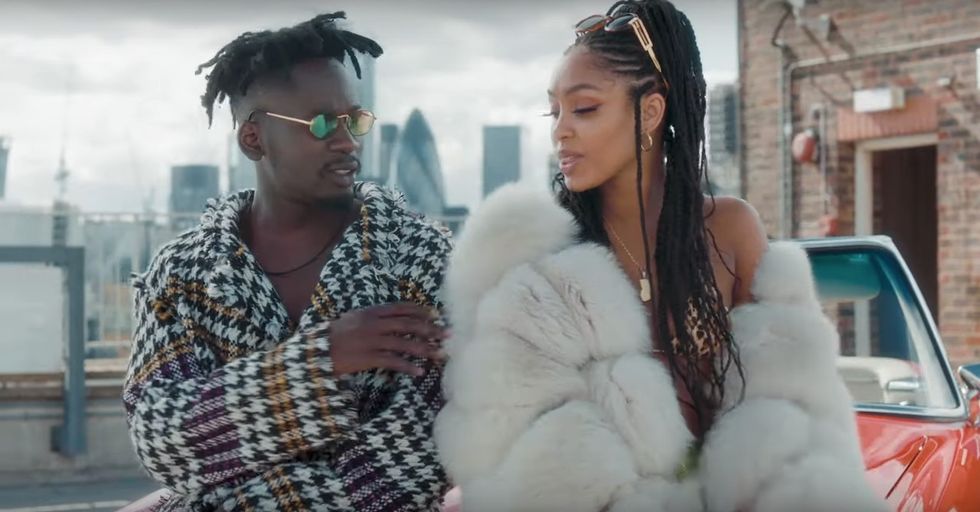 Mr Eazi has released the accompanying music video for "Supernova" shortly after he released the single and it does not disappoint. Directed by Meji Alabi, we see the Nigerian crooner with a Godzilla head and a plaid zoot suit win over the heart of his love interest in the quirky visual. Pairing well with the song, he's surrounded by swaggy dancers serenading his vixen while having fun. His first single of 2019, produced by E Kelly and Dre Skull, is a super obvious 2-minute tune—who wouldn't want to be toasted with Fashion Nova?

South African twin-DJ duo Major League DJz just unleashed a new six-track EP alongside Focalistic titled Ase Trap Ke Pina Tsa Ko Kasi. The title loosely translates to "It's not trap, it's songs from the hood." Trap isn't necessarily associated with the hood in South Africa. But amapiano, the incumbent house subgenre in South Africa, which dominates the EP, was started in the townships of Pretoria.

Odunsi shares the highly-anticipated music video for his single, "Star Signs," a standout from his 2018 debut album rare. The alté mainstay pays homage to Nigeria's late '80s and early '90s party culture, which was all about fun, fashion and flashiness. Odunsi takes on a glittering, King Sunny Ade-esque persona as he leads a party full of people dressed in traditional Yoruba garb. Each table at the function is arranged according to a zodiac sign. The vintage themed video, directed by Candles, features several cameos, including one from frequent collaborator Santi.

After having collaborated with UK artists such as Rita Ora, Lilly Allen and Dave, Burna Boy continues to carve out a space for himself on the UK music scene. Most recently, is his feature on UK singer Mahalia's new track entitled "Simmer''.

South African hip-hop OG Ma-E gives his single "Le Vibe" fitting vocals. The song is purely kwaito, from instrumentation to vocals. The music video was shot in the hood, and sees Ma-E mingle with his peeps at the corner store. But the highlight of the video has to be the pantsula dance routines that are fitting for a song that references kwaito, a genre of music associated with amapantsula.

Here's a big Ghanaian link-up from Efya and Medikal who connect over a trumpet-backed beat in the new single "Ankwadobi."

KOKOKO! is the raw, alternative sound of Kinshasa. The DRC group—which consists of French producer Xavier Thomas (aka Débruit) and a team of rambunctious musicians from the Ngwaka neighborhood, including vocalists Makara Bianko and Love Lokombe—return with their hypnotizing new album, Fongola.

South African hip-hop artist, The Big Hash just dropped the visuals for his latest single "Circles." The song portrays Hash's feelings about a woman who clearly did him wrong in the past. In the video, the rapper tells parts of his ordeal visually. The woman in question is seen betraying Hash. The video was directed by Clout Cassette, a name you should be familiar with if you've been checking out A-Reece's recent music videos.

Ghana's SSUE comes through with the alluring new music video for her single, "Commotion." As the artist describes, "The child listens to the song and dreams of her favorite artist and eventually meeting her and the other tracing the artist's childhood desire and ambition of being a music star and succeeding in being one."

"No Know" is available now

Uganda's Joel Sebunjo has just released this latest 8-song album, United Slaves of Africa, a record that you should really spend some time with and digest.