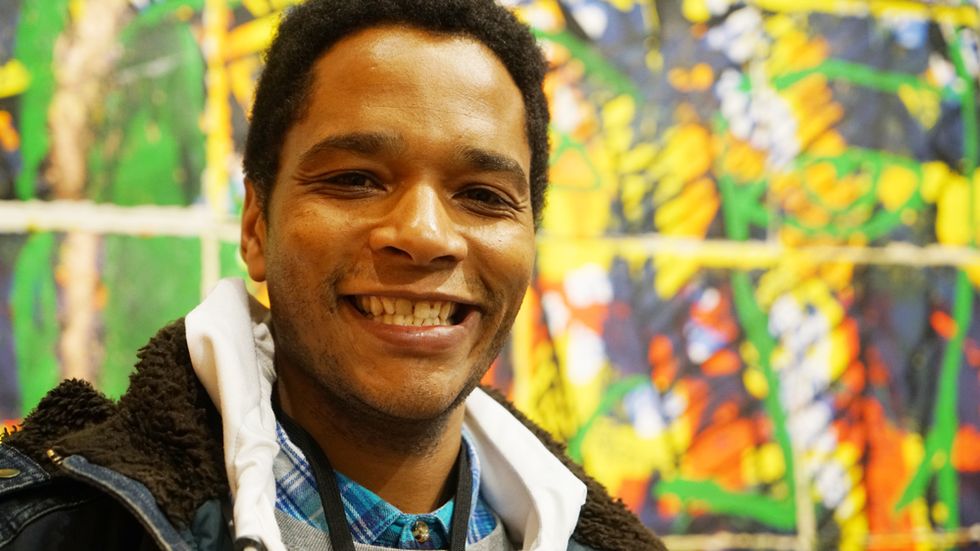 The Armory Show’s African Focus section is the way of the future.

African artists were the heart of New York’s premier art event last week. The Focus section of the 2016 Armory Show, African Perspectives, brought the continent and the diaspora to the center stage of Pier 94. Its curators, Contemporary And co-founders Julia Grosse and Yvette Mutumba, were also the only women to curate an Armory Focus in the section’s seven-year history.

“To be in a space where we’re finally at the epicenter of the conversation, and not in the fringes or in the nooks and the crannies, is really great,” Shariffa Ali, a Kenyan-Ethiopian theater-maker in New York City, tells Okayafrica. “I love being able to walk into a space and see work by my peers and African contemporaries from my left, on my right, in front of me, behind me,” she says. “To be fully immersed is truly an amazing experience.”

Okayafrica went inside the Armory Show’s African Focus last Sunday. Below, we ask several participating artists and gallerists to talk about one body of their work at the show.

“I was thinking of how women are sometimes seen as objects by men. This is based on part of my experience in Nigeria. They think that it’s important for you to have a good bum and also a good weave, especially as a black woman. So if you don’t have a weave, it’s a bit like ‘what are you doing?’ So that’s what inspired the piece. I combined a bum and a weave together. There are no other body parts. It’s called ‘Boys Follow Me.’”

Namsa Leuba at the Art Twenty One booth of the Armory Focus. (Photo: Ginny Suss)

“For the last few years I’ve been working on African identity through the western eyes. I like to work with clothes we use for ceremonies and different artifacts from African cosmogony. I do an intervention on the clothes as well as the people. Most of the time I do all the props and the accessories. And I show another perception, another look.

For the Zulu Kids series I was inspired by statuettes. In my country, in Guinea, we use statuettes like tools for returning ceremonies. So I deconstructed the body to decontextualize Zulu sacred tools to put them in another context. For that series I received some violent reaction in my country because they perceived that like a sacrilege. In South Africa the statuettes and masks aren’t from the same culture. So it was really welcomed in South Africa. In Guinée it wasn’t welcomed because it’s a tool we use for rituals, so it’s kind of sacred.”

“He uses strong symbolism to talk about some of the things that he has experienced. A lot of these paintings are rooted in his own personal experiences. Black Passport is about his experience traveling as a person with an African passport. He’s talking about things like racism, denoted by the banana. And also using the razor as a metaphor for hypocrisy in the system. So you see the little passport photo. Most of his paintings are really about his own personal experiences.”

On ‘To Kill or Allow to Live’:

“I work a lot with the history of photography and the relationship between the medium and political landscapes. Most of my work has to do with how photography is implicated in the construction of racial stereotypes. So these works are more about inserting characters that I think are forgotten in history.

This one here is called To Kill or Allow to Live. It’s taken from an article called Necropolitics by Cameroonian theorist Achille Mbembe, who is based in Johannesburg, South Africa at Wits University. In this article he talks about how one of the things that makes a state sovereign is its ability to decide who lives and who’s allowed to die. I was making it in response to some news that had come out last year around the Black Lives Matter movement. And just thinking about the idea that essentially we’re finding ourselves dodging the bullet of justice, so as opposed to justice working in our favor, it actually is what’s harming us… So this is our historical relationship that we have with the state as black bodies, that go back to politics that were happening especially during the Reconstruction era, which a lot of this clothing is taken from that time.”

Ayana V Jackson, To Kill or Allow to Live, 2016. Courtesy of Gallery MOMO.

Born in New Caledonia / Grew up in Somalia / Raised in France / Currently in Seattle, USA

“The artists that I work with are artists who are of course of my personal, subjective aesthetic. And artists that are working in Africa, from Africa, as much as photography. So these are the two focuses of the gallery.

The gallery in the past two years has been expanding and developing in attracting voices from other continents–from South America, from the Middle East, from Asia. And I think it’s very important for me to fuse all of these artists in the context of international artists and contemporary artists. And of course people associate me with African art, because I am African and I’m also fighting to reduce the under-representation of artists from Africa. And I’d really really really like to make sure the attention is shared and equal among the different artists.

10 Litres of Air [The Divers II] actually translates very much to Ruby’s practice dealing with themes very dear to her, [such as] displacement. Her way of occupying different spaces, of having lived in different places. This work has a lot of depth and multi-dimensional aspects… It’s related to all this conversation that we have on your background, and who you are, and what kind of an artist you define yourself as. And so the astronaut, and all this kind of levitation that you can see, to me represents the artist on expansion who wants to discover new territories, and fabricating all of these new territories in her drawings. She is willing to get out of her comfort zone and to focus on all the unexplored territory, rather than, ‘oh you’re the artist from this place,’ or ‘you’re an artist from Brooklyn,’ or ‘you’re an artist from Nigeria.’

She also portrays herself in most of the drawings. You can see her with the leopard for example. She’s always present. But this is her alter ego. I find her work extremely light and delicate. I really really connect to her work in its most personal way. We always have to justify where we’re from, when in fact it’s one of the toughest questions. I find myself pretty global.”

On ‘Name Dropping for the African Industrial Revolution’:

“I like to do portraits of people and flowers... This series is called Name Dropping for the African Industrial Revolution. It’s a series of drawings [I started] two years or so ago when I was teaching in Luanda. I started to do them because I didn’t have documents for class, like magazines, wood and stuff. The library was really poor. So to program class, I thought ‘well maybe I could do these portraits of other painters from the city [Luanda]’. And that would be interesting for the students to see and relate the faces with the name of the painters and the artists who are in the city. And then I did some painters, and then I started to do architects, musicians, poets, filmmakers. And then after a while I started to do people that were not from Luanda, Angola. People that I found it would be interesting to know their work. Most of them are other artists. But then I started making politicians that were important in the independence movement of the 60s and the 50s and the 70s.

The last drawing I did was 596. I wish to get into one-thousand soon. It’s an ongoing project.”

Ibrahim El-Salahi, In The Present II, 1994. Courtesy of Vigo Gallery.

On why he considers his black and white works to be his most important (Quote provided by Vigo Gallery from a February 2016 interview conducted by Reya El-Salahi for SUITED):

“I think it is something to do with a study of the color black in itself. This came out after I had been in jail for a number of months in Sudan. I concentrated on a study of

black as a color in itself. It took me seventeen years, from the late 70s up to the mid 90s. I concentrated only on black and not on any of the range of the rainbow, any at all. I realized it was a color itself. And it has the potential to represent other colors as well, within it.

Apart from the fact that I felt very much at ease, creating a picture of black and white. And the black of course has the opposite, which is the white. And the in-between, the hybrid which is produced, is the link of the black and the white, to create a grey tone. So the grey tone, which is a baby, is a link of the white with the black. So it is such a long time. I find that I did a large number of works in black and white which have been quite significant to me, at least.”

Words and interviews by Alyssa Klein

**Correction–March 12, 2016: An earlier version of this article stated Gallery MOMO was part of the Armory Focus.