Forget NYFW: These Are the Fashion Weeks You Need To Attend in Africa 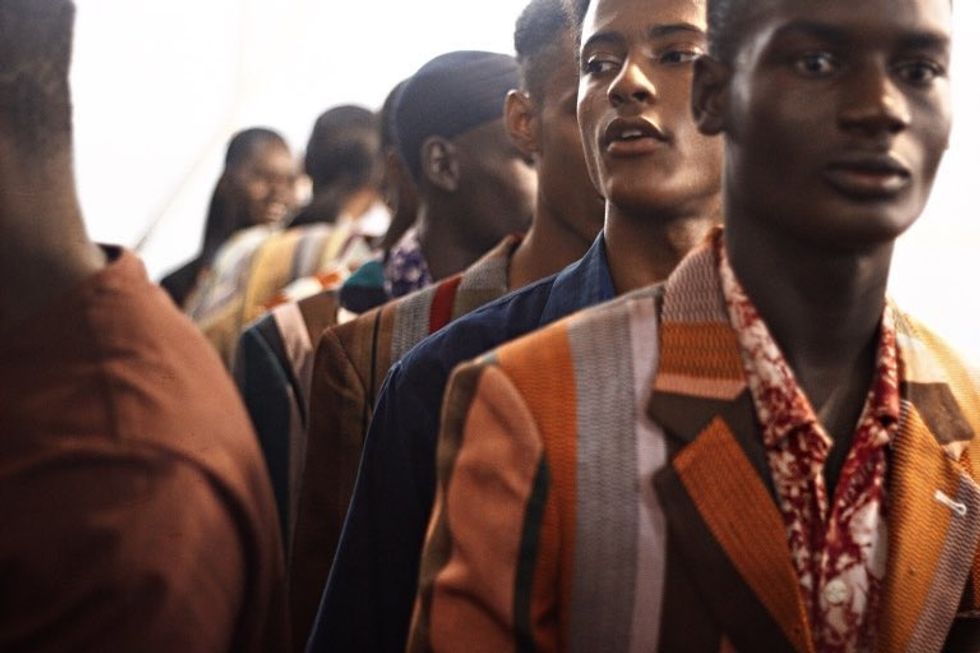 Last week kicked off the year's global fashion week calendar with New York Fashion Week. Afterwards, fashion editors, bloggers, photographers, models and stylists will then head to Paris, London and Milan to complete the season. However, the world's most populated and youngest continent with a clothing industry worth between $15-$31 billion continues to be ignored.

Increased education levels on the African continent, rising gross domestic product (GDP) and more stable economies have led to a rising middle class with more disposable income to spend on fashion. As Swedish photojournalist Per-Anders Pettersson, who photographed fashion weeks in 16 African countries for a book titled African Catwalk, says: "The modern African consumer is becoming more sophisticated." Although there is no official calendar for African fashion weeks, almost all of the 54 countries on the continent hosts some sort of fashion event.

Below you'll find OkayAfrica's guide to some of the major fashion weeks around the continent.

Joburg is a city known for its glitz and glamour and its fashion week draws big name celebrities. There are two official fashion weeks in Johannesburg, the first being Africa Fashion International (AFI) Joburg Fashion Week. It aims to support new designers through their fast track incubator program. In a 2017 interview with the New York Times, Bryan Ramkilawan, the head of fashion at Africa Fashion International, says of their mission for JFW: "We want to be able to buy collections from the designers and get them into stores."

The second official fashion week on the Joburg calendar is South Africa Fashion Week, which claims to be "the only business-to-business platform that markets and promotes designers throughout Africa and are the authoritative voice on the business of fashion." This is done through pop ups during the fashion weeks and a trade show for buyers to purchase designers' collections for mass market. Other fashion weeks that take place in Joburg include Soweto Fashion Week. Joburg Fashion Week and South African Fashion Week's Joburg edition both run bi-annually.

African Fashion International is the main organizer of Cape Town Fashion Week. This long-running event features established designers like Gavin Rajah as well as industry darlings such as MAXHOSAby Laduma label. The purpose of Cape Town Fashion Week is to support established and up and coming South African and African designers and to encourage South Africans to buy homemade textiles. As Cape Town Travel states, "The event, which hosts the country's most fashionable—both on and off the catwalk—fittingly plays out against the backdrop of Table Mountain one of most recognizable, and naturally beautiful, landmarks in the country, if not the world." (Tip: If attending Cape Town Fashion Week, stop by the Zeitz Museum Of Contemporary African Art (MOCAA) to see their fashion and costume institute.)

If there's one thing people from 'Lasgidi' know how to do, it's to dress fashionably. They are just as comfortable in western brands as they are in outfits made by local designers which are first seen on runways at Lagos Fashion Week, GT Bank Fashion Weekend and Arise Fashion Week. Lagos Fashion Week is the most popular one and was founded by Omoyemi Akerele, who in an interview with The Guardian Life Nigeria said, "For us, it's always been beyond fashion week. It's not just an event; it's a platform. [Style House Files] has developed and executed strategic initiatives to support and strengthen the industry. Lagos Fashion Week is one of them." Designers who have showcased at LFW have gone on to showcase in Milan and Paris. Physical stores in Lagos like Temple Muse, Alara and online sites like Jumia are examples of where the designer outfits are sold.

The Tanzanian city of Dar es Salaam has hosted the Swahili Fashion Week for 11 years which is billed as "the biggest and largest annual fashion event in the whole of East and Central Africa providing a platform for fashion and accessory designers from Swahili speaking countries and beyond to showcase their talent, market their creativity and network with clientele and the international fashion industry." In addition to runway shows, there are pop up shops, a bazaar and an awards show to honor designers, fashion journalists, bloggers, stylists and more.

Ghana has long been known in the minds of lovers of fabric through its kente cloth, but the annual Ghana Fashion and Design Week shows that there is more to Ghana that a single fabric. GFDW has several aims such as to lead and develop the industry which outside of the runway shows is done through workshops and seminars, mentorship, showroom experiences, popups and networking events.

There is also the Accra Fashion Week which, according to their website, is "Ghana's premier fashion week destined to make Accra city a fashion capital." Accra Fashion Week focuses on production, manufacturing and distribution. Designers who showcase hail from countries such as Nigeria, Togo, Ivory Coast as well as the diaspora (the United States and the United Kingdom). Students of design schools Imperial Fashion Design School and Riohs Originate also participate. Guests can also shop looks they see on the runway via the website. Another important fashion week in Ghana is the Mercedes Benz Fashion Week Accrawhich in addition to the car brand is sponsored by Maybelline and Samsung.

Ethiopia is one of the few African countries where local brands are able to source and manufacture material locally (leather and cotton are produced). For instance, Sole Rebels, a company founded by Bethlehem Tilahun, has received many awards and recognition for her made in Ethiopia footwear brand.

Addis Ababa, the capital city is where the annual Hub of Addis Fashion Week takes place every October. HAFW takes advantage of the fact that Addis is the headquarters of the African Union, meaning a large number of their audience includes diplomats and their spouses. It showcases this diversity through the countries represented by the participating designers. The 2017 edition featured runway designers from South Africa, Senegal, Tanzania alongside events like popups and masterclasses.

Dakar, Senegal has been a cultural hot spot for many years starting in the late 60s with the hosting of the World Festival of Black Arts and the Dakart Biennale, which started in the 1990s.

Dakar Fashion Weekbegan 16 years ago, making it one of the longest running fashion weeks on the continent. It was founded by Senegalese designer Adama Paris and the 2018 edition featured about 32 designers from over 10 countries such as Tsemaye Binitie from Nigeria and Thula Sindi from South Africa alongside local designers. One of the days of Dakar Fashion Week is dedicated to a street fashion show that takes place in a working class neighborhood and is open to the public for free. Although not as well known as other fashion capitals like Lagos or Joburg, that may be finally changing with the 2018 edition receiving coverage in Vogue and a style shoot in the latest issue of GQ Style magazine. Fashion director Mobolaji Dawodu stated of folks from Dakar, "they're not scared of any type of print. The prints and colors are dynamic."

If you've ever seen Solange's "Losing You" video, you would recognize the flamboyantly dressed men in bright colored suits. Known as Sapeurs, the dandy men hail from the Democratic Republic of Congo, a country that once had a national dress code during the 'authenticité' era imposed by it's former President Mobutu. Congo Fashion Week was founded by Marie-France Idikayi. According to the website, its mission is "to promote Congolese and African fashion, upcoming and established designers to the fast, ever-growing international market."

Alongside the runway shows, there are showroom expos where buyers and potential clients can see the clothing up close and make purchases. In an interview with the Guardian and Ottawa Citizen, Director of Congo Fashion Week Nancy Kondo says, "Congolese people are the forerunners of African fashion…We like to speak through clothes. We want people to notice us for what we're wearing...We'll wear an all-yellow ensemble to a morning meeting." Vlisco, a Dutch company that produces wax print fabric sold across the continent has taken notice and has decided to capitalize on the purchasing power of the 10 million people that live in the capital city. Six years ago, they opened an office and flagship store, becoming the first European fashion business to do so.

Dates: The seventh edition of Congo Fashion Week was held in August due to elections taking place in the country this year. The annual even usually takes place during the month of October.

UPDATE 09/14/2018: A correction has been made to reflect the current fashion week event in Kinshasa—Congo Fashion Week—as Kinshasa Fashion Week is now defunct.