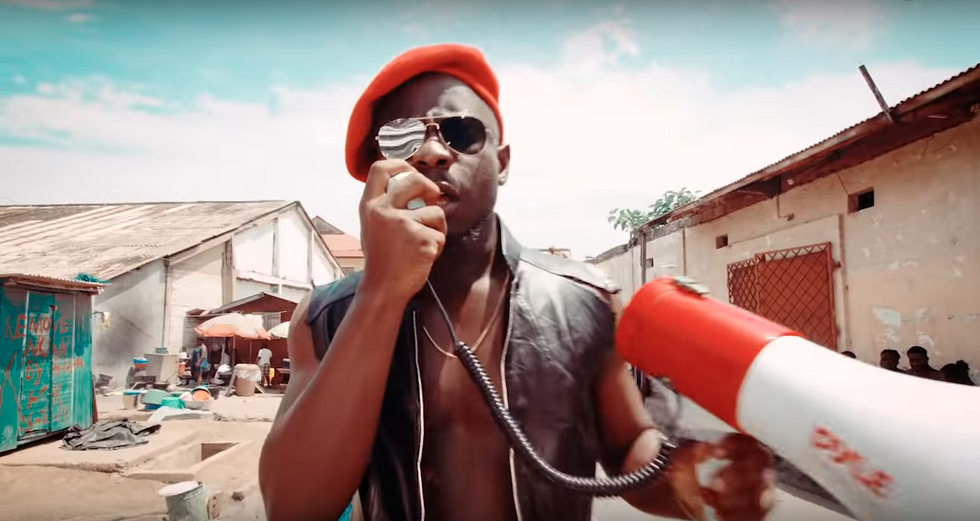 New kid on the block Joojo Addison presents the follow up to his wave-making debut "Guy Man". This one is a hustler's anthem titled "Yessa Massa", and the artist maintains his style, delivering another charming contemporary afrobeat song full of highlife guitars, shrill backing vocals, and several rap-sung quotables. "Money wey dey quenchi fire, cop the Benzo for my mama!" —Nnamdi Okirike

Bisa Kdei is a folklorist in the best sense and roundly convincing in this iteration of highlife which celebrates a period long before the genre's heyday of the 1950s and 1960s. Kdei's revivalism is serious-minded and expertly rendered even when this video clip recalls the era in a comical manner. French chants nudge the song towards coupe decale, originating in Ivory Coast while the steady and tight polyrhythmic drumming and prickly electro guitar is common to both genres. —Sabo Kpade

Ghanaian highlife royal Bisa Kdei released this song from his 2018 abum Highlife Konnect as a single—and rightly so. "1924" is a nostalgic bop designed to take you back to the olden days of Ghana, typically called an "old timers" song. Bisa does what he does best on this highlife joint, and even if you don't understand Twi, the contagious groove surely won't be lost on you.—Nnamdi

This month's lot of releases by Shatta Wale range from the antagonistic "Social Media Gangsters" to the plaintive "Juju," the redemptive "Deliver Me" and the motivational speak of "When You Fail." The best of the lot is this 30-minute freestyle session he recorded with a guitarist in which his many gifts for melodies in a variation of styles—from afropop to highlife, dancehall, reggae, RnB and highlife—and whatever else came to mind. With a spliff in hand and egged on by Parker's attentive guitar playing, Wale is serious and playful but never not in creative bliss when improvising . Brilliant! —Sabo

R2Bees and Wizkid is a combination that simply can't fail. The trio has delivered hit after hit, and this one right here is no different. On "Straight From Mars," a cut from R2Bees' just released full length album SITE 15, the three afrobeats titans display their chemistry yet again, cruising their way through the chill head bopper. —Nnamdi

Who needs video models these days? Becca and Ycee make a feast for the eye in a variety of snazzy outfits. Their on screen chemistry is reflected in the way they overlap each other's singing in a seductive drawl, nothing like the nonchalance expressed lyrics about public opinions about their forbidden love. —Sabo

Producer artist Magnom releases this brand new single titled "Maintain," which is a collaboration with artists KaySo, Quamina MP, Twitch and Almighty Trei, all from the buzzing Ground Up music collective. Each artist expresses his ambitions as well as the conviction they have to see them through as they float their way through this afrobeats joint. —Nnamdi

Weaving lyrics on the theme of "maintain"—pidgin slang loosely used to denote having wealth, a good time or whatever the fancy is, really—each featured guest turns up strong verses with individualised cadences that range from RnB, some rap but lift often from ragga. —Sabo

Rapper, singer, and producer E.L drops his first single of the year, this bouncy afropop cut titled "Higher." Despite still dropping quality music, the tried and true hitmaker has been having a low season for quite a while now, but hopefully this motivational joint is word and sign of better things to come. —Nnamdi

The type of song that sparks a parody of a worship service in a club and that is genuinely intended. —Sabo

Omar Sterling's short and neat verse on "Yesterday" is near perfect except for the last throw away line. Intended to showcase their versatility, "Yesterday" is a soothing confection of pleasant guitars and soft drum arrangements. The video features a comic turn by Darkovibes, the mercurial singer-songwriter who joined the group on their current US tour with a UK date on May 3. —Sabo

Kojo Funds x DJ Spinall 'What Do You See'

Kojo Funds' strong vocal performances may seldom get credit for appearing effortless. On "What Do You See," a perfectly weighted chorus sung over mellow arrangements identifies the sound as 'afroswing'—a dominant sound in London - but it's in fact "pon pon," on account of the soft pair of twin synths. The collaboration with Nigerian DJ Spinall will go some way to popularise the song in the sister markets of London (where Funds is a reputed name) and Ghana (where Funds is from). —Sabo

Darkovibes is entertaining as Mr Naughty while the celestial traits in Efya's voice makes the refrain of "anywhere" even catchier. —Sabo