The Best Ghanaian Songs of 2018 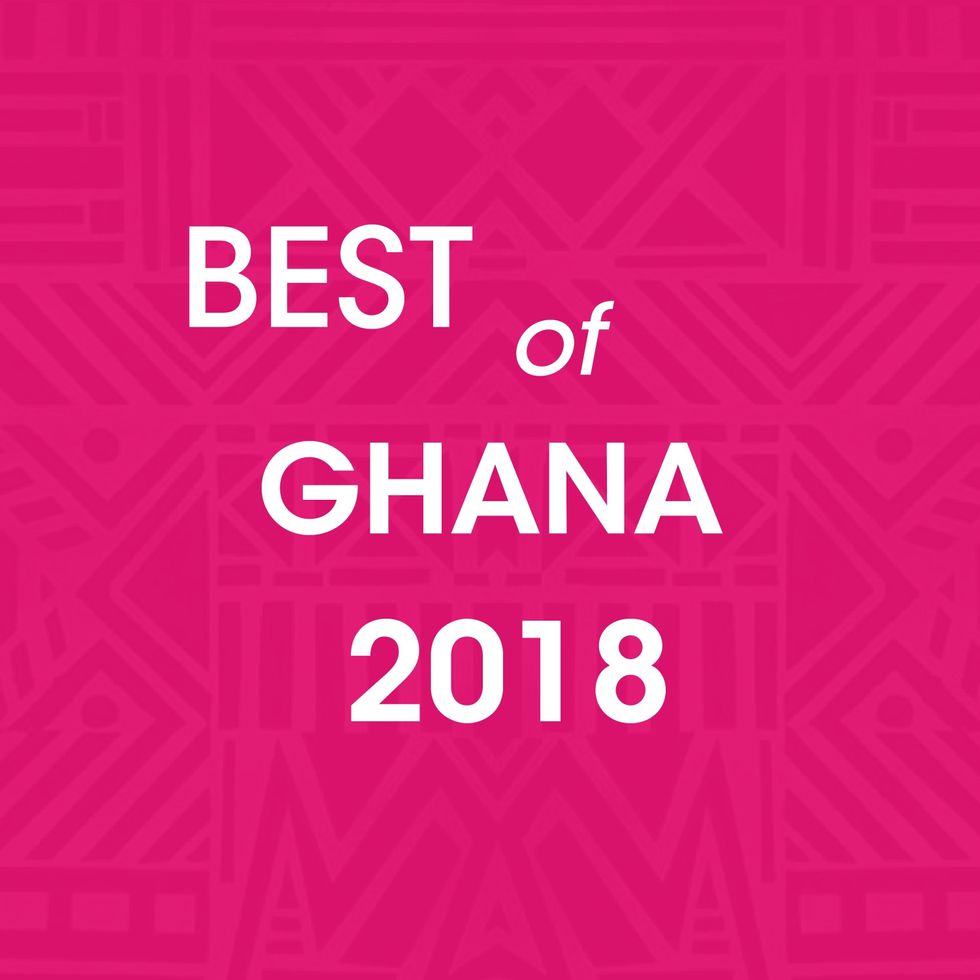 Welcome to our inaugural list of the Best Ghanaian Songs of the Year.

The big name artists have made impressive showings in 2018, as did a swathe of newcomers who are making commendable strides towards their debut projects and establishing their identities. Even more refreshing is the emergence of emo raps in the music of La Même Gang. Friction between Sarkodie and Shatta Wale may divide fervent fans but it's made for some energetic competition and debates in what's been a big year's harvest of soundscapes, styles and good fun.

Read along for our selection of the Best Ghanaian Songs Of 2018. Listed in no particular order. —Sabo Kpade

"Akwaaba" is undoubtedly the biggest Ghanaian dance anthem of 2018. Banku Music in-house producer Guiltybeatz dropped this as his debut single featuring Mr Eazi and rappers Pappy Kojo and Patapaa. The song and its accompanying dance went viral shortly after its release, and it has been seen on dance floors all over the world, instantly putting the producer on the map.—Nnamdi Okirike

A tale of well wishes to well wishers that may also double as a rebuke to naysayers, "Wish Me Well" excels as a secular gospel song in the way it combines personal triumph with religious innocence. Kuami Eugene traces cadences and techniques—like some signature ad-libs and the hook's cluttered refrain and sweet melodic lines—that are reminiscent of Wizkid, but without a smudge on his own singing talent. —Sabo Kpade

"Feels" is one of the hardest Ghanaian hip-hop songs you'll hear this year. Elite rapper M.anifest delivers a potential anthem featuring rising rap sensation Kwesi Arthur who demonstrates his hook-making skills. M.anifest laces the track with introspective and inspirational bars, reflecting on his wins on the instrumental produced by MikeMillzOnEm. —Nnamdi Okirike

As is evident all throughout his latest album, Reign, Shatta Wale reaches new emotional heights when he beats in his gravelly voice about his life struggles. This is proven on "Life In Nima" and elsewhere as on "Alakpator" and "My Level," which presents humility while insisting on his status. —Sabo Kpade

A-list rapper Joey B dropped a banger featuring the Ghanaian cool kid music collective, La Même Gang. Maintaining the cowboy ethos he adopted in his last project, the Ranger EP, the rapper sticks to the template, presenting the American Western aesthetic in the artwork, visual, and even the production of "Stables"—fast paced guitar chords over a trap beat produced by Nova. La Même Gang members Darkovibes, RJZ, KwakuBs, Spacely, and Kiddblack each deliver their own verses, finishing up a hip-hop joint you won't be forgetting any time soon. —Nnamdi Okirike

Amaarae is one of 2018's best discoveries. A petite songstress with multicolored hair and killer fashion sense, she delivers R&B and soul with dreamy sultry vocals that have you feeling like you're in the clouds. "Fluid" is a cut from her debut EP, Passionfruit Summers. Both the song and its video draw you in immediately, starting from the atmospheric production to the colorful and pleasing visuals. The singer uses every tool at her disposal to pull you into her world and get you hooked, and we're definitely not mad at it. —Nnamdi Okirike

"We fit fight hard we fit beat Naija / why you dey fear? Them dem breath like us" rails E.L on this big push back against the dominance of Nigerian artists on Ghanaian pop music. He rallies his country men: "the whole Africa go shock when them see what's inside us / but the whole quality for rise up / mediocrity for die kraa."—Sabo Kpade

One of Ghana's new superstars, KiDi, has delivered hit after hit of great afrobeats tunes. The singer employs a proven formula of catchy lyrics, sing-along hooks, and easygoing highlife-influenced instrumentals that make his love songs instant anthems. "Thunder," a song that will definitely have you singing along at first listen, is no exception to that rule.—Nnamdi Okirike

"Nana" is a pledge of unbridled love and loyalty by Ghanaian pop royalty that makes one wonder just how delightful and influential a joint album à la The Carters could possibly be. Both are in excellent form: Sarkodie is ever compact and precise, his athletic delivery and big boasts the perfect accompaniment to Becca's celestial voice, here, beautifully restrained with light flourishes and echoed with muted vocals. —Sabo Kpade

Eddie Khae "Do The Dance"

"Do The Dance" is a hip afrobeats joint that blew up seemingly out of nowhere. Months after its release, the song by the up-and-coming rapper Eddie Khae exploded into a dance anthem. However the track itself isn't the only star of this show, as its accompanying dance step, as seen in the official video, became the rave of the clubs and dance floors in Ghana. Eddie Khae delivered an unsuspecting hit with this one, and party people all over Ghana thank him for it.—Nnamdi Okirike

Intense and happy friendships between males, as portrayed in the video for La Même Gang's "Stone Island," are a rarity that the song itself, melancholic as it is, could only achieve in parts. A strong sentiment such as, "I felt bad when homie said send me cash and I can't do shit for him / I felt bad when he buried his dad and I showed up late for it" speaks of a private shame while in the video, a shot of the group shirtless and cuddled up in bed is strikingly tender.—Sabo Kpade

Newcomer Akwaboah is a songwriter and vocalist signed to Sarkodie's Sarkcess music record label. "Forget" is one of the standout singles from his debut album, Matters of the Heart. "Forget" is a simply beautiful afrobeats tune that has the singer professing his feelings for his love interest, with a guest verse by labelmate and Sarkodie's protégée, rapper Strongman.—Nnamdi Okirike

Expect no less a well crafted song from two of the most convincing singers in afropop. "Mamee" is another brilliant duet by Efya and a male artist, after the gem that is "Could This Be Love" with Mugeez, but this time it's Mr Eazi who deploys more stank in his voice than otherwise known. Meanwhile, Efya repurposes the majesty in her voice in service of a perfectly enjoyable pop song. —Sabo Kpade

The R2Bees and Wizkid combo isn't a new one, and each time the afrobeats heavyweights get together to cook something up, they always dish it solid. "SUPA" is no exception. A laid-back afrobeats joint, it opens with a smooth verse from Wizkid, with Mugeez and Paedae following up to finish it off. The song is a single from the duo's upcoming SITE 15 album. We can't wait to see what else the project has in store.—Nnamdi Okirike

B4Bonah is a newcomer who has demonstrated a knack for delivering thoroughly enjoyable music. This song is the remix to the artist's earlier dropped solo effort, this time featuring an additional verse from fellow Ghanaian rapper M.anifest, which upgrades the already infectious afrobeats song to a 10/10, with compelling visuals to match.—Nnamdi Okirike

Juls and Kojey Radical, two highly-buzzing British-Ghanaian acts, excellent in "Normal," a pairing of vocal virtuosity and sensible beat-making that went to even more complex depths in 2017's "Temperature Rising."

Rising rap sensation and BET Award nominee Kwesi Arthur switches it up to deliver a Ghanaian highlife tune. "Woara (God's Engineering)" is an inspirational tune that has the rapper telling the things God has done for him, and giving thanks for his recent successes. The song flew up the charts in Ghana immediately after its release, becoming Kwesi's biggest hit since "Grind Day."—Nnamdi Okirike

Sarkodie extols the virtues of hard work and self-reflection with characteristic zest and precision over woozy bass synths and trap drums in this Nova-produced banger, "Black Excellence."—Sabo Kpade

A bar-fest as ferocious as any, the trio of Medikal, Kwesi Arthur and Ahtitude address a pertinent question—"how much be your too much money?"—with enough verve and audacity to make any loaded pocket insecure. —Sabo Kpade

An unabashed title for an unabashed invitation, Wendy Shay makes no bones about her sensual intentions to a love interest. With urgings to "fire, fire," Shay invites as well as challenge her lover with an ego boost "bedroom commando" and an even bigger one promised: "call you my hero." Who could resist! —Sabo Kpade

Beneath the very decent writing and what is a perfectly enjoyable love song in "Abena" is a disciplined R&B voice and technique that will continue to serve King Promise well. —Sabo Kpade

Translating to "it's begun" in Hausa, "Anfara" is a single from one of the new wonder boys of Ghanaian pop, and self-described "youngest in charge," Miyaki. In title and composition, "Anfara" is reminiscent of another song of the same title by ClassiQ, the gifted upcoming Nigerian rapper who is also Hausa. More interestingly, the song presents a new dimension with not just the language—which is rarely used in top layer pop in either countries—but also the melodies and humour, particular to Hausa folk songs. —Sabo Kpade

An unabashed dance floor number that is quick to get down to business, "Bend Down" combines the both MzVee and Kuami Eugene's strengths in pop-highlife, pop-R&B and in-trend dances to make a satisfying song and video which does not out stay its welcome. —Sabo Kpade