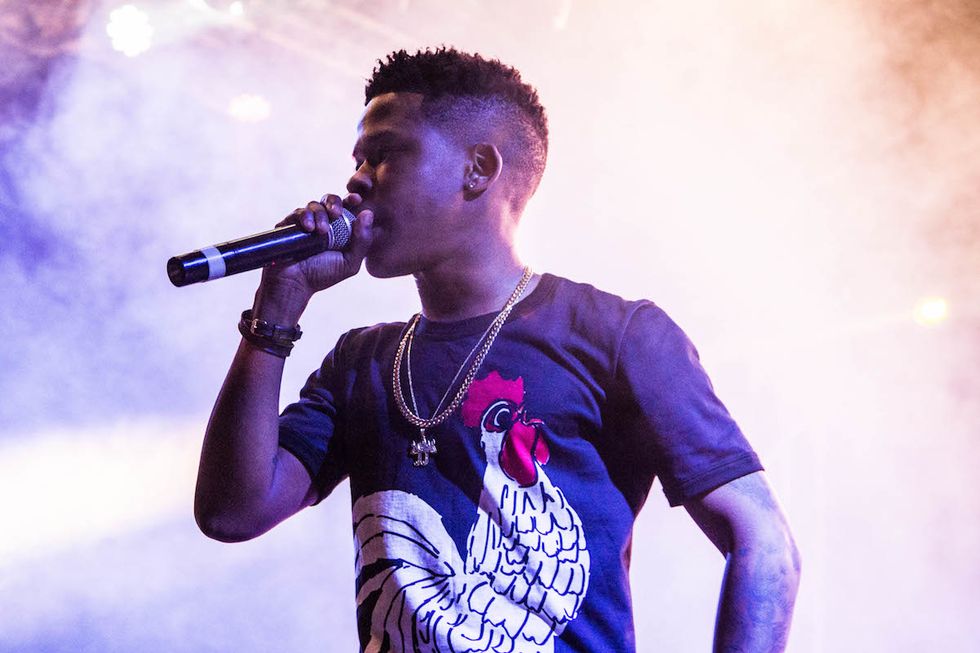 Op-Ed: In his second shot at delivering a South African hip-hop classic, Nasty C didn't so much as disappoint, but overcompensate. This trait isn't unique to him.

What's the value of 10 minutes? You'd probably get 10 different answers from 10 people. For the formidable South African rapper and producer Nasty C, it could be a classic.

That's if he'd shaved those minutes off his brand-new album Strings And Bling. With his latest drop, he's survived the sophomore hoodoo by providing an impressive album that's pretty good, but could have been great had it been shorter.

Over production by Tweezy, Blu Magiq, Cxdy, Gemini Major and The Gobbla, the MC suavely glides over his beats. The album is conceptually divided into the ego-fueled Bling, which oozes self-assurance, and the more introspective Strings.

Over a firmer structure than his previous album (which had an interlude after the intro), the Durbanite snuggles into the pockets of beats and stays there. Delivering lines like "I was diggin' my grave and found gold/ niggaI'm the future you are talking to the bones, nigga," on "Jungle," a sparse track that incorporates the "perfect" chant from Street Fighter, and is way too short. The track served as the lead single alongside the A$AP Ferg-featuring "King," which was itself followed by "Do U Digg," a song that labors the point made in the preceding song and doesn't sound much different.

The title track is aptly built upon infectious guitar strings and is evidence of Nasty C's flow and impeccable ear for beats. For the sample lovers, the interpolation of Adele's "Someone Like You" is perfectly matched by the heartbreak expressed in the Rowlene-assisted track. The rapper offers advice on infidelity on "U Played Yourself." You aren't likely to need the lyrics explained to you, as one of Nasty C's talents is eliciting reactions through his lines. This, however, occurs for the wrong reasons on "Legendary" when he equates sexual relations with racism: "Ain't giving these niggas no breaks/ My white friends let me touch their sisters/ I ain't got no time to be racist."

The line and song shouldn't have made it past the editing phase either. The track neither adds to the listening experience, nor drives the album along. Similarly, the preceding "No Respect" is a throwaway in the truest sense of the word. At 1:25 minutes long, it exists in the purgatory between interlude and song.

Meanwhile, the space between normalcy and fame is explored on "Another One Down." With lines like "I had to learn how to dress my persona," it's a soul-baring, piano-driven song that reminds us that our favorite artists aren't exempt from having flaws. Such mature content is music to the ears, much like Kaien Cruz is on "Everything," a catchy display of Nasty C's singing abilities. The track is tinged with familiarity and has the same feel as Sean Kingston's "Beautiful Girls," and is only edged out by "Mrs Me." The latter bears the impressive line, "I say I'll dig you when it's deep enough to bury me". Kills me every time.

That song should have closed the album, but is followed by the obligatory radio-friendly "My Baby," and a return to the ego with "Givenchy" and "Jiggy Jigga." These are typical bass heavy tracks that duplicate the function performed by "King."

In his second chance at delivering a South African hip-hop classic, Nasty C didn't so much as disappoint, but overcompensate. This trait isn't unique to him, with a host of South African rappers such as PdotO, Zakwe and the whole of Ambitiouz Entertainment crew preferring lengthy projects. It was the same case with Nasty's debut album Bad Hair, an effort weighing 16 tracks. His follow-up beats it out by an extra song, although running for six minutes less.

In a music ecosystem that rewards artists for streams, that addition may seem great, but it overextends an otherwise pleasurable listen. Strings and Bling is neither as tiresome as Drake's Scorpion nor as bereft as Kanye West's Ye, but suffers from the dreaded effects of filler. It befuddles because this album wasn't a return from the wilderness, and his fans haven't been starved of him. We've heard him deliver incredible verses on "Said" with Runtown and Major Lazer's "Particula."

It's precisely this collaborative spirit that plagued Bad Hair, with Nasty's voice drowned out by Tellaman, Riky Rick, Omari Hardwick, Tshego, Erick Rush and the angelic Rowlene. On Strings and Bling, Nasty significantly lessens the features to just A$AP Ferg, Kaien Cruz and Rowlene, who's seemingly his musical soulmate.

The reduction of co-conspirators isn't accompanied by the effective editing of the album, however. A quick glance at this year's acclaimed projects may have helped, with brevity being their shared characteristic. At nine tracks, A-Reece, Wordz & Ecco's L3 (Long Lost Letters) is a gem, while Ms Nthabi's 6-track Broken Silence and Stogie T's 15-minute long God's Eye EP, have both received great receptions.

Across 52 minutes, you're not struck by the album's length, but rather the duplicity of some songs on Strings and Bling. Editing could have made this a more compact offering. Nasty C's musical generosity could literally be costing him the bragging rights of dropping a classic album. It's something Strings and Bling shares with Bad Hair, and you get the sense Nasty C is aware of potentially overloading his albums. With a total of 7 songs running shorter than the standard 3:30 minutes, he clearly chose to go the route of several shorter songs rather than a shorter album. Songs like "Do U Digg," "No Respect," "Casanova" and "Givenchy" could have left room for slightly longer versions of the great songs, though.

The improvement from Bad Hair is palpable, and Nasty C's growth is evident. While witnessing a rapper honing his craft, we're let in on Nasty C's moods, motivations, worries and outlook. Although he continues to express problematic views on racism, he's crafting some undeniably enjoyable music. His next album will probably be the classic he's searching for.