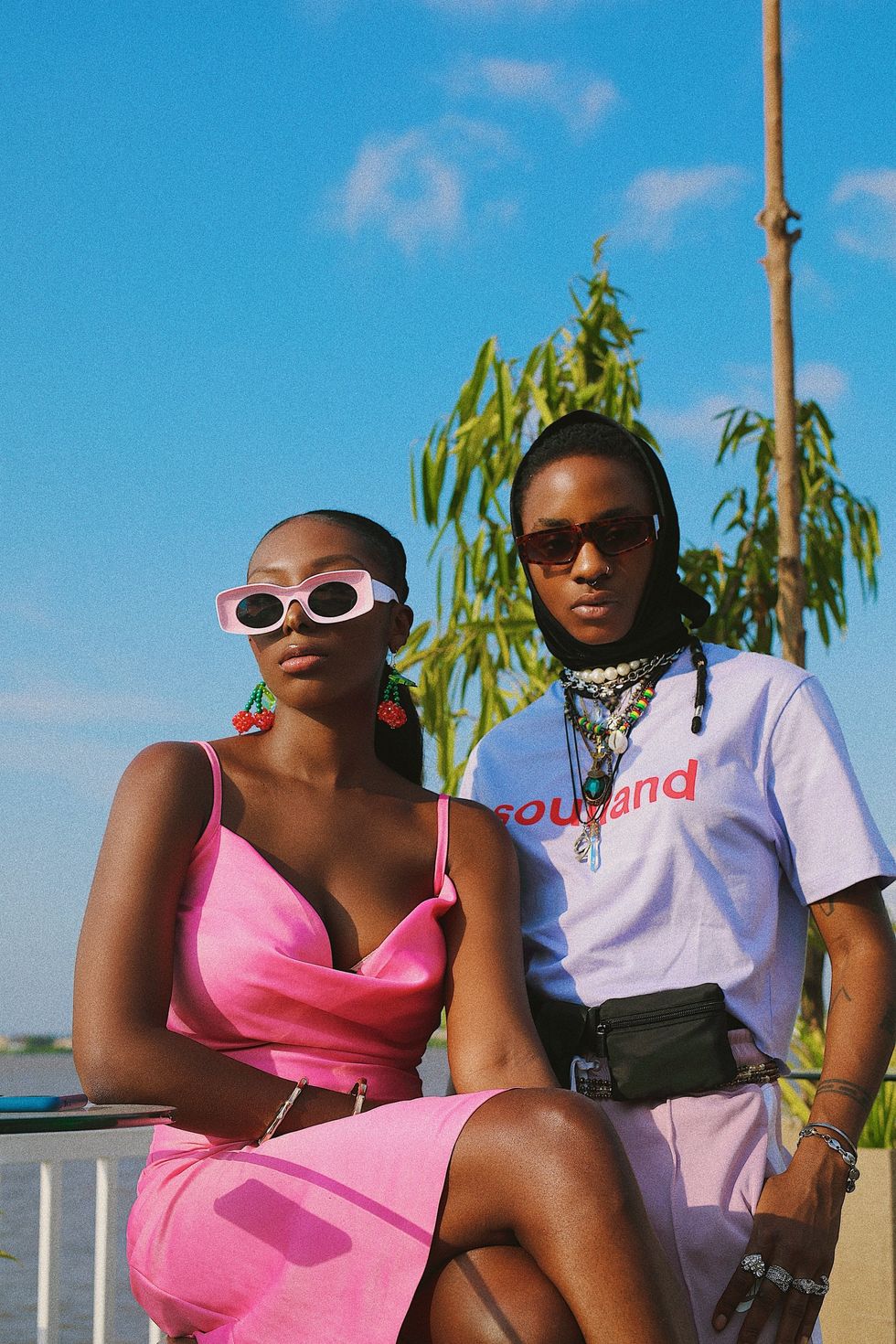 Just like most cultural waves that come from Nigeria, the roots of the alté subculture can be traced back to Lagos. The bubbling populous city is home to innovative hustlers and a large youth population which leads to a lot of experimentation and creation of new sounds and subcultures happening within.

While afro-fusion transcends international borders to become a regular fixture on top of the global charts and a permanent presence in UK airwaves—and as afropop stars like Wizkid and Davido collaborate with global hitmakers like Drake and Skepta—a smaller community of artists in Nigeria is creating a sound and style that is harder to define: it's inherently more experimental and subverts expectations of what it means to create in Nigeria.

By crafting out a style that plays on gendered fashion and refuses to follow conventions, and a sound that fuses varying textures of different genres together, these alté artists have created a disruptive subculture that has earned and grown a significant following.

The term alté—as in alternative—can be traced the 2014 song"Paper" by BOJ, a member of the group DRB, which had the line "The ladies like me because I'm an alté guy." The term would then grow to refer to an aesthetics that is alien to the traditional music and style landscape.

Teezee, who is part of DRB and a co-founder of the youth culture magazine Native Mag tells me, "It's inspiring. We pioneered a movement as outcasts, now everyone wants in. The best part is, we are still young so we are working harder to get to the next level everyday... more kids coming out to do what they want, breaking rules, actively pushing boundaries in every way."

"We pioneered a movement as outcasts, now everyone wants in."

Dressed in a white tee shirt and a generous amount of rings, hand chains and necklaces, many today would consider Wavy the Creator's sound and style 'weird' or 'different.' While the term 'alté' term implies things to be alien, it's important to note that outliers have never been quite alien to the Nigerian music industry. Singers like Charly Boy—a highlife artist—rose to fame in the 80s riding the wave of his experimental style and sounds, armed with his ever changing gender expressions. This might be why Wavy the Creator tells me that although she receives criticism all the time she is unbothered because eventually "they always catch on."

Nigeria is still very conservative, with norms placed deep in its society's consciousness that dictate everything from what you wear to the sort of art you are allowed create. This has led to people whose style and art has been labeled 'alté' being forced to deal with a certain amount of derision, condescension, and invalidation. It's so much so that the term 'alté' is almost considered derogatory. The criticism that this small yet ever-growing community of creatives face comes from both a societal dislike of unconventionality, as well society believing alté artists are being different simply for the sake of being different. However this criticism, and sometimes outright hate, from people doesn't phase the artists, as Wavy tells me, "People will always criticize what they do not understand and that is okay."

'Alté' goes beyond a sound. Singers like Wavy, Teezee, and Santi—one of Lagos' leading alté presences—are regularly decked in clothing that disregards Nigeria's rigid sartorial norms and gender binary fashion rules, even when they're away from the stage or studio.This seeps into music videos that solidify their artistic brilliance: self-directed saturated clips that feature a surplus of stylish youth, experimental fashion and a sort of vibrancy one would most likely not find anywhere else. They're all presented through handycam aesthetics, leaving the resulting work looking informal and intimate.

This is most obvious in Santi's recently released "Raw Dinner" video which is heavily inspired by 90s Nollywood horror movies. Ashley Okoli, a creative director and stylist and one of the foremost leading presences on the alté fashion scene, describes the process of styling the "Raw Dinner" video. "I always draw inspiration from my own style, because my styling is an extension of myself. When I saw the treatment, I already knew how I wanted it to look, and the gothic, sexy elements were right up my alley. it was fun and it was simple, believe it or not."

For people like Ashley, their personal style, much like the alté sound, is hard to define. It is a fusion of several eras, trends, classics and something that is just them. Her refusal to be defined or conform to pre-existing norms automatically makes her an outsider to those outside of the alté subculture, naturally leading to a lot of criticism from people.

"We are bringing the new, the fresh, and the modern to the mix, and that upsets, or even scares, people."

"I don't let it get to me," he says speaking on the criticism her style gets "I wouldn't be me if I did, and that would be tragic, wouldn't it?... Because Nigerians are used to being in a box. A lot of people here aren't used to freedom and seeing creativity—most people are very traditional and stuck in those ways. We, on the other hand, are bringing the new, the fresh, and the modern to the mix, and that upsets, or even scares, people."

However, and despite all criticism, the wave of the alté subculture is slowing diffusing into mainstream society. Emefa Smith, a fashion entrepreneur, is one of those responsible for this. Using her brand The Vintage Smith, Emefa has managed to grow a cult following while demystifying alté fashion and allowing people outside the subculture to partake in it—all while creating designs that have been spotted on the likes of Wavy The Creator, Teezee, Boj and so more.

Despite not being an alté artist herself, the importance of creatives like Emefa in rising the status of the scene cannot be ignored. Emefa, who left one of Nigeria's leading music labels Chocolate City where she was working with artists like M.I Abaga and Victoria Kimani, doesn't bother herself about the sect of Nigerians who religiously criticize the alté subculture. She cares more about the overall scene and its message of individuality, which she believes in.