On Reinventing African Lit: All the Buzz From East Africa’s Biggest Literary Festival 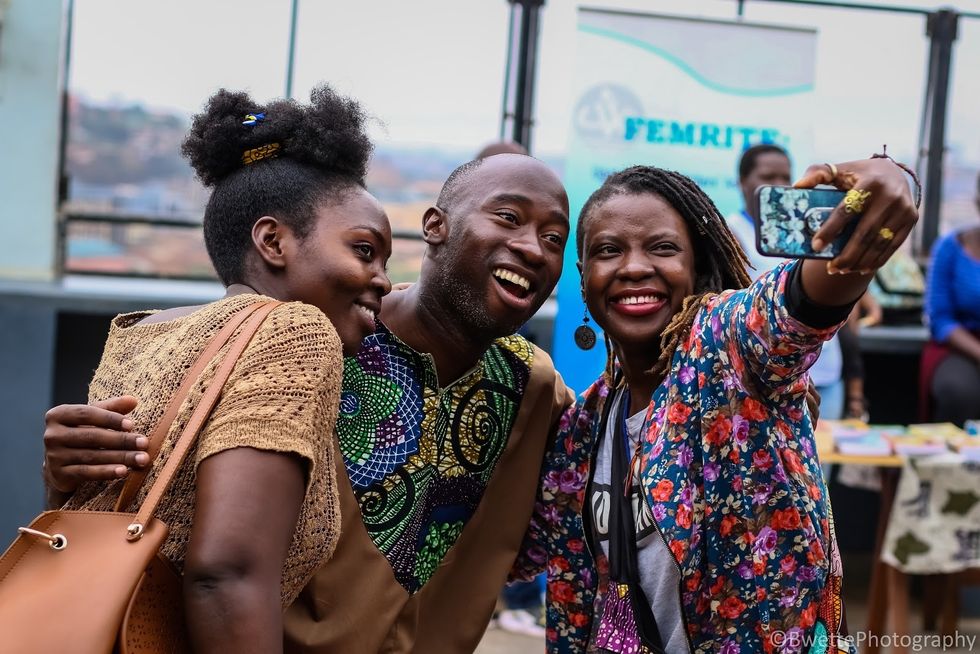 We talked to attendees at the Writivism Festival in Kampala about what makes a memorable legacy in African literature.

Liyong was scheduled to be the opening keynote speaker for the 2018 Writivism festival in Uganda that took place over the weekend in Kampala. Ugandan writers might not dominate discussions about African literature, but Kampala is a city that has hosted the most notorious debates about the genre from the Makerere conference to Transition magazine where writers like Ezekiel Mphalele, Chinua Achebe and Ngugi wa Thiong'o argued with each other about what made writing "African" or "good." Writivism follows that tradition of gathering people from all over the continent in Kampala to discuss what African literature is.

The theme for the festival this year was "Legacy." Since Liyong had said in 1965 that East Africa was a literary desert, there was no one better to reflect on how far East African literature had come. In his keynote, he proclaimed that the novel Kintu (2014) by Jennifer Makumbi had finally broken Uganda's dry spell. Makumbi was great because she had mastered the art of long form narrative, critiqued Ugandan royalty, and managed to "graduate from a muslim college in the East and still remain interesting." She was the writer Liyong had been waiting to read for forty years.

Following Liyong's opening speech were two days of panels, readings, and book vending that all took place at The Square, a rooftop event space in Kampala's industrial area. Some of the highlights were Dami Ajayi's book launch for his poetry collection A Woman's Body is a Country and readings by newer writers who were shortlisted for Writivism's Koffi Addo Creative Nonfiction Prize and the Writivism Short Story Prize. The winners were announced Sunday night and the prizes went to Chisanga Mukuka for her story "Belonging" and Mbogo Ireri for his story "Hopes and Dreams." As Liyong gave out the prizes to the Zambian and Kenyan winners he joked about how happy he was to see a non-Nigerian winner, and that he hoped next year the winner would be South Sudanese.

But the best discussions happened in between the events, as people ordered drinks from the bar and went on rants about the difficulties of accessing African books in different African countries. The best part about casual conversations with editors and writers at the festival was being able to walk away with some free books and magazine issues by simply asking people I met what they were working on and if they had copies with them.

The weekend was haunted by Liyong's opening remarks, after all there is nothing that sparks a debate faster than declaring one Ugandan writer in forty years as truly mastering the artform of writing. I asked some festival goers if they agreed with Liyong's keynote and how they would define legacy instead.

Here is what they had to say:

"As a child I read a lot of Kenyan literature, I only got to see Ugandan writers as a young adult. I loved Ugandan literature not because it was good literature but because it was Ugandan and I could relate to it. But I agree with Professor Taban, Jennifer Makumbi came and she is the best. It's great to see the elders here and to hear from them. As we lesbians like to say, we are seeking the older wiser lesbians."—Tracy, attendee.

"I think there is a big generational gap with Taban. I look for more forms of expression when I think about great writers. I had a problem with Taban saying we have waited 40 years for Jennifer Makumbi. Does he read short stories or anthologies? What did he mean when he said only she has mastered the art of creative writing?"—Harriet, writer and editor of Word Oven.

"I have to disagree with you there. I don't think we should stop talking about colonialism. Even here in Uganda, we can't talk about Uganda and not talk about how they were colonized. The problem is we tend to sit on our history instead of talking about it in a way that does not make it a limitation.—Tobi, editor of The Book Banque

"I think in discussions of legacy what is missing for me is thinking about African literature in different forms other than the written form. Oral tradition has not been considered in these discussions at the festival. We should give space to other forms of storytelling."—Anike, curator at Òrò Àníké.

"Listening to Taban, I still was not convinced about privileging the novel. I'm a poet. Poetry is close to music. And if you think there is any form of art that could have the popular effect of carrying the crowd along it's probably music. That's gonna bring the revolution."—Dami Ajayi author and founding editor of Saraba Magazine.

"Telling our stories and telling them properly is legacy. When people think of legacy they might think Bessie Head or Dambudzo Marechera. Legacy to me is simply someone who connects well with their readers."—Kearomo, writer and book hoarder.

"We just crossed the five year marker for Writivism. Last year our theme was reinventing the future and we were thinking about where we are headed. But as the saying goes 'you can't tell where you are going without knowing where you are coming from.' So if we are going to redefine African literature we have got to talk about the past. That's why we chose this theme and the speakers." —Roland, Writivism festival curator.

"Life as lived by cows and other animals is not reflected over. Cows just eat grass from year to year. Human life is reflected over. We think and we speak. There is the big jaw, the little jaw, the joking jaw, the judgemental jaw. A big jaw crushes everyone who speaks, the little jaw is quiet. Writers are the judgemental jaw. If you want to tell jokes that is fine, but to have a legacy you must stand for something. I also want to say apologies, apologies, for making people think that Ugandans haven't been writing. Let more rain rain and Ugandans write."—Taban Lo Liyong, writer and philosopher.

Check out more photos below from the Writivism Festival in Kampala.