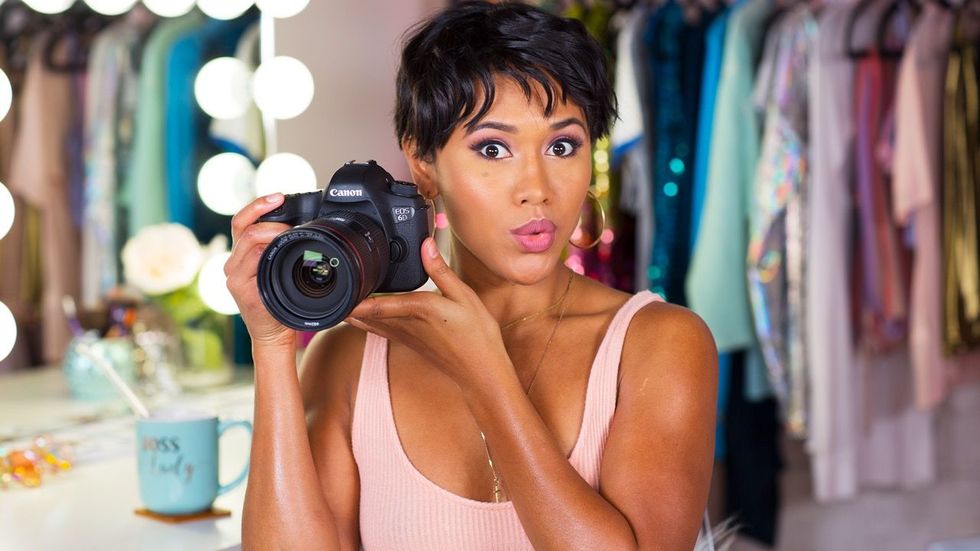 We catch up with Shameless Maya on her five year anniversary on YouTube, what keeps her inspired and more.

If there's someone to look to as an example of how to be fearless and own your gifts and talents, it's Maya Washington. Known as Shameless Maya on the internet, Washington is a fierce maven on YouTube, an actor and creative producer.

I first stumbled on her videos four years ago when I began my natural hair journey. YouTube was the place I went to in my many attempts to figure out how to take care of my hair. Her fun, yet super informative tutorial showing how to take care of curly hair featured women who had different curl textures, as well as the products they prefer to use when they wash and style their hair. I was hooked and of course backtracked to her past videos from the year before.

Not only does she go out of her way to put people on and share her wealth of knowledge on beauty, wellness and tech (to name a few), she started the #BESHAMELESS movement—where she shamelessly promoted herself on YouTube for one year to overcome her fears and to gain confidence, as well as calling on everyone watching to do the same.

Washington recently celebrated five years of being shameless. Since then, she's garnered over 880,000 subscribers on her coveted channel, with a solid following on Instagram (which is gorgeous to look at, btw) and Twitter. She stars in Google's original series God Complx and feature film, Alaska is a Drag. She even had the opportunity to work with Prince as his photographer and creative director for his album, Art Official Age.

Along with continuing to plan her event celebrating this milestone, which she says is a big production, she's also looking to make merch available, including her Shameless Manifesto that you can fill out, frame and hang up on your wall.

“We're looking to sell dad hats, totes, and specifically a Shameless Manifesto—it's something I'm really passionate about," Washington says. “It seems really simple, but I feel that words are powerful—and written word is very powerful—so I created a manifesto that asks you to write down what it is that you want, what are you willing to sacrifice to get there, and what are you willing to do to get it. It's nice to have a constant, inspiring visual reminder that, 'This is a promise I made to myself and I'm going to see it through.'"

I spoke with Washington via Skype where she touched on her experience working with Prince, what keeps her inspired and how to handle healthy doses of self-doubt. Take a look at the gems she dropped during our conversation below.

For me it's a matter of prioritizing tasks and projects. I think for anyone who is running a business or trying to grow and excel, the key to that is time management. A lot of things I used to do as a creative which was to do what feels right—I still do that 'til this day, but there also is an element of priorities and once you accomplish one task, you can cross it off and go on to the next.

On working with Prince

Working with Prince was great, it was one of those once in a lifetime opportunities that lasted several months—I was working with him as his photographer. He approached me as a creative to [a] creative; he really admired my photography work and not many people know that I was a photographer and I have my photography website still up, roaming around the internet. He found it. We worked together. He was just a dope creative who was inspired by people who were talented.

He always surrounded himself with talented people—so I felt really privileged to be in his circle of talented artists and he always had people around him inspiring him. And that was a good learning lesson for me, just to constantly be surrounded by creatives and constantly be inspired. And he's just really down to earth—nothing you would probably expect—at least for me I didn't expect him to be as easy going as he was.

On what keeps her inspired

If you know anything about my channel, I'm very spiritual. For me, it's my relationship with God that's my number one inspiration. Beyond that it's the people and the places around me—I travel a lot. Living in New York was a different energy than it is living in Los Angeles. The content I produced was very different than it is in Los Angeles so, depending on where I am and the people I'm around are my major inspirations. And of course, my viewers who comment in the comments section letting me know what they're inspired to watch, things they need help with—that definitely inspires the choices I make and the content I produce.

Maya's three things to know when starting a platform

And I'm going to throw in one more so there will be four C's—Consistency: Producing consistent content and staying consistent. I've seen a lot of creatives where they didn't start out strong for them, they just consistently produced content.

I don't know if there necessarily is a formula for YouTube success, because when you start getting very specific, it can be challenging because what you want and the path that is probably laid out for you may not be in alignment, and it might just be a part of your journey. I hear a lot of, “How come I can't grow, how come I can't do this or do that" and I'm not God, but I do know from my own personal experience if something isn't working, I got to try another way. For me, YouTube was the other way. YouTube was never an end goal—it's definitely a channel and a means—but for me the bigger picture is to always create and to always inspire while being inspired.

For me, instead of looking at it as an imposter, I look at it as, “No, I know exactly what I'm doing." Confidence I feel comes with years of experience, so I feel I can confidently say I'm a creative, I'm an artist, I'm a YouTuber—before it would be uncomfortable to say, but I can confidently say so since I've been in the game for 5 years. I think initially in the beginning feeling like an imposter is a very common feeling to have. But [you can build confidence by] just studying your craft—understand and know what you're doing. So when you're being tested, you have the confidence to say you know what you're doing. And even if you don't know what you're doing you can figure it out—you should never stop learning.

And I think it's good to have a bit of questioning and doubt in your skillset because it just forces you to want to do better and to learn more. When you walk into a field and you are uber confident and you have zero doubt and you've never questioned whether you're an imposter or not, if anything I'm more afraid of those people. I think every healthy artist has a healthy amount of self-doubt. And I think that's good, because it forces us to be better.