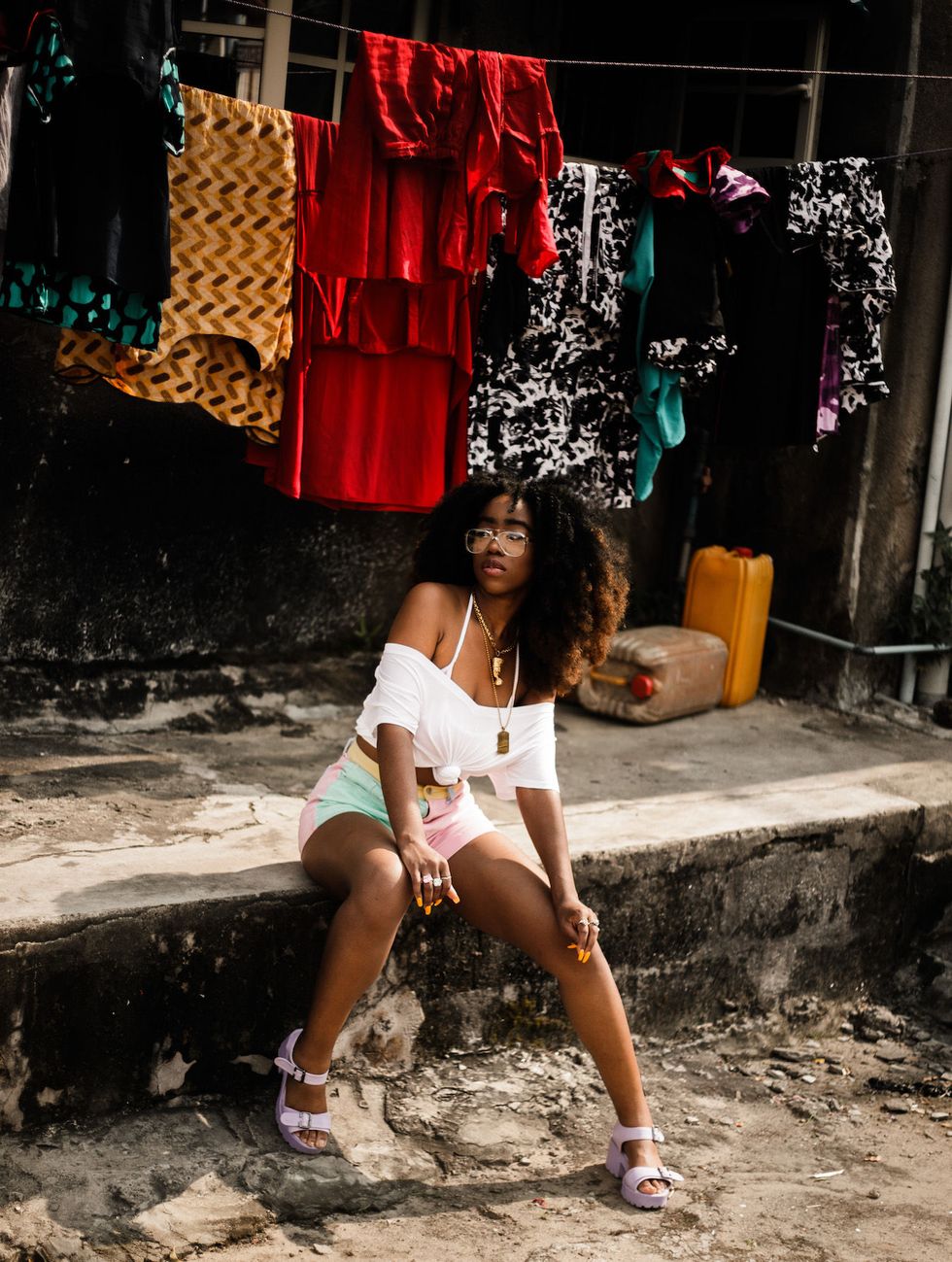 Writer and motivational speaker Chidera Eggerue speaks on her successful platform, The Sunflower and how to find strength as a black woman.

In a world where messages tell women that being “unique" means being like everyone else, it can be difficult to truly embrace and love oneself. However, there are women like Chidera Eggerue, also known as The Slumflower, who live on their own accord and remind other women to do the same.

As a black woman, finding young authors who tell stories that you can connect with can be difficult, however that changed when I found Eggerue. Her tweets like, “They don't tell you that the REAL glo-up begins with mentally de-shackling yourself from what once held power over you," reminded me of the value of self-exploration and how it is key in success. For me, it was unique to see a young Nigerian woman be vulnerable and use her personal experiences as a canvas to create a brand and message. This inspired me and reminded me that's storytelling was a gift that should be used to uplift others.

Her style, bubbly personality and words attracted people of all backgrounds and publications like Vogue, Galore, i-D and CNN. As a blogger, writer, speaker and creative director for vacation rental company Innclusive, she uses her platform to connect with people on a human level. Although she has a very clear target audience, Eggerue's message transcends race and gender and is received by thousands of her fans who visit her page daily to get their dose of inspiration from The Slumflower.

Eggerue is developing a new hustle without a clear formula nor path. She has created a brand so strong that companies now reach out to her to curate unique experiences that attract like minded audiences. It is clear that she has made a career out of her passion.

I got a chance to chat with Eggerue and talk about black womanhood, growing up in a Nigerian household and some of her favorite books.

Amarchi Nwosu for OkayAfrica: You started out as a style blogger, why did you make the transition into writing and motivational speaking?

Chidera Eggerue: My content revolves around female empowerment and social issues and this made me realize that if I'm connecting with women online, there are also women offline who will be able to relate to me. Writing is something I have always been interested in but I never felt like a 'writer' because I didn't study English at graduate level. This may sound like a silly reason but there are a lot of people who feel like they can't do something without formal accreditations.

I decided that as long as I enjoy what I write, I am a writer for an audience of one. What surprised me, was when that audience of one became an audience of 100, which multiplied into 1,000 and before I knew it, has now exceeded 10,000! I've realized that the situations I've found myself in are situations a lot of people are currently going through and I feel like if I had the clarity I have now then, that I have now, my life would have made sense earlier, but everything happens the way it's meant to. I want to be the voice I wish I had, for someone else.

You also work as the creative director for Innclusive, can you tell me a little more about the work you do there and the brand initiative?

When Innclusive's founder Rohan Gilkes experienced first-hand racism on Airbnb, he decided he'd finally had enough of hosts declining his accommodation requests whilst accepting the exact requests from his white counterparts. Innclusive was born out of this frustration six months ago and has quickly grown to be the vacation rental company that allows people of color to 'be yourself wherever you go.'

My job as Innclusive's creative director is to control the social media accounts and curate mini social media campaigns, which include video and photo content to convey the Innclusive ethos and lifestyle of being a free-spirited traveller. Being a young person who is incredibly social media-savvy, I am able to implement modern and innovative approaches to utilizing not only social media, but also contemporary ways of delivering content e.g. via mini travel vlogs presented by me as a personality. Through closely monitoring our social media engagement, this allows me to understand what users and potential customers prefer to see based on the relationship between the amount of 'shares' and the amount of sign-ups we receive.

What is the most powerful quote you have ever heard?

“Silence can never be misquoted." —Mum

In your writing, you often reference black womanhood, why is this so important for you to address?

Do you feel like social media has been an instrumental part in exposing the complexity of black womanhood today?

Definitely! Colorism is one thing I know social media has highlighted. From the fetishization of 'light-skinned babies,' to the prevalence of bouncy, curly 3C hair textures in black hair product campaigns goes to show that there's only one shade of black a woman should be in order to be digestible and desirable. I see so many natural hair movements which I strongly applaud but this narrative is always being led by the same type of woman: a light-skinned lady with bouncy, fluffy curls. What about the dark-skinned women with tight, coarse 4C hair? As a dark-skinned woman with 4C hair, I still feel like women who look like me are only desirable when we are oiled up and naked with that 'melanin glow.' But don't get me wrong: I appreciate the newfound love of melanin but to me, it heavily comes across as a convenient fetish on social media.

To you, what makes a strong a woman?

Are there ways in which your Nigerian upbringing has inspired your craft?

My mother always taught me: never believe anybody is better than you. You are who you need to be and nobody can replace you. She was a pageant queen and has always been an influence to all her mates in terms of her style, makeup and demeanor. It was from her, that I learnt how to be confident and how to navigate this male-dominated world.

Who are some of your favorite African artists or authors right now?

Chimamanda is my ultimate number ONE. She was the reason I introduced feminism to my household—probably the hardest thing I've had to do in my life. Trying to educate a Nigerian parent on why Nigerian culture is partially flawed and is only in the favor of men, is like trying to prove that water is not wet. How on earth do you teach your mother that the way she was raised is 'wrong' without offending her? It's a battle but it's worth it. We still argue over it. She still uses the 'because you're a girl' answer but I think she's slowly learning. We are never too old to be better.

I also adore the work of photographer Manny Jefferson who I shot with when I visited Nigeria last summer. His work shows how multi-faceted Nigeria is as a beautiful nation. With a touch of vulnerability and a heavy awareness of self, his work screams 'I will not be defined by my surroundings'.

Are there any self-help books that changed your life?

Alex Elle'sWords From A Wanderer was the first self-help book I ever came across when I was 20 and it genuinely saved me from my downward spiral. I was going through a very rough period of feeling like I was allowing other people to tell me who I was. I was lost and confused but as someone who has lived through damage and has grown through it, Alex reminds me constantly that it's okay stumble again and again until you finally get it right.

If you could give your younger self any piece of advice, what would it be?

Despite the obstacles you face as a black woman, what keeps you going?

Knowing that as a black woman, I am and always will be, the source of the sauce. I will always be in demand for one reason or another. I will always be able to rise through anything above all the institutional obstacles set in my way. White women wanna be us so bad. But only when it's convenient for them. It's okay to want darker skin, thicker hair, fuller lips and wider hips but taking on the burden of constantly having to prove yourself and defend your right to exist? Of course not. I know that's really wild to say but there's an elephant in the room and the elephant is getting bigger as the room gets smaller. It's damaging to constantly pander to and coddle white feelings. The truth needs to be told. The conversation needs to be had. I'm willing to start it.

What's next for The Slumflower?

You'll be seeing me on TV, ad campaigns and on the shelves of your favorite bookstores soon. I'm writing a very important book.