These 10 Queer Couples Embody the Beauty of Black Love 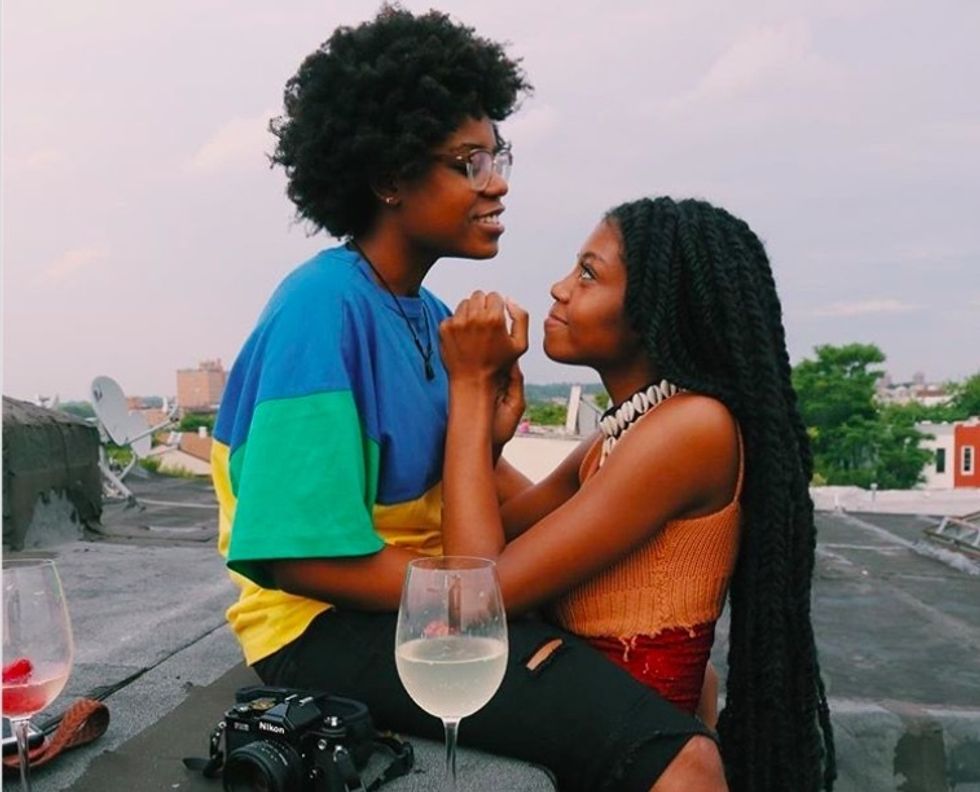 Loving a black person while being queer is one of the most radical and beautiful forms of love. Let's celebrate it.

Being black and LGBTQIA means—more often than not—to be nearly invisible in mainstream media, as it seems that black people can only be straight, and only white people can be queer. And the very few times you see black LGBTQIA folks represented fictionally or in real life, their partners tend to be white (a few exceptions remain, one of them being the TV show Noah's Arc), as if two queer black folks are incapable of being in a normal, loving relationship.

Even among the black queer celebrities that are out, most of them have white partners.

In an era where being in an interracial relationship seems to be a trend, an interesting badge of honor, black love, as a concept, has had a resurgence recently on social media. On top of that, an OWN documentary was recently broadcasted, featuring black people proudly loving one another. Alas, most of these couples were straight. So despite what we may or may not have seen, black queer couples do exist and it's time they get their own limelight. An LGTQIA relationship in a society that tries very hard to "straighten" people, is one of the most radical forms of self-affirmation.

Similarly, loving a black person while being queer is one of the most radical and beautiful forms of love. Let's celebrate it.

Precious Davis is an trans award winning diversity advocate, public speaker. She met Myles, a transgender outreach coordinator at a LGBT community center. They both are heavily involved in their LGBTQIA communities and Myles identifies as transmaculine. As she recalls for the Chicago Tribune:

"It wasn't until I met Myles that someone would love every part of me, my body, my soul, my spirit, the things that I stand for, my outlook on the world, how I wake up in the morning with no makeup and my hair matted on one side," she said. "That's how you know you've found the right person."

Lena Waithe is a Emmy winning writer, producer and actress. She has written, among others, the webseries Hello Cupid, a few episodes of Master of None, including the Thanksgiving episode and the Tv show The Chi. She also co-produced Dear White people and will be seen soon in the new Steven Spielberg movie, "Ready Player One"

She is currently dating Alana Mayo, head of production at Outlier Society, a production company created by Michael B. Jordan.

Talking to the Daily Beastabout her partner, she says:

"She's my partner, my life partner, my better half, she's everything. 'Wife' would only be the tip of the iceberg. She's phenomenal. She's a big champion of interesting writers with unique stories to tell," said Waithe. "She's one of the soldiers on the front line making sure writers like myself not only have a voice, but that folks get out of the way to let writers' voices soar."

Alison Graham and her partner

Alison Graham is a fashion influencer whose dapper, androgynous style has been featured on DapperQ and Buzzfeed. She runs the Instagram page She Does Him where she posts her gorgeous travel experience and street style.

Christin Brown is an award winning hairstylist whose clients include Yara Shahidi and Tamera Mowry. She has been married to her wife Ashe, the owner of the brand Pura Luna Apothecary, for 8 years. They welcomed their first child last year.

Kyemah McEntyre is a fashion designer and student. In 2015, her African-inspired prom dress became viral and was featured in Cosmopolitain, Tern Vogue and BET. She recently launched her first collection at New York fashion week.

Her girlfriend Leesy is a photographer and artist.

Dre is an singer, make up guru and influencer. Him and Tae met in high school. They have been dating for the past three years and are the proud owner of a dog.

Rutina Wesley is an actress, known for starring in the TV shows True Blood, Hannibal and Queen Sugar. She is a recipient of an NAACP image award and a Satellite award. She was previously married to Jacob Fishel, an actor. She recently came out by announcing her engagement to Shonda, a New Orleans based chef in November 2017.

Dom and Nick love story sounds like a perfect fairytale: they met in high school and became friends. They eventually started dating and became lawyers together. They got married in 2017.

As they told Buzzfeed:

"Dominic and I feel lucky to have found love at such a young age. However, falling in love with another black man was scary in ways neither of us could have ever imagined. It forced us to face the very real resistance from society for being not only homosexuals but black men as well. We had to confront the stereotypes of being largely defined as uneducated, disloyal, untrustworthy, and unreliable individuals. But together we chose to rise above those prejudices and rewrite our own story- one of inspiration. We hope to encourage other black and brown men and boys everywhere to be true to who they are. And when they find love in each other's eyes, to know that their love is just as strong and beautiful as anyone else's.

Ari Fitz and her partner

Ari Fitz is a model, filmmaker and influencer, famous for her dapper style. She has collaborated with the photographer Christina Ting to portray black queer intimacy in a series of pictures, starting with her own relationship with her partner. The goal: to show that black queer love and intimacy is a beautiful thing that deserves to be praised.

As she writes: "when there's a consistent erasure of your story from popular culture, you start to think your story, your love, your fears, your existence don't matter. Which is why i'm tired of white cis straight women in romantic comedies teaching me how to love. No shade Sarah, I've just worn your shoes and seen through your lens my whole life. So, here's mine. Here's how I love."

Brittney is an American professional basketball player. She received the Best Female ESPY Award in 2012 and has been playing for the Phoenix Mercury since 2013. She is a WNBA champion and has won the WNBA All-star four times. She came out as a lesbian in 2013, and married fellow WNBA player Glory Johnson in 2015.

Their union, however, was plagued with fights and controversies, and they divorced in 2016. SInce then, Griner has found love again and is currently dating Cherelle Tanae, an educator.

As she says in her book Brittney Griner: In my Skin:

"Being true to myself has often been at odds with my desire to please others. I've spent years trying so hard to be the version of myself that would make the most people happy. Over time, though, I've come to realize that no matter how much I compromise, some people will never understand me. And accepting this truth has given me a new level of comfort and freedom."