Bombino, the First Nigerien Artist to Be Nominated For a Grammy 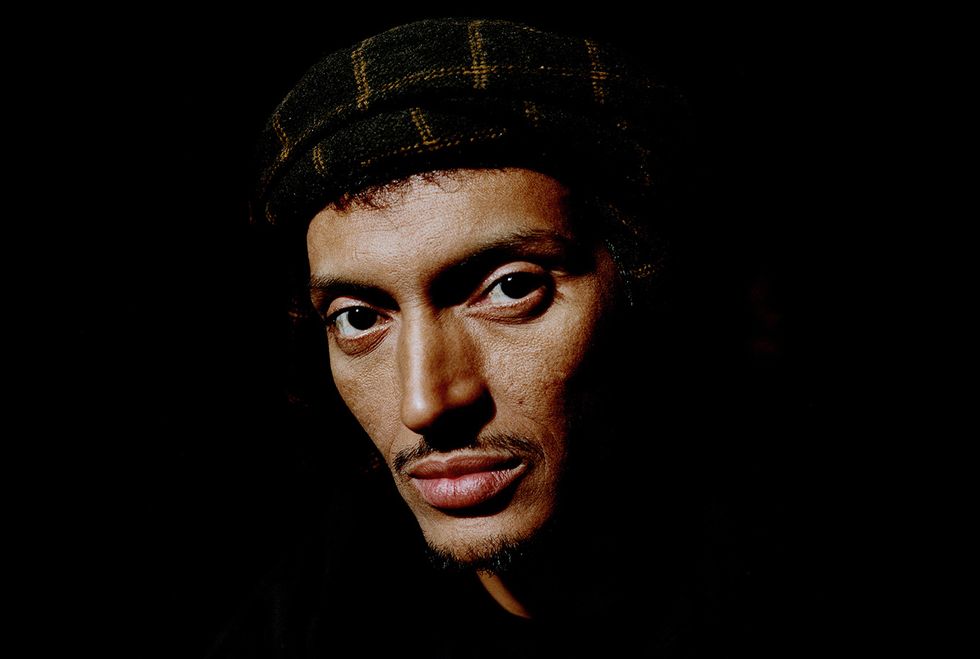 The electrifying musician talks to OkayAfrica about wielding the Tuareg weapon of peace: a guitar.

Omara "Bombino" Moctar, 38, is the Nigerien guitarist who has recently been nominated for a grammy.

His electrifying, acoustic sound and Tamasheq lyrics that touch on his Tuareg heritage and connection with the desert have become a hit. His music is boundless. It is comprised of traditional Berber sounds, the blues, rock & roll and reggae. What is just as unique as the above is his story.

His people, the Tuareg, descendants of the Berbers of North Africa have long been nomads, traders and warriors within the Sahara Desert.

In his early years, Bombino grew up in an encampment in Agadez with his seventeen brothers and sisters and rebelliously refused to go to school. He would attend a French-Arabic school until the age of nine then leave and be taken in by his grandmother, who would instill in him Tuareg moral code.

In 1984, when a drought decimated their livestock and forced the Tuareg of Niger and Mali to migrate to Algeria and Libya. They fought against governments that failed to notice them. Artists pushed the agenda of the rebellion through music. Tuareg musicians sang songs that affirmed the importance of heritage and the upholding of rights. It was from this school of thought that Bombino's love of music came to be.

In 1990, when the Tuareg started their first rebellion, they were declared enemies of state and exiled. Bombino's family fled to Algeria. While there, he was visited by relatives with guitars they left behind. Curious, Bombino took a guitar and began to strum.

When tensions cooled, Bombino and his family would return to Agadez. Bombino would be gifted a guitar and even join the Tuareg political party. Under the tutelage of the party's guitarist, a young and small Bombino would make quite the name for himself.

Bombino would grow as a musician and perform a number of places to the dismay of his father. He would even befriend other musicians like him on journeys to Algeria and Libya. His guitar was never too far away. While tending to animals as a shepherd, Bombino practiced. He studied the videos of Jimi Hendrix in an effort to perfect his craft. Demand for him grew.

He would eventually record his first album and become highly requested on Agadez radio.

In 2007, a second Tuareg rebellion took the lives of more civilians and livestock, so Bombino fled to Burkina Faso. While there, the man would meet filmmaker Ron Wyman who would both film him for a documentary and take him to Cambridge to record an album. This album would be the beginning of international acclaim.

When the Tuaregs stopped fighting, Bombino performed and celebrated in Agadez, at a concert for peace before a large crowd.

Bombino would tour the world and continue to record. His album, Nomad (2013) would debut at #1 on the Billboard World Music album chart and iTunes World chart. His next album Azel (2015) would feature his new genre, 'Tuarreggae,' a mix of Tuareg blues, reggae and rock. His most recent album, Deran (2018) was recorded in Morocco. It built on the artist's need to make something wholly african and be as expressive as possible. It, evidently, topped charts and landed him features in the New York Times, Noisey and the Guardian.

Today, Bombino travels far and wide speaking about his culture and the importance of peace and education. He does so wielding a guitar.

We sat down with him to discuss his music and how he's pushing the Tuareg culture forward.

Okayafrica: What brought on your love of music?

Bombino: The love comes from the desert. It is where I was born, in the Sahel by the Sahara. My community, the Tuareg, live in Niger, Mali, Libya, Algeria and Burkina Faso.

Everything started in my youth with a guitar. In 1990, we had traveled to Algeria. My cousins came to visit me with a guitar they were playing. I was very young. I recall pretending to go to school but hiding in a room alone to play guitar. That was the start.

My uncle was a painter who often traveled to Europe for work. When returning, he would bring back instruments like pianos, guitars and accordions. He gifted me my first guitar.

What is the official number of albums in your body of work?

Six. There are albums from '98, '04 and '07 that are only known within Niger. The last three are known around the globe.

You have been dubbed an emblem of the new generation of Tuareg, a voice of the Sahara and Sahel and a fuser of traditional Berber sounds with rock and roll. You also often shout for peace. What does it mean to you to be Tuareg and to be a Tuareg musician?

Music, for me, first and foremost, was an arm for peace. In the region where we {the Tuareg} were from, we dealt with multiple hardships. The guitar became a symbol of peace; many youth fell in love with the instrument.

Music has no borders, when it comes to mixing different rhythms. In the desert, we play the sounds of rock and roll, blues or even reggae. It is the best place to listen to music and to learn how to make music.

"Music, for me, first and foremost, was an arm for peace. In the region where we {the Tuareg} were from, we dealt with multiple hardships. The guitar became a symbol of peace; many youth fell in love with the instrument."

Why is the desert the best place to listen to and learn music?

It's a place that offers the most calm and the most solitude in the whole wide world. At night, the stars give you the impression they are right next to you. The view you have is vast. When playing a guitar, you can put the volume as loud as you want.

Over the course of your life, being Tuareg has exposed you to a variety of trials and tribulations from exiles to rebellions to the loss of friends etc. Can you talk to me about this?

I've been lucky. I was very young during the rebellion. I had the chance to play my guitar instead of taking up arms. I was concentrated on my music. I was able to become one of the first Tuareg artists to be liked by not only my own but other Africans and people worldwide.

This gives us courage and encourages us to continue what we are doing. We want to better this arm of peace, this arm that helps us speak of the importance of peace.

Today, the Tuareg have made exemplary strides in Niger. They have become ministers and army generals . Perhaps, one day, we will be able to better the lives of our families with these strides.

We've touched on the importance of peace for you but what other themes do you cover?

You've been compared to the likes of Jimi Hendrix, Carlos Santana, Neil Young and Jerry Garcia. How does that feel?

It fills me with immense joy. I have no words. If they compare you to artists like that, I have no words to explain that. I never thought they would compare me to such impactful guitarists who have explored and been a part of the history of the world. It fills us with courage in what we have been doing. It motivates us to keep pushing forward.

Your fourth album, Agadez (2011), came from a time where you were living in exile in Burkina Faso. Filmmaker Ron Wyman tracked you down featured you in a documentary and moved you to Cambridge, Massachusetts to record.

When Ron Wyman found us in Ouagadougou, he had the idea of making a documentary on the Tuareg rebellion centered around the Tuareg community. At the same time, he highlighted our story as artists. The documentary started in Ouaga and followed us from Niamey to Agadez. When that was done, he proposed we do an album in Boston. We recorded a few weeks in Boston and finished recording in Agadez.

And that's the start of immense fame?!

(Laughs) Yes, things went from there.

For your fifth album, Azel (2015), you introduced the genre "Tuareggae", what was the motivation behind this innovation?

As I mentioned, we love blending traditional rhythms and modern ones. In the desert, the youth and even the old listen to a lot of reggae from the likes of Bob Marley and other Jamaican artists. We celebrate and listen to multiple genres doing so. I asked myself 'Why not try to mix it in and see what happens'. That's real music. Real music has no borders. It attempts to embrace other cultures.

What collaborations make you the most happy?

There are many. Namely, Dan Auerbach of the Black Keys and the Rolling Stones really helped us.

Deran (2018) was released on May 18 and rapidly hit #1 on the iTunes World Charts and has recently been nominated for a Grammy. It is an album recorded fully at home. How does it feel to reach this summit?

It fills us with pride. We weren't expecting this. We got back from a long tour and our manager called to tell us this. We screamed. I am filled with immense joy. I hope we win.

Bombino's Grammy-nominated album Deran is available now. Catch him on his US-Canada tour dates listed below.