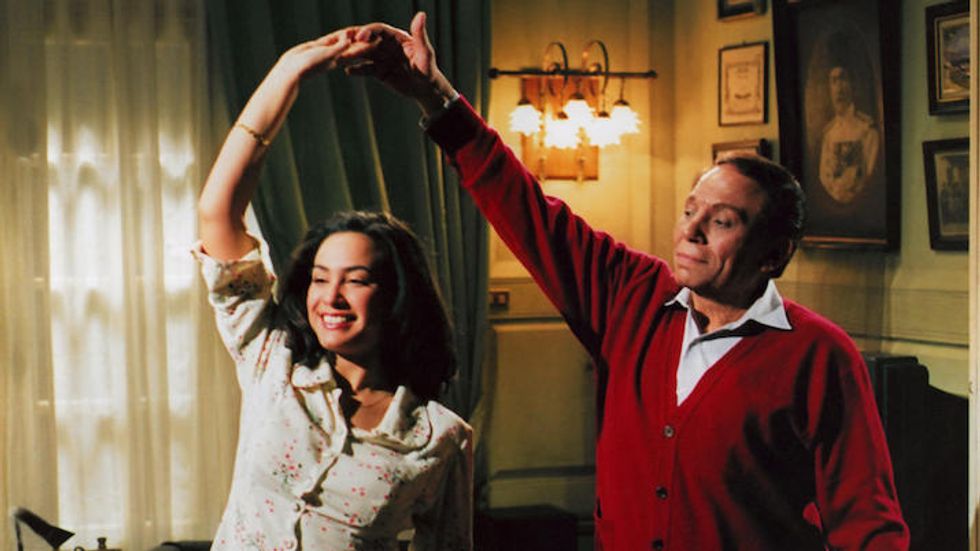 The history of Egyptian cinema goes back to the year 1896, when, on November 5th, spectators attended the very first film screening in Alexandria. Twelve days later, fifteen motion pictures of landscapes were screened at Cairo’s Hamam Schneider Hall. The following year, Egypt’s first film theatre, Lumière Cinématographe, opened in Alexandria and then in Cairo. The date generally considered to be the official beginning of Egyptian cinema, though, is March 10, 1896, when Monsieur Promio, envoy of Lumière Company in France, started shooting the first films of landscapes in Egypt.

While a limited number of silent films were made in Egypt from 1896 (1927's Layla is notable for being the first full-length feature), Cairo's film industry became a regional force with the coming of sound. Between 1930 and 1936, various small studios produced at least 44 feature films. In 1936, Studio Misr, financed by industrialist Talaat Harb, emerged as the Egyptian equivalent of Hollywood's major studios, a role the company retained for three decades.

In 1917, director Mohamed Karim established the first production company in Alexandria. The company produced two films: Dead Flowers and Honor the Bedouin, which were shown in the city of Alexandria in early 1918.

Since then, more than 4000 films have been produced in Egypt, three quarters of the total production of Arab films. Egyptian cinema became the leading industry in the Middle East, with the 1940s and 1950s generally considered the golden age of Egyptian cinema. As in the West, films responded to the popular imagination, with most falling into predictable genres (happy endings being the norm), and a number of actors making careers out type-cast parts.

Political changes in Egypt following the 1952 overthrow of King Farouk initially had little effect on Egyptian cinema. The Nasser regime sought control over the industry only after turning to socialism in 1961. By 1966, the country’s industry had been nationalized. By the 1970s, Egyptian films were striking a balance between politics and entertainment.

Since the 1990s, Egyptian cinema has gone in two separate directions. Smaller art films like Radwan al-Kashef's Violet Flowers (1992) and Osama Fawzy's Devil’s Paradise (1999) have attracted some international attention but sparse attendance at home. A few productions, such as 2003's Sleepless Nights, intertwined stories of four bourgeois couples, and 2006's The Yacoubian Building, bridged this divide through their combination of high artistic quality and popular appeal.

In 2006, the film Free Times was released. A social commentary on the decline of Egyptian youth, the film was produced on a low-budget and low production value. The film, however, was a success. Its controversial subject matter, namely, Egyptian society’s sexual under, was seen as confirmation that the industry was finally beginning to take risks.

The 2011 revolution affected Egypt’s film production in both quantity and quality. The number of feature films destined for theatrical release decreased due to the country’s economic status. Additionally, months of curfew meant fewer theatrical screening per day, and thus a decline in ticket sales. As for the quality, most of the feature films were commercial and content-free, which made the majority of film critics and viewers complain. Major film stars went to make soaps on Egyptian TV channels which gave the space to less popular actor to top-bill smaller B-movie productions. At the same time, another group of independently-produced films have been screening at international film festivals, some even taking home awards and rave reviews, like Ahmed Abdallah's Rags and Tatters (2013), Aytin Amin's Villa 69 (2013), and Mohamed Khan's Factory Girl (2014).

In the following pages, Sherif Awad, a​ ​film critic and curator based in Cairo, highlights ten of the best Egyptian films of all time (listed in chronological order).

Next Page
From Your Site Articles
Popular
Style
afcon 2022