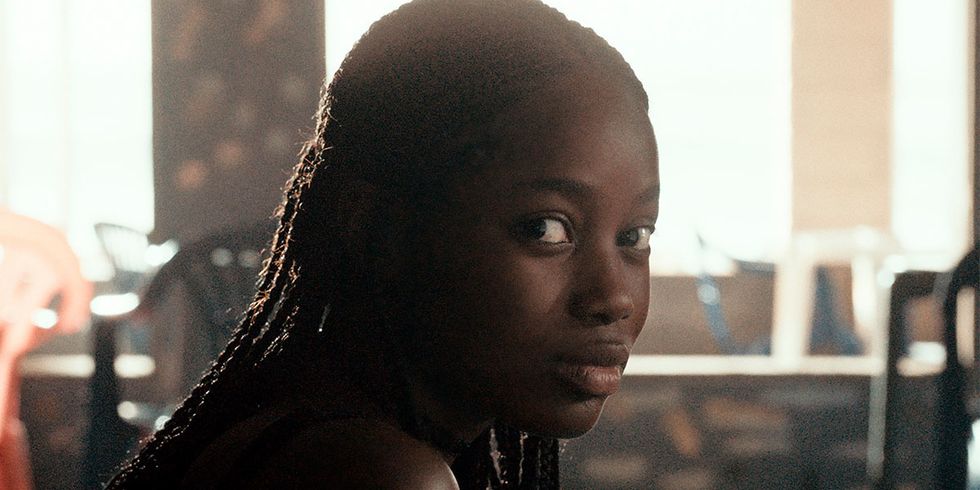 We caught up with the celebrated director at the Toronto International Film Festival to talk about her new film, Atlantics

It's been a good year for French-Senegalese director Mati Diop and her film Atlantics.

The movie got its North American premier at the Toronto International Film Festival (TIFF) this month after wowing critics and audiences at Cannes, where it won the prestigious Grand Prix. Diop was the first Black woman to successfully submit a film in the Cannes competition, and naturally the first to win any award at the iconic festival.

In Toronto, the Paris-born director was also honored with the inaugural Mary Pickford Award for Outstanding Female Talent, presented at the TIFF Tribute Gala on September 9. The award is named after Mary Pickford, a Toronto native who went on to conquer Hollywood in the early days of the industry as an actor and producer. Co-founder of United Artists, she was the highest paid woman in Hollywood in her day.

Mati Diop, actor and director, was born in Paris into a prominent Senegalese family, the daughter of noted musician Wasis Diop, and niece of well known filmmaker Djibril Diop Mambéty. As a director, she has several short films under her belt, including Atlantiques in 2009. Her short films Big in Vietnam and A Thousand Suns screened at TIFF in 2012 and 2013 respectively. Atlantics is Diop's first feature, which she directed as well as co-writing the screenplay with Olivier Demangel.

It's in the story of the first Atlantiques – the short – that the new film came to be. "The two films are both connected and not connected," Diop tells OkayAfrica. The short Atlantiques was self produced, and shot on video on a shoestring budget, she explains. Diop was moved by the constant stream of reports, between 2000 and 2010, of young Senegalese taking to small wooden boats and braving the ocean waters in a bid to reach Spain and better opportunities. As she notes, the media tended to treat the phenomenon as largely an abstract issue, one that had to do with economic forces. Diop wanted to tell the story of the real people in that situation.

"I felt that my cinema should be put at the service of their voices," she says. "I wanted to understand." It's part of what motivated Diop to get into film in the first place. While the short was shot documentary-style, she worked the story as fiction. The actor featured in the short had actually made an Atlantic crossing, but was subsequently turned back by Spanish authorities. The way he spoke about the experience connected with Diop; in particular, his determination to try the perilous journey once more. "I am here, but not here," he told her. "Serigne felt it was here [in Senegal] he would lose his life," Diop says. She wanted to understand what drove so many young men to risk their lives. "He felt that his life was vulnerable in Senegal." The actor's words took on even more resonance when he died, while still in Senegal, before he could try again. Diop says he had gone to a hospital after falling ill, but the staff were on strike. After his death, it left her with mixed feelings. "I wondered if I had the right to continue."

Diop was left with the poignant memory, and a haunting impression. "When you leave, it means you are already dead," she says. After filming the short, she attended Serigne's funeral, and filmed his mother and sister—the women left behind who would become the focus of the feature film treatment. Diop says that the character of Ada, the protagonist of the new movie, is based in large part on the sister, who, in the short film, does not speak any lines.

In Atlantics, Ada is 17 years old, in love with Souleiman, but her parents have already arranged a very practical marriage with another—and much wealthier—man. On the eve of her wedding, odd things begin to happen, and Ada learn that Souleiman and his friends have left Dakar in a boat, hoping to reach Spain. Ada and her BFFs anxiously await any word from them, as the mysterious happenings keep piling up.

"The beauty of women comes through marriage," a cleric tells one mother. Ada's story embodies the life of a young West African woman—torn between traditional forces in both her family and society, and the friends who wear Western dress and don't bother with the old ways. The wealthy family she has married into owns a large construction company, the one that didn't pay its workers for months, leading the young workers to try their luck in Spain. She loves Souleiman, but she also needs to find her own path.

Mama Sané plays Ada, the solid heart of the film, as a tangle of emotions and repressed desires. She veers from defiant when dealing with the police detective sent to investigate the strange occurrences, to a wordless expression of longing with the kind of intensity only a teenager can muster.

Diop's directorial vision turns Dakar into a place of both surreal magic and harsh reality. The film immerses the audience in the city's sounds, from the goats bleating outside a window while Ada and her friends talk, to voices in the next room, with the eternal heaving of waves against the shore as a recurring refrain. The original music by Fatima Al Qadiri adds to the effect.

Cinematographer Claire Mathon has shot the film with a poetic eye. There are many images of the shifting surface of the sea, with the open sky and sun above it, each different from the last. The streets of Dakar at night take on an otherworldly edge, framed in palm trees against the artificial lights. The building the young men have been working on is futuristic in design, all glass and steel, and the company owner's neutral modern mansion contrasts with the broken rubble on the streets, from slick sports cars to horse drawn carts. It adds to the sense of the surreal.

Atlantics was acquired by Netflix after Cannes, and is intended for worldwide release by the streaming service, (with the exception of China, Russia, Benelux, Switzerland, and France.) As part of its new policy, Netflix, which became an official member of the MPAA (Motion Picture Association of America,) earlier this year, will be giving the flick a "theater-first" release, opening in selected theaters on November 15, with streaming available from November 29 in North America.