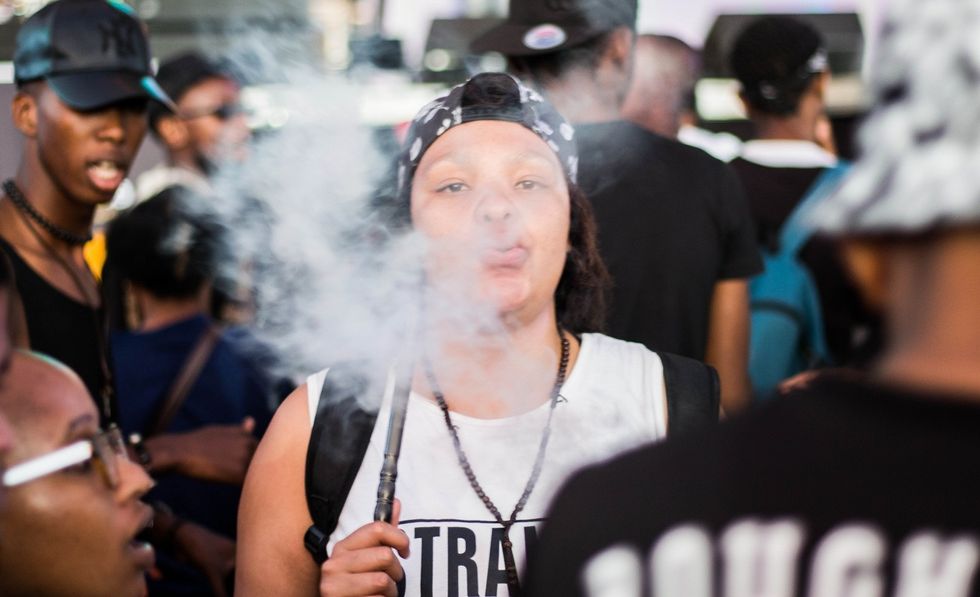 4/20 Special: 11 South African songs to listen to while blunting.

You can't separate hip-hop and weed. Dr. Dre's debut album The Chronic was named after the herb and the likes of Snoop Dogg, Wiz Khalifa and Quasimoto pretty much made careers off rapping about weed.

The tradition is alive wherever hip-hop exists. In South Africa, weed has been rapped about just as much as the aforementioned artists have. And according to Lord Quas on "America's Most Blunted" from the album Madvillainy, listening to music under the influence of weed makes it sound better.

"Listening to music while stoned is a whole new world. Most cannabis consumers report it second only to sex. And grass will change your musical habits, for the better."

In light of 4/20, we list some South African hip-hop songs, both old and new, about weed. If you're a smoker, these songs could come in handy for you today.

​"Buddha" is the 11th song on Durban-born rapper Black Moss' socially and politically conscious album Public Interest Post '94. "Buddha" was meant as an intermission from all the hard subject matter, which can be depressing. The rapper deploys the triplet flow and lets us in on how he indulges on Buddha, from taking out the stems to recording some of his songs high.

Nothing worse than your rolling partner going M.I.A, right? We wouldn't necessarily know, but to Saudi it seems to be a major concern. "There She Go" is about just that—a lady friend who Saudi smokes with disappearing and smoking with lames Saudi doesn't fuck with.

On his breakout hit, Emtee invited all of us to "krapa fasa, baba, let's start rolling up the jets." "Roll Up" is easy on the ear with nothing much to dissect. Depending on how you are wired, that could be the best song to roll up to. If not, then the tempo will surely be in sync with your mood.

"Empty Highways" is metaphorical in that Shane Eagle talks about rolling with you on an empty highway, which could either mean a road trip or rolling some trees in an imaginary empty highway. The man raps, "I'm always smoked up, I hate taking pictures at malls," and gives it away. The song is mellow and sees Shane at his most introspective, which is the most fitting vibe to get high to

From an EP titled Clouds, came a song that was about having your head in the clouds. It's the ethereal pads and the nonchalant delivery that make this the ultimate song to get high to (Flame was probably high when he recorded this). The man's relationship with weed is of a higher level—he talks of "rolling up a bag of weed in the morning/ Just so I can hear the angels calling me."

It's the woozy pads by the producer Arsenic that set the mood for "3rd Ave. Trippin'." YoungstaCPT introduces us to different flavors—Swazi, skunk, cheese—with the flair we've grown to expect from him. He raps, "Paper, scissor and rollers are the components/ Bone Thugs, Bob Marley are the composers/ Listening to reggae while I'm smoking, I feel I'm zoning," painting a clear picture of his session.

​Mothipa, in this stone-cold South African hip-hop classic, personalized the herb. The MC speaks of Mary Jane as a woman, and the song is littered with impressive wordplay. "Ode To Mary Jane" is catchy without being repetitive—it's the familiarity of the Soul Brothers sample. If you hold your weed as dear to your heart as you would a woman you love, this is the best song to blaze to.

"Flavors" is not just about weed, but the way Zoocci Coke Dope sings so passionately about the herb on the hook, getting high to "Flavors" doesn't sound like such a bad idea. Imagine hearing "A lot of smoke in my eyes/ Man, I'm floating on a kush cloud" or "I'm talking all night bottle poppin', nigga, where are you?/ Roll it up and light it up until my face is blue" while floating on a kush cloud and lighting it up until your face is blue. You are welcome.

Cape Town-based rapper Master Kiii is a stoner and an otaku. So, as he says on the hook, all he does is blaze and watch some anime. The boom bap production and his smooth flow should make for a perfect soundtrack to... well, blaze and watch anime.

AKA sings on the hook that he is "high as heaven." That seems like the ultimate high. The beat to "Heaven" is cloudy, it does indeed feel like heaven. Also, imagine listening to Maggz's vicious verse while high as heaven.

Word is Tha Hymphatic Thabs' music is best experienced while high. Well with lines like, "I'd rather have proper ganja than propaganda," that theory is far from conspiracy. The man's wordplay is mean, and your brain could do with some assistance trying to understand his rhymes fully.

"Nigga, I got problems, what you think I'm smoking for?" sings Nasty C on the opening line for "Problems." If, just like Nasty C, you "hit the loud like once a month and leave my conscious spotless," "Problems" is the perfect song for you. Maybe your problems are different to the rapper's, but hey, problems are problems. And Nasty C has figured out how to deal with them.