The Best African Memes of 2018 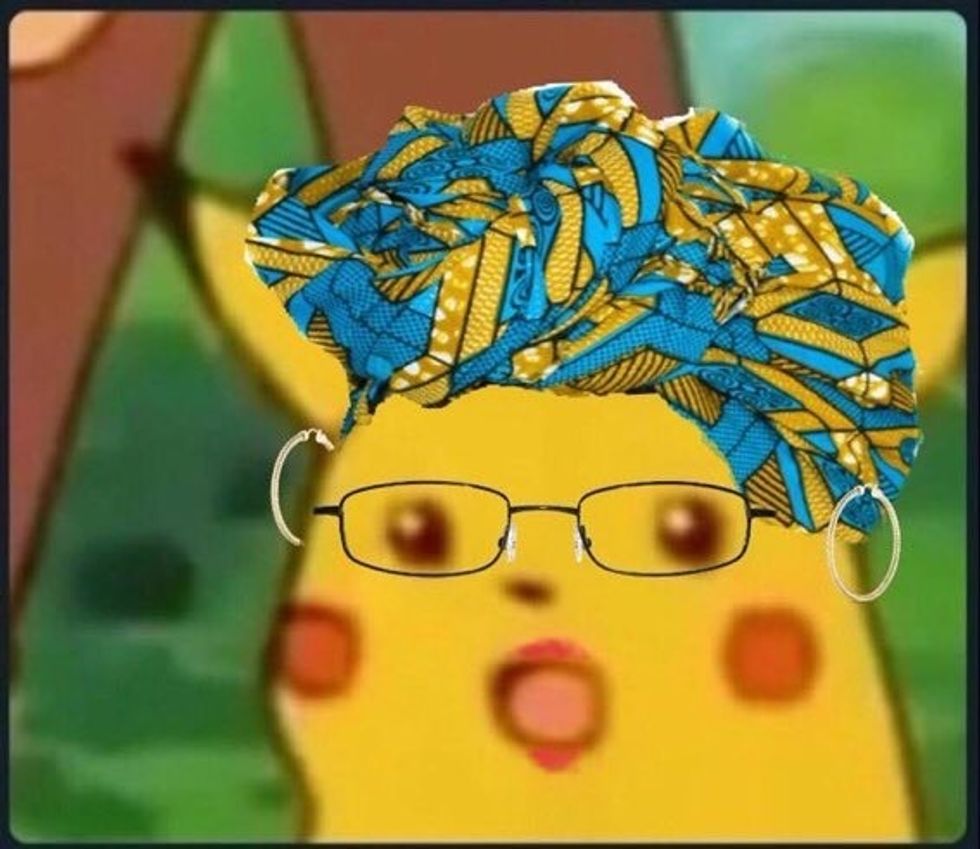 Meme culture has become a mainstay on these internet streets. It's essentially an alternate form of communicating, of commentary and of simple laughter. 2018 had its fair share of highs and lows, and young Africans continue to utilize memes to celebrate or to cope with the nonsense.

Black Panther took the world by storm this year (can you believe the film premiered in February?). The jokes soon followed the criticisms and commentary that rolled through the internet after folks screened the film. What had us rolling were the memes referencing the film using classic Nollywood clips, like the one above.

The diaspora has had its fair share of comedians go viral with their hilarious skits over the years. Some of the OG's include Nigerian-British jokester Adot the Comedian. Adot has produced a bunch of content but none of them are as funny as his 2014 web series, 'Adots Apprentice'—a parody of Donald Trump's reality competition show, 'The Apprentice'—which is where the meme above come from.

I shaku on the beat as well.

Miami rapper Kodak Black teamed up with Offset and Travis Scott on the track "ZEZE" and the #zezechallenge commenced, where aspiring rappers and sneakers freestyled over the catchy instrumental produced by D.A. Doman. One freestyle attempt from British influencer Lorraine, aka Loz, had diaspora Twitter in tears when she closed her flow off with the bar "I shaku on the beat as well"—which in turn boosted her virality value that even led to a fully-produced music video. Writer Shamira Ibrahim explains how young Africans took the phrase to troll everyone including their parents:

There is nothing more familiar than the feeling of innocuously sharing something light-hearted with your parents, only to be hit with a lecture on why you are failing to focus on your priorities. Whether it be a video game or a shaku, being judicious about the leisurely content we share with our parents is a time-honored tradition of young adulthood.

I cannot believe my eyes.

South Sudanese singer Akon Makeer's 2012 patriotic song, "Star Flag I Love You, My Country I Love You," resurfaced on social media this year. Diaspora Twitter utilized snippets from her track to accompany life moments that are all too relatable, like the tweet above.

This deep cut has all the makings of a meme—green screen scenes, stationary camera shots, prom gowns and a cute kid. But in all seriousness, when you listen to the song in full, Makeer tells the story of what her people had to endure to receive their beloved flag—their independence. Can't be mad at that.

This clip might arguably be one of the top five African memes that had us rolling this year. Back in March we uncovered the meme's origin story (read more about it here), which led us to the 2012 Ghanaian film 'Azonto Ghost.' The film is spoken in Twi, one of Ghana's main languages. We tapped director, producer and screenwriter Scilla Owusu to summarize and give context as to why this uncle is so hype:

"The woman is pregnant but she was too shy to tell her husband. The husband finally convinces her to tell him what news she was hiding from him," Owusu says. "She then lets him know she's 3 months pregnant. He's so happy and gives thanks to the Lord and is very relieved to hear the great news."

Well, next question. See ya!

Kenyan-Australian politician Lucy Gichuhi is all of us when trying to dodge sticky questions and life's blows in general. The clip of her abruptly ending a press conference this year landed in the hands of the internet to become a mainstay meme.

According to Buzzfeed News, Gichuhi heads the Australian Senate education committee and has been involved in politics since 2016. Before the viral response, she was asked about a thread the jobs and innovation minister Michaelia Cash unleashed to call out young women in opposition leader Bill Shorten's office in lieu of the rumors that were circulating in the midst of a sex scandal that was occurring in Australian politics.

No wonder Gichuhi wasn't trying to get caught up with that mess. Kenyan podcast host and all-around multi-hyphenate Ekua Musumba explains how Kenyans on Twitter ate up this meme for laughs:

#KOT, better knows as Kenyans on Twitter made this meme go viral because we all have an aunt who is as dramatic as this! From her facial expressions to her demeanor on camera, she was completely polite but highly uncomfortable. The "see-ya" at the end seals the deal! Hilarious!

Pikachu as an African Mom or Auntie. Enough said.

The shocked African Pikachu Auntie, or APA for short, is my favorite of all the viral Pikachu memes. It so perfectly encapsulates a reaction that is so ubiquitous—and can be in response to the most flagrant behavior down to the most innocuous. APA might be triggered because you responded "what??" when your name was called—at any age. Keep your wits about you.

@michael_modern After the sky bills and insta likes are deffered back to your own bank account https://t.co/oQMY7kNUbY
— bobby (@bobby) 1541021297.0

An African meme selection cannot be complete without Aki (Chinedu Ikedieze) and Paw Paw (Osita Iheme). The comedic duo have been working since the early 2000s and there is not a time you cannot see work from their films on the Twitter timeline.

When I'm through with you, you will see.

This clip has another origin story we had fun digging up on ever since Chance the Rapperwent out of his way to ask Twitter where it came from back in March.

The dramatic "evangelist" in this meme is Nigerian comedian and actor Ayo Ajewole, who started a drama/comedy ministry Alfa Sule with his Brother, Femi in 2002. This skit was initially released in 2009, where you'll see Ayo screaming "When I'm through with you, you will see" to a man as he tries to force him to join his church that only consists of two people—the pastor and his wife.

Read more about this clip here.

Last month, Konbini Nigeria uncovered the origin story behind a photo from iconic cartoon 'Dexter's Laboratory' that Nigerians used to make fun folks' pronunciations of words and phrases. Because English and other European languages brought by our former colonial rulers were imposed on our people by force, the willful misinterpretations of these said words are a hilarious form of resistance, and we can't get enough of it.

The #IdibalaChallenge is sure to lift your spirits any day.

Limpopo musician King Monada's catchy hit "Malwedhe" spread like wildfire across the continent due to the #IdibalaChallenge. According to Business Insider South Africa, the title of the song means 'sickness' in the Bolobedu dialect of the Sepedi language. Since the hook of the track translates to, 'I have an illness of fainting,' challenge participants took to literally fainting any and everywhere, like the Tanzanian wedding above.

Putting a gele on this popular Patrick meme had us cackling this year.

It's clear that this year was the year that the characters from 'Spongebob Squarepants' will forever be evergreen memes on social media. The 'Savage Patrick' meme made its hilarious rounds, but once someone added the necessary gele and complimentary necklace and turned Spongebob's bff into an African auntie, our stomachs commenced to hurt.

African Twitter proceeded to go down memory lane with what we went through as kids to how our parents go out of their way to bombard us with nonsense on WhatsApp (like the tweet above refers to). This remixed meme was yet another moment for us to revel in our shared experiences.

The rest of our favorites can be found here.

What we love the most about black folks on Twitter is their ability to take random current events and make it more relevant than any other media outlet or platform could ever attempt to. One moment that is a great example of that was the engagement announcement between Prince Harry and American actor Meghan Markle.

Of course we cared because of Meghan, she's out here shaking things up in the royal family as we speak. But since their engagement and wedding were black af as a result, the jokes and memes ensued like the one above.

Check out more of our favorite reactions here.