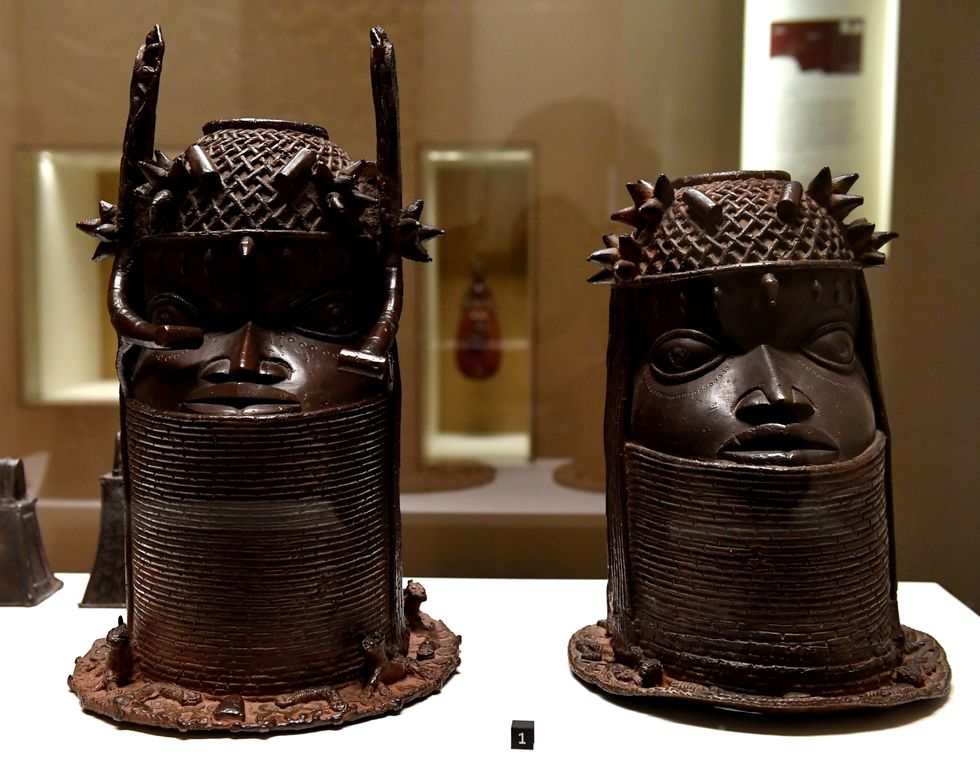 Heads of a Royal ancestor, arts of the Kingdom of Benin of the end of the 18th century are on display on May 18, 2018 at the Quai Branly Museum-Jacques Chirac in Paris. Benin is demanding restitution of its national treasures that had been taken from the former French colony Dahomey (current Benin) to France and currently are on display at Quai Branly, a museum featuring the indigenous art and cultures of Africa. (Photo by GERARD JULIEN/AFP/Getty Images)

What would it take to finally return the looted treasures of the African continent to their rightful owners? We spoke with curator Niama Safia Sandy about the future of African art repatriation.

Last November, France's President Emmanuel Macron oversaw the return of 26 artifacts that were stolen during France's colonial era back to their home in Benin. The move came after years of petitioning on the part of African governments and the commissioning of a report by the French leader that highlighted the need for full restitution to take place between European colonial powers and their former African colonies.

Macron's actions—while they could be read as performative measures, intended to serve France's economic interests on the continent by painting him in a positive light—was considered a constructive solution to the problem of art repatriation. It's a simple concept: a former colonial power admitted and apologized for stealing valuable cultural relics in the past, and then gave them back.

The process of art repatriation should be that simple, but in reality, it isn't. While efforts have been made to return these items to their rightful African owners—Germany recently returned a looted 15th century stone cross to Namibia—the majority of African cultural relics still live in museums far outside of the continent's borders. After all, France only returned 26 items, while the Quai Branly Museum in Paris alone houses 70,000 African objects, according to The New York Times. And apologies, when they do come, hardly suffice.

Case-by-case instances of restitution hardly seem like a solution to the larger issue. Even with some governments agreeing to return items, several major Western institutions have yet to fully commit, instead suggesting that items be handed back temporarily, as was the case in April of last year when London's Victoria and Albert Museum offered to return remains stolen from the mountain capital of Emperor Tewodros II back to Ethiopia on loan.

The pressure on European governments is only intensifying as more African countries demand that their historic treasures be returned, and public outcry—urging Western countries to simply give back what they stole—escalates.

As we've discovered, the process of giving things back isn't as simple as it should be, which raises questions about how to improve the process. As we go forward, what does an effective, foolproof process of art repatriation look like? Is this even possible to achieve? We reached out to Brooklyn-based cultural anthropologist, writer and curator of the upcoming Meditated Meditations exhibit at the Pratt Manhattan Gallery Niama Safia Sandy, to answer some of these questions. She spoke about current events in the movement towards full art repatriation, as well as the future of African art restitution. Read her responses below.

King Ghezo's throne of Abomey in Benin dating back to early 19th century is pictured, on June 18, 2018 at the Quai Branly Museum-Jacques Chirac in Paris. Photo by GERARD JULIEN/AFP/Getty Images

What do you think an ideal process for art repatriation would look like?

I can't speak to an "ideal process" because of the specific peculiarities of how each object was procured, but I will say that however the process happens, it should entail a full reckoning with and reconciliation of how the object made its way into a Western collection. Restitution should not just be about returning an object, but also supporting a discourse that acknowledges the role of colonization, power and the history of how it happened, while also building a system of equity such that global cultural heritage items can be shared by all humanity in a manner that does not prevent indigenous peoples of the world from having control over their cultural artifacts and assets. In an ideal world, a fund could be developed to support existing institutions, and alternately create new ones on the African Continent that can place these objects back into the hands, minds and hearts of African people.

I don't believe offering "temporary repatriation" is a great solution to this issue. It would be akin to treating symptoms and not the underlying illness. In the long run, doing that may cause more harm than good.

France's president Emmanuel Macron, for example, oversaw the restitution of 26 artifacts back to Benin and has expressed plans to return historical treasures back to the continent. Does this sound like a foolproof process and would you consider him an example for other Western leaders?

I certainly commend President Macron not just for taking on the issue but also sending the clear message that it was a priority issue by appointing serious scholars, Felwine Sarr and Bénédicte Savoy, to create the report. If indigenous people of Africa request the return of heritage artifacts in cases where they are proven to be ill-gotten by a Western museum, I don't see a reasonable argument which could be made against that. Ultimately, very few things in this life are totally foolproof—there will always be competing interests, especially with regard to objects that have, at this point, been in European collections for over a century. Unfortunately, people will often gravitate toward unfairness because it is what they have always done rather than because it is right.

"I can't help but see irony in European institutions fighting to hold on to the very history it has claimed we do not have."

One excuse that is used for the delay in returning items is that there isn't infrastructure or proper facilities on the continent to house them. What are your thoughts on this?

There are many institutions all over Africa that have the capability to preserve, and—more importantly—teach with these objects. A few examples I can think of which all lent objects to the current iteration of the traveling exhibition Caravans of Gold on view at the Block Museum at Northwestern University are the Nigerian National Museum, the National Museum of Mali and others. There is also the National Museum of Dar Es Salaam in Tanzania, the newly opened Museum of Black Civilizations in Dakar—there are literally over a dozen museums in Morocco alone.

It's a sort of circular, "chicken vs. the egg" sort of argument to make. What came first? Even if it were entirely true that there is no infrastructure to support high quality museums in Africa—how did that come to be so? Again, we do not get to pick and choose what parts of history we treat with fidelity. So many governments are still recovering from the quagmire that is the postcolonial moment. The roughly 50-60 years of independence in many parts of the continent is a drop in the bucket especially in consideration of all that has transpired in that time. We can talk about contending with structural adjustments plans, civil war, the scourge of HIV/AIDS, climate change, and more.

To persevere through these things when you are essentially just beginning to find your own footing is miraculous. The fact is, the myth of the underdevelopment of the African continent has long been perpetuated for the continuation of unchecked exploitation of the land, its people and resources. Full stop. There is a quote from the German philosopher Hegel that I like to reference. He wrote that Africa is "no historical part of the world," with "no movement or development to exhibit." I can't help but see irony in European institutions fighting to hold on to the very history it was claimed we do not have.

What is being done on the part of African governments to ensure the return of items?

There have been investments in protecting cultural patrimony and building mechanisms that support contemporary art in many African countries. As I shared before, the Nigerian, Malian, Senegalese governments have all thrown financial support behind maintaining cultural patrimony. Also, I know for sure there are citizens who have formed restitution committees that have fought for years to restore cultural heritage artifacts—the Benin Dialogue Group, The Association for the Return of the Maqdala Ethiopian Treasures (AFROMET) are two that immediately come to mind. I don't know if I can say that there isn't enough being done.

It's good to keep in mind that there isn't necessarily a precedent for any of this. It's a marathon and will require a prolonged effort on multiple levels of engagement and action.

Let's say that all the stolen items were to be returned, does the flow of African art into the Western world just stop? Should it stop? How do we ensure that the inevitable exchange between the continent and the Western world is fair and equitable?

I don't think it should or will cease. Provenance is one of the most important facets of the situation. If it can be proved that an item was procured legally from people who were actually authorized to make a sale or bequest, then we should be able to continue sharing these objects with the world. This applies to African patrimony, but also objects from all over the world.