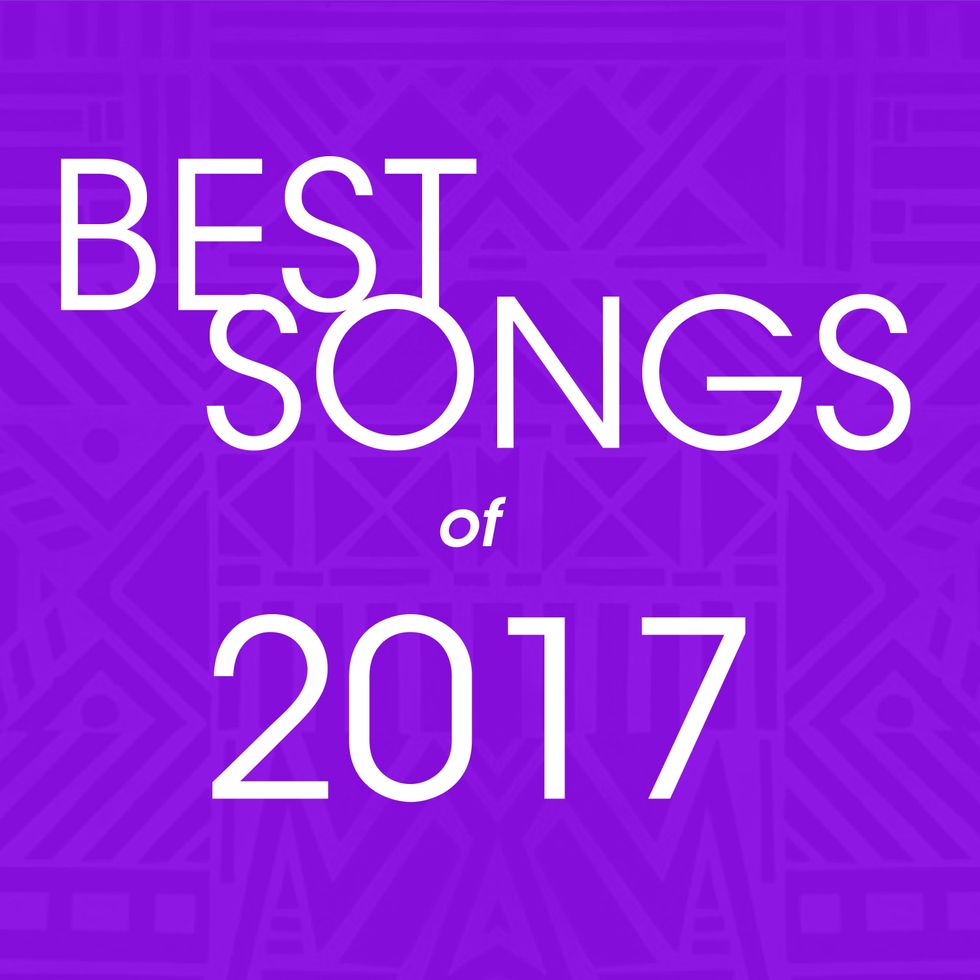 The year—despite its many faults in politics, race relations, climate issues, and more—has at least been good for music.

Though the larger music industry has definitely had its fair share of shake-ups, the music we tend to cover here at OkayAfrica only continues to thrive and spread its reach.

Things kicked into overdrive closer to the middle of the year with Black Coffee being sampled by Drake in More Life, Cassper Nyovest releasing Thuto, J Hus dropping his addictive debut, AKA & Anatii sharing their collaborative album and, of course, Wizkid's much-anticipated Sounds From The Other Side finally coming out.

The year would round itself out with subsequent noteworthy releases like Tiwa Savage's Sugarcane EP, Sarkodie's tour de force Highest, and two incredible compilations—one of Burkinabé classics and the other of lost Somali tapes—getting nominated for next year's Grammy Awards. That's not to mention the waves of singles that we had on repeat all year, from "Unforgettable" to "Iskaba" and more.

In the age of playlists and streaming, we decided for our main music roundup this year to highlight The Best Songs of 2017. In an effort to keep the democratic process alive, even in our smallest of ways, we had the entire OkayAfrica staff vote on the following selections below. The ones with the most votes are the picks included here.

So, without further ado, check out our Best Songs of 2017 listed in no particular order.

Mr Eazi connected Nigeria and Ghana like no one else in his Life Is Eazi, Vol. 1 - Accra To Lagos mixtape, and the E Kelly-produced "Leg Over" is that mixtape's crowning jewel. The song, built on a brilliantly minimalist fusion of a guitar line and drums, follows Eazi singing about a girl who's playing him—giving him the leg over.

"Leg Over" was actually never meant to be a single, Mr Eazi has mentioned in interviews, but once it started to pick up as a dance hashtag on Instagram with people doing the #legoverchallenge he decided to focus on it. Its accompanying music video shows a group of dancers doing their best version of the challenge and features cameos from Wizkid and Maleek Berry. Don't forget to watch the New Edition video remix.

The veteran Nigerian singer Wande Coal returned with one of the afrobeats anthems of the year in "Iskaba," a track that was also propelled to massive levels with the help of a dance challenge—it even has its own dedicated Instagram account.

The infectious song was written by Coal alongside DJ Tunez and riffs on its title "Iskaba"—which the artists have mentioned means energy and love—for a potent feel-good jam.

"If" cemented the mid-tempo pace as 2017's preferred afrobeats groove. The Tekno-produced single was an early sign of what would be a great year for Davido, as "If" quickly gained traction to become one of the most popular songs of the year.

The massive single is one of Davido's most successful releases ever, holding the number 1 spot on the Nigerian charts for weeks and becoming his most viewed music video on Youtube at 54 million views and counting. We've lost count of how many times we heard crowds shouting along to "30 billion for the bank account" when DJs dropped this track.

The syncopated beat and flute accents that kick off "Pain Killer" are fire by themselves—add a silky smooth chorus from Runtown and verses from one of the best African rappers around and you've got an undeniable banger.

It's safe to say at this point that Tanzania has become somewhat of a benchmark for music in East Africa. Vanessa Mdee isthe region's afro-pop princess whose efforts have helped give Swahili language music a more global appeal.

She lands on the list with "Kisela" featuring Mr. P of Nigerian duo P-Square. It's an emotional, mid-tempo track that tells the story of a woman heartbroken by a man who is playing games with her. The E Kelly produced single shows a different side of the singer who confesses the lyrics were inspired by her own personal experiences. —Camille Storm

Tiwa Savage, the 'Queen of Afrobeats,' surprised everyone when she dropped the new Sugarcane EP out of blue in September. The EP featured a collection of six expertly-crafted excursions into love and afrobeats, and one of its clear highlights was the Spellz-produced "Ma Lo" featuring Wizkid.

"Ma Lo" means "don't go" in Yoruba, Tiwa told us in an interview back when she released the song. Its music video follows the Nigerian stars to a party at the Fela Kuti family's New Afrika Shrine in Lagos. The vibe of "Ma Lo" is so good that even Chris Martin was filmed dancing to it.

On his biggest songs, South African rapper Kwesta mixes English and IsiZulu effortlessly while rhyming over kwaito-influenced house beats. That hit-making recipe was proven with last year's "Ngud," one of the biggest SA hip-hop songs of this era, and continues to deliver gold with "Spirit."

In "Spirit," Kwesta connects with Wale for another alluring joy ride into one of South Africa's most exciting sounds. You can smell the beer and cigarettes in the shebeens of his hood Katlehong (K1) through your speakers. —Sabelo Mkhabela

Wizkid's highly-anticipated Sounds From The Other Sidepushed the Nigerian star further on the global stage and "Come Closer," his third huge collaboration with Drake, after "Ojuelegba (Remix)" and "One Dance," was its biggest single.

The song had a bit of a confusing release as it was originally leaked in January as "Hush Up the Silence" before being officially announced. Nonetheless it became a massive track on both sides of the Atlantic, with its addictive Sarz-produced beat becoming the perfect afrobeats-meets-dancehall bed for Wizkid and Drake's vocals. Drake was noticeably missing from the official music video, something Nigerians dragged him endlessly for on social media after the "One Dance" debacle.

Ethiopian-American singer Kelela's debut album Take Me Apart has been getting many spins at the office since it dropped a few months ago. "LMK," its lead single, sees Kelela asking for transparency in a relationship atop synth-filled, dance production.

"The song is directed at a man who's being weird instead of being honest," she's mentioned in interviews. "Does casual have to be careless? Is wifey the only woman who deserves your respect, and why do you think I want more when I demand it? These are my questions." —Damola Durosomo

At the top of the year we included J Hus in our list of Black British Artists to Watch, and we're glad we did because the young British-Gambian rapper has only delivered bangers all 2017.

J Hus' debut album, Common Sense, is a prime example of the ongoing musical conversations between West Africa and its diaspora in the UK. Him and producer Jae5 seamlessly blend UK grime with afrobeats and dancehall into a modern style some are calling Afro Bashment. Whatever you want to name it, there's no denying its originality and potency—and "Did You See," the lead track off the album, proves just that.

"Unforgetabble" was the song you heard blasting from what seemed to be every single street corner and car this year. The highly-addictive single is built on a pitched-down steel drum melody and a syncopated beat that lives at the perfect intersection of an afrobeats and reggaeton rhythm.

Even though its French Montana's song, Swae Lee makes "Unforgettable" his own with a perfectly-delivered chorus. The single's music video was shot in Kampala and features Ugandan dance crew Triplets Ghetto Kids, who were also flown to the U.S. for this amazing Jimmy Fallon performance. We've previously talked to French Montana about his Moroccan background, which you can revisit here.

Olamide sparked Nigeria's latest dance craze with his high-octane single "Wo!!." For the track, the Nigerian rapper teamed up with his in-house producer, Young John, to create an all-out street banger that even Chelsea soccer stars have been filmed dancing to.

There's no doubting that Young John, "the wicked producer" as his tag goes, does some of the heavy lifting here with this monster of a beat. "Wo!!" became both a meme of its own and a bonafide street anthem.

Drake "Get It Together" feat. Black Coffee & Jorja Smith

It's no secret that Drake likes to 'borrow' sounds from across Africa. In his playlist More Life, he remixed South African superstar DJ and producer Black Coffee's 2011 hit, "Superman" for one of the release's standout tracks, "Get It Together."

The SA house pulse of the original is undeniable as Drake and Jorja Smith lay down their new vocals over it (the song was initially rumored to have Jennifer Lopez on vocals, as you can hear in this clip). With songs like this and titles like"Madiba Riddim," the SA influences were clearly felt in More Life, although not all South Africans were impressed.

Sampha's beautiful album, Process, addressed the necessity of vulnerable black masculinity, as our contributor Alisha Acquaye wrote earlier this year. "(No One Knows Me) Like the Piano," a song Sampha dedicated to his Sierra Leonean mother, was the delicate centerpiece of that album.

"The more time that passes, the more I see the extent of her love for me," Sampha wrote on Twitter. Process went on to beat Stormzy, J Hus and Ed Sheeran for the UK's coveted Mercury Prize earlier this year.

Davido had such a good year in terms of output that we had to give him two spots on this list. In the middle of the year, the Nigerian star delivered the devastating one-two punch of "If" followed by the supremely well-crafted "Fall."

It was a combo that saw many crown him the new king of Nigerian pop or, at least, the reigning artist of Nigeria's new Pon Pon sound, which dominated airwaves in 2017. The chorus of "Fall" is the highlight here, as Davido drops lines referencing both Cristiano Ronaldo and Nintendo games to simply tell his girl, "I don't wanna be a player no more." The song got so big that it even caught the attention of Ronaldo himself.

After excelling as a guest on massive hits from the likes of Black Coffee, DJ Sliqe, Sketchy Bongo, and a few more in the past two years, Durban singer Shekhinah released her first solo single "Suited" in August.

"Suited" hit a million views in no time and became the cornerstone hit of Shekhinah's debut album Rose Gold, a record that's essential listening. It's very special," Shekhinah told us in our in-studio interview with her earlier this year. "I'm hoping it can be an R&B/pop album from Africa that actually stands out everywhere." —Sabelo Mkhabela

Praiz "Me and You" feat. Sarkodie

The second the beat drops to "Me & You" and that string melody hits you're in a trance. Nigerian R&B singer Praiz connected with Ghana's top rapper Sarkodie for this absolute jam of a song. "Me & You" makes for a killer Nigeria-meets-Ghana concoction—one that we had on constant repeat all year.

YCee connected with Maleek Berry for the infectious "Juice," a massive hit produced by Adey that became one of Nigeria's biggest songs of the year, topping the charts for weeks. The single was included in Ycee's excellentFirst Wave EP, an 8-track collection of prime afrobeats with endless replay value.

Adekunle Gold's "Only Girl" is pure magic. The single, which rode high in the Nigerian music charts, saw the hit-making songwriter team up with the buzzing Moelogo and producer Lekaa Beats for an addictive marriage of romance and shiny guitars.

British-born Nigerian Maleek Berry followed his solid Last Daze of Summer EP with "Been Calling," a catchy afrobeats-meets-dancehall concoction about longing for a girl. Its music video follows Berry as he explores virtual reality love in a desert haze.