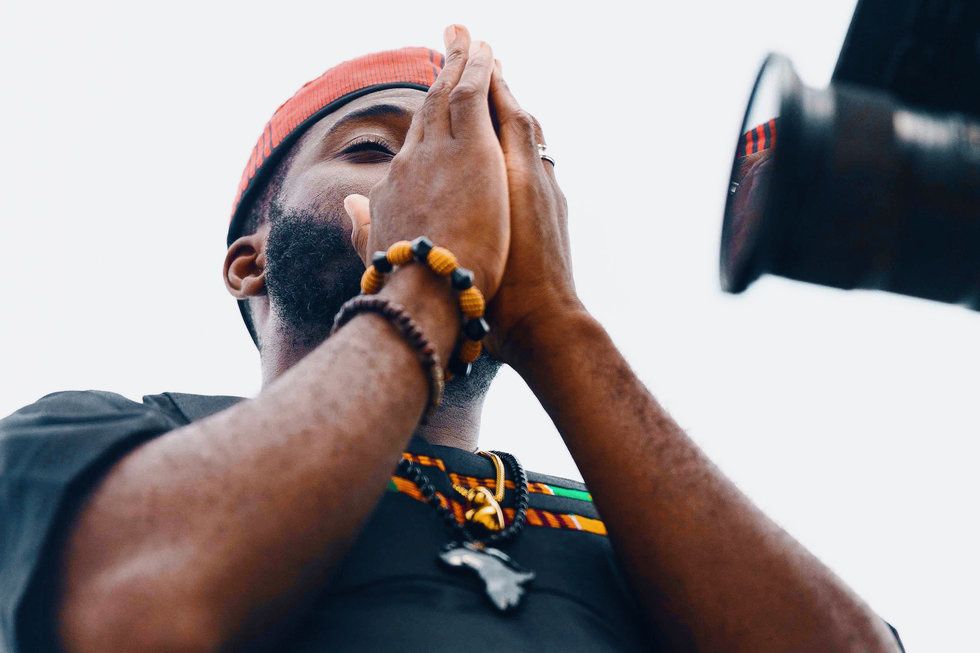 It looks like Kwestagot the summer covered once again. His brand new single "Vur Vai" is the perfect song to get turnt to. Well, just like many previous hits of his like "Nomayini," "Ngud'," and "Spirit" among others. "Vur Vai" has a huge kwaito influence; the mid tempo rhythm, those airy pads and of course the bass. The song, which is produced by Makwa, is another shebeen anthem. Kwesta tells the story of an nonsensical drinker—you know the type that doesn't want to leave at the end of the night.

Mannywellzis a buzzing Nigerian-born artist whose music blends influences from hip-hop, RnB and West African rhythms. His recent Soulfro EP has earned him millions of streams online and he's even opened for Jidenna on tour across the US. Manny is now sharing his latest single "Yeoo," an uplifting and addictive remix of his Soulfro standout track that sees him link up with Nigeria's Adekunle Gold.

Wuod Baba is an up-and-coming artist whose vernacular rap style is a refreshing display of authenticity in the Kenyan hip-hop scene. Born and raised in South C, a creative hub in Nairobi, he has managed to cultivate his own unique sound dubbed as "the Luo Trap." In his new single, "Akinyi," Wuod Baba flexes his lyrical prowess and effortless flow over an explosive trap beat. Akinyi is a name given to a Luo girl who is born very early in the morning. The song is about a young independent girl with high levels of positive energy and is always winning.

Yemi Aladeis back with the music video for her latest single, "Oh My Gosh." The new visual for the DJ Coublon-produced track follows Yemi as she gets gifted some fancy cars, parties with her girls in a pool and mansion, and eventually proceeds to get pulled over. It's got all the great dance moves we've come to expect from a clip by the Nigerian star.

Ghana's Stonebwoyis having a strong year following the release of his latest album, Epistles of Mama (EOM), which paired 12 dancehall tracks with 12 afrobeats songs. The reggae-dancehall star is now linking up with one of the world's dancehall heavyweights, Sean Paul, for the new music video for "Most Original," one of the clear standouts from EOM. This new video, which we premiered, was directed by Jay Will. It takes place in Jamaica and follows the tale of a love story in the ghetto.

Juls has been delivering steady hits for years now. In his recent single, "Saa Ara," the producer teams up with buzzing Ghanaian rapper Kwesi Arthur and Akan for an infectious blend of vintage highlife instrumentals and booming hip-hop beats The single is now receiving a beautiful new music video shot Ghana. It features epic shots of the coastline and Elmina Castle, the first trading post built on the Gulf of Guinea and the oldest European building south of the Sahara.

Petite Noir is readying the release of his upcoming EP, La Maison Noir / The Black House. The South African artist has already shared the EP's energetic lead single, "Blame Fire," and is now following that up with the second full song we hear from the release, "Beach." The new single, which is built swaying synthesizers, features a verse from Danny Brown andadditional help from Nukubi Nukubi. It sees Petite Noir singing lines like, "If this life is worth living, I hope you hear about me"

Major Lazerhave been sharing some great collaborations with the likes of Burna Boy for "All My Life" and Babes Wodumo in "Orkant/Balance Pon It." A third one has now dropped in the form of "Tied Up," which features Mr Eazi and London singe Raye. It comes accompanied by a striking new music video that focuses on the buzzing youth of Accra, Ghana.

Philly-based afrobeats singer FIKI comes through with a banger track and video for her latest single "I Got It." This banger's tailormade for your dance floor activities.

"I Got It" is available on Spotify and iTunes/Apple Music now.

Gyedu-Blay Ambolley has been releasing his entrancing blend of Ghanaian highlife, Afro-funk and hip-hop since the late 1970s. His inclusion of faster dance rhythms with quick vocal delivery, as heard in classic records like Simigwa, made him one of the main precursors of Ghanaian hiplife—and of hip-hop across the world. Check out"Simi Rapp," a 1996 classic from Ambolley that showcases his infectious mix of highlife rhythms with rap.

Efya enlists Mr Eazi for her latest standout collaboration, 'Mamee,' the Ghanaian singer's second single of the year. Following the massive success of "Skintight" they team up once again to deliver another catchy tune, produced by MOG Beatz. The music video sees Efya and My Eazi simply vibing to the songs bubbly production and lyrics about a complicated relationship. The visuals are colorful and electrifying and prove that the two make a great duo both sonically and visually.

Nasty C's A$AP Ferg-assisted single "King" just got treated to visuals. The MC and some of his goons are living their best life in NYC in the video which is directed by award-winning UK-based Nigerian director Meji Alabi.