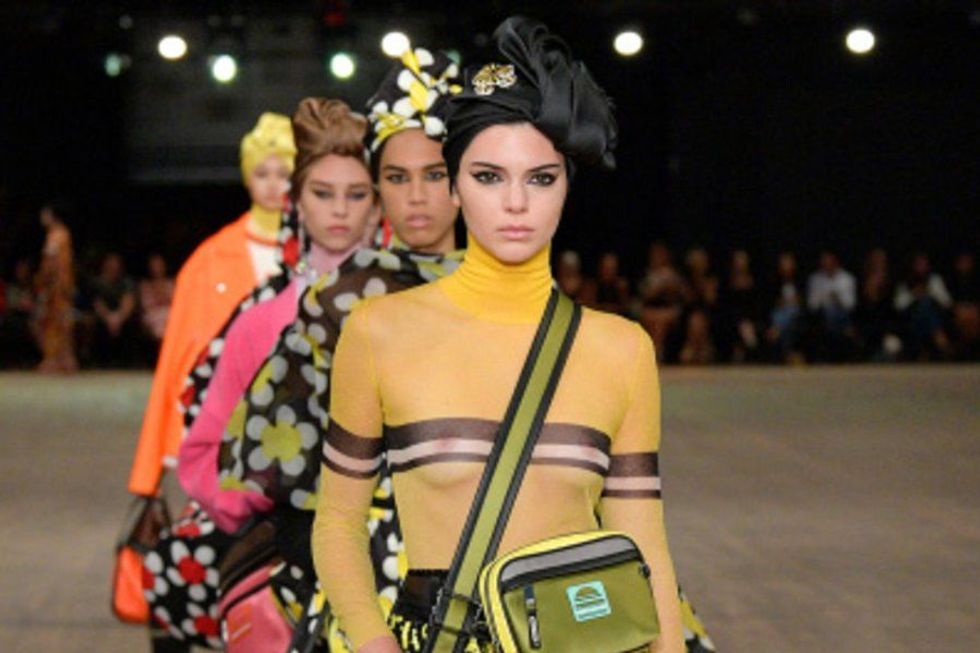 Yesterday, luxury fashion label, Stella McCartney came under fire for, once again, copying traditionally African designs, without even the slightest acknowledgment of the source.

They debuted items from their new Summer/Spring 2018 collection during Paris Fashion Week, which featured a number of dresses tops, and jumpsuits with ankara material. Upon seeing the clothes, many Africans on social media took note of how similar they looked to things we've all seen our moms and aunts wear for years. They showcased these "African-inspired" items on a group of mostly white models.

It was quite obvious that there was little to no regard for the origins of these designs, which Stella McCartney will undoubtedly profit generously from.

As we all know, this is not a new, or even, rare occurrence—white folks have been shamelessly stealing culture from us since, well, forever. While we could list countless examples of this, we really don't have all day. Below we list just eight recent times white designers have used African designs and failed in every aspect.

Who knows, revisiting such occurrences and examining their implications, might help to reignite a fire in us and bring us closer to exploring real ways to protect our cultural property.

Marc Jacobs is one of the fashion world's repeat offenders. Last year, the designer came under fire for sending white models down the runway with colorful dreadlocks during his Spring 2017 show. This was around the same time that the U.S. Circuit Court of Appeals ruled it legal to ban the wearing of dreadlocks in the workplace. Jacobs responded to the backlash on Instagram, “I respect and am inspired by people and how they look. I don't see color or race—I see people." After being dragged for his "all lives matter-esque" statement, he apologized "for the lack of sensitivity unintentionally expressed by my brevity. Of course I do 'see' color, but I DO NOT discriminate. THAT IS A FACT!"

After we just had Marc Jacobs throw some dreads on white supermodels & give a non-apology - apology, during NYFW😾 pic.twitter.com/VYUhOwcWt1
— Tiffany Lighty (@tiffanylighty) September 22, 2016

That wasn't enough for Jacobs, though. He made headlines again last month, during New York Fashion Week after putting headwraps on white models during his Spring 2018 show.

Earlier this year, the famous brand debuted a line of colorful, printed blankets as part of their menswear collection. The blankets, which carbon copies of Basotho blankets—which possess deep cultural meaning for Basotho people—sold for R33,000. While the same items are commonly sold locally for under R1,000. The blankets ended up selling out in South Africa, leading many Basotho to call out the brand for capitalizing off of their culture without involving Basotho citizens.

Louis Vuitton is not new to this either, the label also released a range of Maasai-inspired clothing in 2012, called Maasai. As you probably guessed, Maasai people were neither consulted nor compensated for this designs.

In fall 2013, luxury fashion houses like Stella McCartney, Céline and Louis Vuitton unveiled new tops, skirts and bags which featured simple plaid designs that channeled the highly recognizable plastic tote bags, commonly referred to as "Ghana Must Go Bags" in parts of West Africa. The design was considered the "must have pattern of the season." Major retailers like TopShop and Zara also began selling these items on their site. The generally inexpensive bags, manufactured in China, became part of a distasteful trend known as "China Town Chic" or "Migrant Worker Chic."

In 2015, a Valentino show sparked controversy for its collection inspired by "wild, tribal Africa," as the label put it. “Primitive, tribal, spiritual, yet regal," was also used to describe the line that was supposed to represent a “journey to the beginning of time & the essential of primitive nature." Basically, it was an insensitive, negative trope-filled fiasco. The show, once, again featured majority white models who wore their hair in cornrows and dreadlocks.

Burberry's 2012 collection featured designs that drew heavily on East African kitenge textiles. However, when asked about the inspiration behind the clothing, Burberry's chief designer, Christopher Bailey, denied any African influence, claiming that the pieces were inspired, instead, by British sculptor Henry Moore. After a quick google search, we were unable to find any images of Moore rocking such prints, but that's neither here nor there. Bailey's statement came off as an attempt to avoid potential conflict, in-turn robbing Africans of acknowledgment.

In 2007, the Ethiopian Intellectual Property Office requested royalties from British fashion designer Matthew Williamson, for copying the Habesha kemis traditionally worn by Ethiopian woman. "We are very unhappy with the actions of Mr Williamson," said the group. "These are the dresses of our mothers and grandmothers. They symbolise our identity, faith and national pride. Nobody has the right to claim these designs as their own."