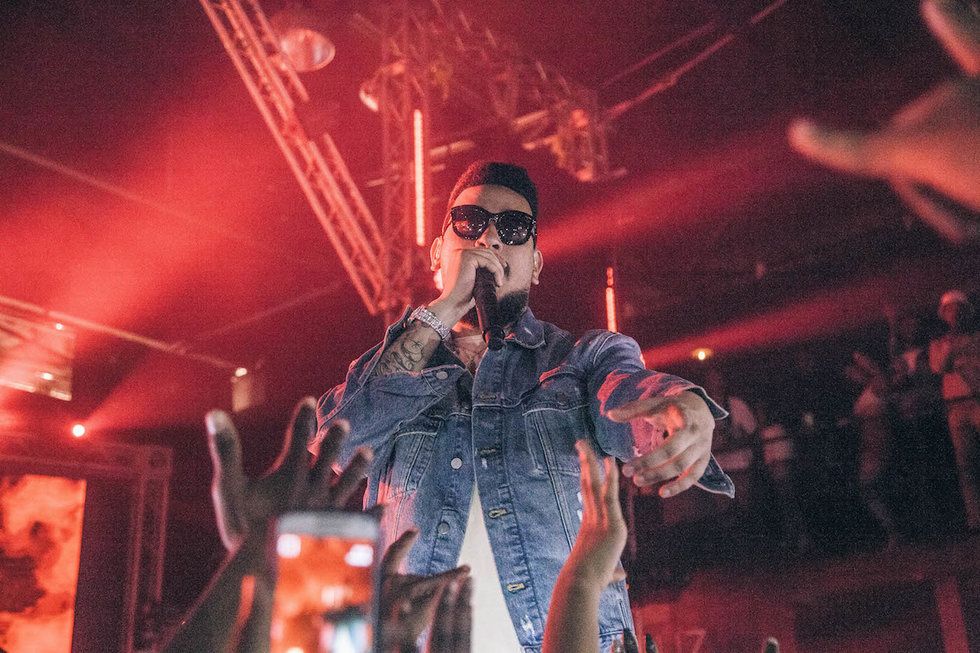 AKA 'Touch My Blood'

Touch My Blood, AKA's highly anticipated third studio album is finally here. The album features the likes of OkMalumKoolKat, Yanga Chief, JR, Stogie T, L-Tido, Kwesta and Kiddorminant. Kairo. The rapper said the album is his last, as he plans to focus on his business. If he lives up to his word, then the man has had one of the most prosperous careers in South African hip-hop—he has managed to remain a head honcho, dropping hits consistently since 2011 when he released "Victory Lap," his breakout hit.

DJ Tunez & Flash 'Too Much'

DJ Tunez and Flash link up once again on their latest single "Too Much," the highly-anticipated follow-up to their 2017 single "Get Up. " "Too Much" is a breezy, made-for-the-summer jam, that sees Flash singing about a lady friend who is so wonderful that she's simply "too much" to handle. "The song explores the love, beauty and style of ladies across the globe," said the artists in a press release.

Skeptaand Wizkid have been circling around each others' sonic atmospheres since the massive "Ojuelegba" remix with Drake a few years ago. The two now come through with what is, surprisingly, their first official collaboration in "Bad Energy (Stay Far Away)." The single is a low tempo, slow-burning jam produced by Nigerian hitmaker Sarz.

The 2018 World Cupwelcomes 5 African teams—Tunisia, Egypt, Senegal, Morocco, and Nigeria—and all except Nigeria have waited a very, very long time to field a squad once again on the world's biggest football stage. This soundtrack to Africa's World Cup covers a majestic blend of Senegalese Mbalax, Nigerian Fuji, Moroccan Gnawa, Tunisian Disco, and Nubian sounds from Egypt.

Okzharp & Manthe Ribane ‘Why U In My Way’

"Why U In My Way," which we premiered this week, is the first single to Okzharp&Manthe Ribane's upcoming album Closer Apart. On the song, Manthe soulfully croons about being hopeful and keeping your eye on the price as you go through life's challenges. Over a spacious instrumental by Okzharp, she sings, "Dreamers don't complain, dreamers don't explain/ Don't you fade away, so don't you fade away."

South African rapper Stogie Treleased a 15-minute long track this morning called "God's Eye." The song is essentially an EP—he raps over different beats, with the songs being separated by skits. The project is released to commemorate the youth who were slain by the apartheid regime in June 16 of 1976. In just 15 minutes, the revered wordsmith switches flows and raps from different perspectives—on two of the songs, he raps from the perspective of a slave trader and a lieutenant of the terrorist Islamic State.

Yemi Alade 'How I Feel'

Yemi Alade returns with the music video for "How I Feel," her first single of the year, and the last since the release of her 2017 album Black Magic. The music video, directed by Ovie Etseyatse sees the singer in an ethereal setting, living her best life while relaxing on a beach in Dubai and in the desert, where she serves up some stellar looks. We're trying to channel her vibe all summer. We've already dubbed Yemi a music video icon, and she delivers once again in "How I Feel."

South African singer and rapper Sjava's fans have been hounding him for new music. The artist hasn't released a new song since appearing on the Black Panther Album earlier this year. His latest single, titled "Abangani," features his label mates and frequent collaborators Saudi and Emtee, who are also the founders of ATM (African Trap Movement). "Abangani" is a quintessential ATM song, it's inspirational and combines modern and South African traditional vocals styles.

Zainab Donli, popularly known as Lady Donli is the 21-year-old singer-songwriter spearheading the new wave of Nigerian alternative music. The "all-round creative" is known for her soothing vocals and soulful alt-jazz sounds. Donli positively returns with "Games," the long-awaited first single off her forth-coming album. This time she experiments with a more up-tempo production that blends funk, soul, R&B; and dance music.

Veteran South African rapper Ms Nthabi recently released her first project in six years. Broken Silence precedes her debut album Welcome To Me, which came out back in 2012. The MC made a name for herself in the mid-2000s—"Breathe," her collaborative song with Reason is an undebatable South African hip-hop classic. So is her mixtape From The Streets To The Lab. While the rapper has never been shy to share the goings on of her life in her music, on Broken Silence, she shares the most intimate details, making this one of the most personal rap releases to ever come out of South Africa.

Kwamie Liv embodies the third culture child. The Copenhagen-based R&B singer—who was raised in Zambia & Kenya, but has also lived in Turkey, Sweden, South Africa, Ireland and Bangladesh—has been bubbling since the release of her Lost In The Girl EP. She now returns with the new single, "Follow My Heart," off her upcoming debut album, Lovers that Come and Go.

Bobson, the promising 21-year-old afro-pop singer, returns with a bumping new single "All Night," featuring Yonda. The new track was produced by Damayo and co-written by Timz.

Read: Bobson Could Be the Next Big Thing in Nigerian Afro-Pop