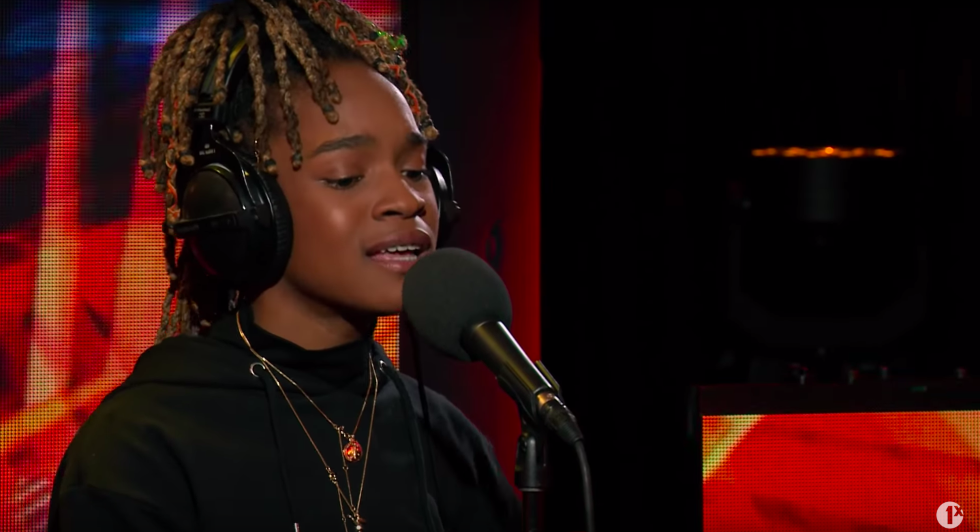 Last week, budding Jamaican artist Koffee had the internet buzzing when she performed an impressive rendition of Burna Boy's 'Ye," also known as the Nigerian National Anthem, during her first ever London show. Folks online responded excitedly to the 19-year-old singer's cover—it even got a cosign from Burna himself, who shouted the artist out in an Instagram post, and hinted at a possible collaboration in the near future.

Ghana's Kwesi Arthurcomes through with the bars in his latest music video for "One Stone." The new single and clip sees the buzzing rapper tackling an ominous beat produced by Yung D3mz as he drops some fiery lines, dubbing himself the "modern day Kwame Nkrumah" and shouting out Ghanaian rappers that have paved the way for him like Sarkodie. "I think it's time to remind people where we came from," Kwesi Arthur wrote on his Instagram page about the new song.

Priddy Ugly's music videos always stand out. The South African rapper's latest visuals for his 2017 song "Smokolo" from his debut album E.G.Y.P.T, are equally gripping. The video was directed by Armsdeal of CideFX Films. It follows the song's narrative, as Priddy raps about hustling (smokolo), while he can also be seen wearing a school uniform and going about his business. The other storyline in the video is of a grown up Priddy who works at a CD shop and a pizza joint to make ends meet.

Dua Salehis a rising Sudanese-born, Minnesota-based artist that's caught our ear. Saleh only started recording music two years ago but already presents a full-fledged, haunting sound in their debut 5-track EP, Nür (which translates to "light" in Arabic). "Warn Pants," the standout off Nür, sees Saleh connecting with producers Psymum (who's got credits with Young Thug and Future) and SinGrinch for an entrancing track built on a stuttering bass line. The single now serves as Dua Saleh's debut music video, which follows the artist through an icy field.

Shane Eagle shared the visuals for his collaboration with Bas. "Ap3x [remastered]" is a remake of "Ap3x" from the South African rapper's latest EPNever Grow Up. There isn't much going on in the video for Ap3x [remastered]," just Bas and Shane performing their verses in the calm streets of Amsterdam and a few shots of them interacting with fans. The video was shot while the two artists were somewhere in Europe for Bas' Milky Way Tour, which Shane Eagle is a part of.

Lady Donli is back with her first single of the year, and it doesn't disappoint. The Nigerian artist has shared the infectious track "Cash," from her forthcoming album Enjoy Your Life. The fun, mid-tempo track, produced by Benjamin James and Kingsley 'Knote' Okorie of the Nigerian live band The Cavemen as well as the artist herself, is all about the pursuit of money. The music video is directed by Kewa Oni and Seun Opabisi.

Ivy Sole has been capturing a lot of people's ears for her alluring blend of hazy R&B; vocals, rhymes and influences from her past as a spoken word poet. That's all clear in the Philadelphia-based artist's 13-song debut album,Overgrown. "Taken," one of the highlights form that full-length, sees the rapper-singer connecting with Ghana's B4Bonahover an airy afro-fusion concoction as they lament a desire over someone who's already taken. The track was produced by Sole's manager Ethan Boye-Doe, who's family has roots in Ghana.

South Africans Afro soul singer Berita released the single "Ndicel' Iiss" in January. The song's title literally translates to "May I have a kiss?." And the music video, which was directed by Callback Dreams'Makere Thekiso, depicts affection through the video's cast and the artist herself.

Durban hip-hop trio Golden Black's latest single "Cream" uses The Charmels' "As Long As I've Got You," the same sample as Wu Tang Clan's seminal 1993 single "C.R.E.A.M." Just like the Wu Tang classic, Golden Black's "Cream" loops the first four seconds of "As Long As I've Got You," the piano loop that defines "C.R.E.A.M." The difference is, instead of the boom bap drum pattern on the Wu Tang classic, "Cream" sits over 808s and an excessive bassline, as is usually the case on trap songs.

Nigeria's Steeky has a brand new addictive afro-fusion single for your nights out. "Kolobi" sees him linking up with producer Snagxy over booming synth bass and a strong groove. At under 2 minutes-long, the new track is a quick and punchy injection of energy.

London-based act Nizzyrolls through with the downtempo afro-fusion jam "Properly." The new single, which was produced by Nigeria's SynX, also gets a brand new music video from Director Q. "I was just in the mood to create something special for the ladies," says Nizzy, "but I also wanted to offer something different to the usual Afrobeats sound out there right now. I mentioned to Q that I wanted to appreciate that African black beauty with this video, and I think we pulled it off."

"I grew up in the Netherlands, in the aftermath of fathers exile from South Africa due to the Apartheid regime," mentions Joya Mooi about her impressive new single "Rice in Foil." "As the only kid of color in my class, I always felt like the outsider. While observing my classmates, I noticed that my lunch box was different, their concept of me and my family was different from the reality. My sister always told me to ignore people and to just believe that my life was for me, but I was and I'm still so sensitive. So this song is acknowledging this sentiment of being an outcast and giving space to a strong longing for equality from a young age, influenced by my own experiences."

"Rice in Foil" is available now

Ghanaian artist Ssue repurposes the popular children's rhyme into a darker track made for dance floors on both sides of the Atlantic. "Twinkle Twinkle" sees Ssue linking up with Megan and Baby G for this new jam.