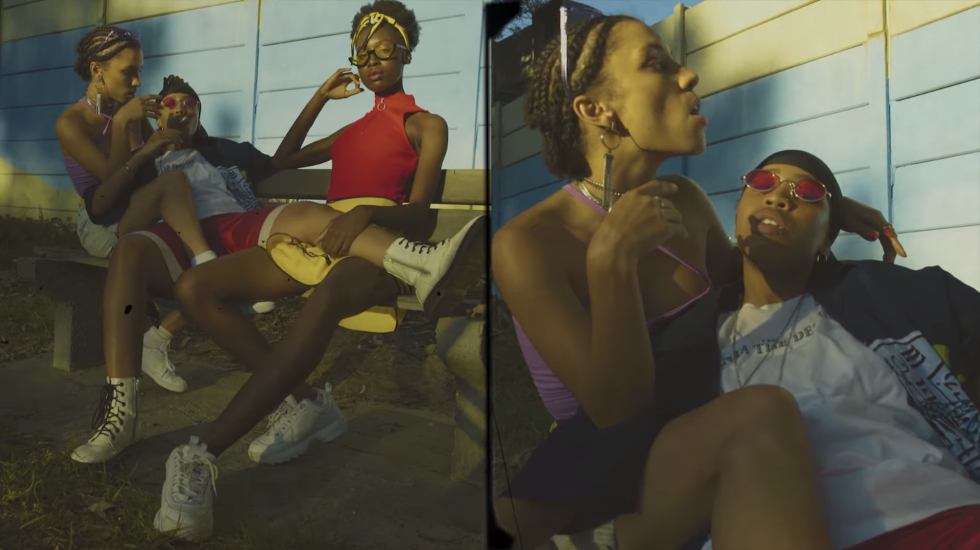 In February, Ayanda Jiya released "Falling For You," a love song that's equal parts soothing and banging, thanks to the heartwarming lyrics and a mean bass-heavy beat from Zeph Beats. About two months later, the South African R&B; singer returns with visuals for the stunning visuals for the song, which features the rapper A-Reece. The music video is directed by Cape Town-based director Motion Billy. The visuals are clean, and are based on two colors—when Ayanda isn't performing among white balloons against a white backdrop, she's performing in front of a red one. Probably to signify love.

Nigerian-American singer WurlD recently dropped his latest EP, Love Is Contagious. The new release features singles like "Show You Off," "Contagious," and, this one, "Paranoid"—a love song that blends elements of Afro-juju and pop into an alluring Shizzi-produced track. The standout track now has a new music video directed by Samuel J. Roberts which follows the blue-haired singer as he attempts to ease his lover's worries by reassuring her of his love. The director mentions that the new video was also inspired by Quentin Tarantino's horror film Death Proof, playing into the themes of paranoia from the song.

Dope Saint Jude's new music video takes you through a day in the life of the rapper and her friends. The video is teeming with character, as the crew gets up to the kinds of shenanigans friends engage in when they are together—from being naughty at a grocery store, causing a scene on the train, and hitting the club, where they end up beating up a man who tries to force himself into their space as they have fun. "Liddy" is a song from Dope Saint Jude's latest EP, Resilient, which was released in 2018.

Blood Orange 'Dark & Handsome' and 'Something To Do'

Blood Orange was the musical guest on The Late Late Show with James Corden, where he debuted two new singles for our listening pleasure. The British-Sierra Leonean artist, backed by a group of four vocalists perched on a bench behind him, performed "Something To Do" and "Dark & Handsome," while lying on a bed of grass with a guitar in hand and a British flag beside him. It's a still and mellow performance.

"Sondela" is a standout song from TRESOR's latest album Nostalgia. The song combines the Congolese-born, South Africa-based singer's tenor with Msaki's baritone to create a beautiful collaboration. The music video for "Sondela," which is directed by Marty Bleazard, blends the past and the present. The two artists can be seen posing for photos, flowers in hand, hitting those old school poses your mother, father and your elder uncles, aunts and cousins deployed for their photos when you were younger.

Windhoek-based singer One Joe connects with Australian producer Okey Szoke for this captivating experimental blend of Namibian 'Shambo' music, afro-pop elements and a wide array of electronic influences. The standout from their new 3-track EP, out now on Brother Sister Records, is "Efiku," a dizzying production built on One Joe's vocal samples and inspired by South Africa's shangaan electro and Tanzania's singeli music.

One Joe EP is available now

Priddy Ugly's latest banger "Uh Huh" features Nadia Nakai. The two rappers' relationship started when they paired up for the Bacardi Live Sessions last year. Which makes sense why Bacardi gets a few mentions on the song. "Uh Huh" sees the two MCs sharing sexually charged verses over an ice-cold trap instrumental. Priddy Ugly's delivery is still his strongest trait—in this particular song, he carries on pulling off unique flows and ways of delivering his rhymes.

Zarion Uti is a 20-year-old Nigerian singer-songwriter coming out of Atlanta, Georgia. "Silent" sees the young talent linking up with Nigeria's buzzing Odunsi (The Engine) and soulful singer Jilex Anderson, a catchy jam about asking your partner to put their phone on mute for a minute. Get into it above.

Burkina Faso rapper Art Melodyis someone that we've been following for years. He returns with the booming new single, "Tôk Tôko," produced by his longtime beatmaking partner Redrum. The track is a wild ride spearheaded by Art Melody's rough lyrical delivery, reverberating percussion and space-y synthesizers. "Tôk Tôko" is the first single from his upcoming album, Zoodo (which translates to Friendship).

A-Reecedropped a new song titled "Carele$." The track features The Wrecking Crew Member Wordz. Well, rather what's left of the crew. The Pretoria-based collective recently shed a few members, one of them being Flame. Fans have been speculating on what exactly happened to the crew, but nothing had been confirmed thus far. On "Carele$$," however, Reece lays it bare that the Reason Flame left the crew was a woman.