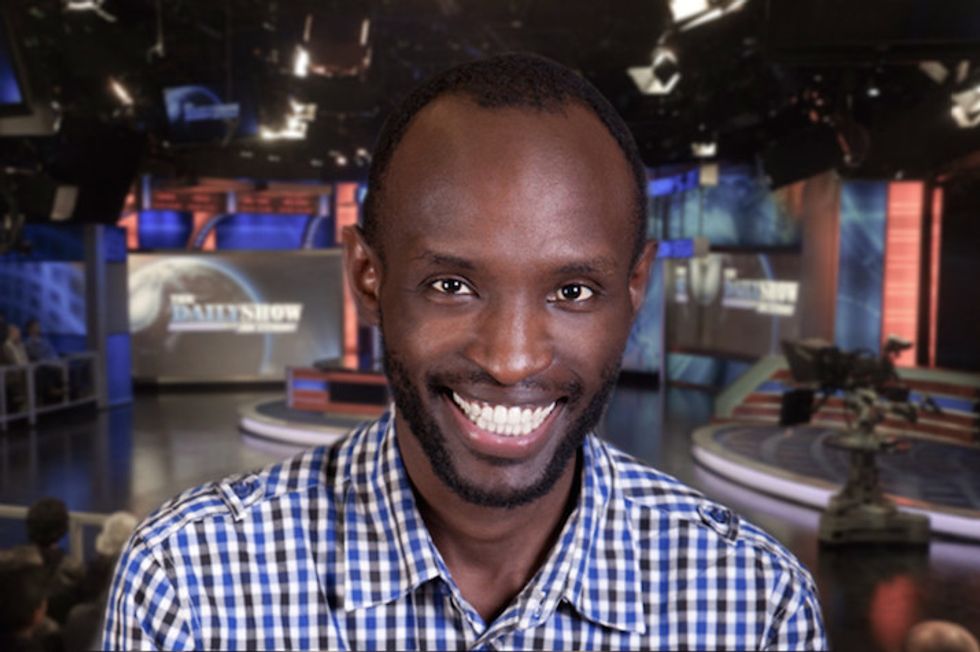 We spoke with Ugandan comic and 'Daily Show' writer Joseph Opio about his new gig writing jokes for Trevor Noah.

“Blackness has tremendously increased at the show," Trevor Noah promised shortly before his tenure on The Daily Show began in September. The “epidemic of blackness," as Noah called it, refers to a wave of new hires, including the show's new supervising producer, Baratunde Thurston, and two Ugandan-born staff writers.

One is the comedian David Kibuuka, previously based in South Africa. The other is Joseph Opio, a Kampala-born comic who rose to notoriety as the host of the political satire talk show LOLUganda, or as Opio refers to it, The Daily Show's “shameless and poorer Third World cousin."

Below, we speak with Opio about his new gig writing jokes for Trevor Noah.

Joseph Opio: I'm a qualified lawyer and a certified accountant; who just happens to earn a living as a standup comedian and screenwriter.

My mom thinks I'm a career disappointment. But the way I prefer to look at it: I'm the only person who can cook your books, provide a legal defense if the IRS presses charges and hopefully, convince a jury of your peers to laugh the IRS' case out of court.

I was born and bred in Kampala, the capital city of Uganda. But since 2014, I've been living in Manhattan, New York City; performing standup and writing comedy.

How did you get your start in comedy?

Well, I was on the Road to Damascus when suddenly, a bright light from heaven flashed around me and I heard a voice say: “Joe, Joe, why do you practise law?" Afterwards, I discovered that I was blind. Three days later, fish scales fell from my eyes and I started performing comedy. Hot damn! Wouldn't it be “totes on fleek" if my start in comedy had the same dramatic narrative as Saul's conversion to Paul? Yes! Oh well, what a shame!

The boring version: On completing law school, I was recruited to join Deloitte & Touche, one of the Big Four global accounting firms. I worked with Deloitte as a tax consultant for a year before I ditched it all to venture into the less predictable world of comedy.

We see that you're a political commentator and talk show host in your own right. For those that might not be familiar, could you tell us about LOL Uganda?

In 2012, I pioneered LOL, a weekly satirical half-hour program that remains the only TV show of its kind in East and Central Africa. During its two-year run on Ugandan screens, I singlehandedly wrote, hosted, directed, edited and produced every episode of LOL; which won instant fame for its irreverent humor and relevant sociopolitical commentary.

LOLUganda is both my Twitter handle and long-abandoned Facebook fan page. As an incurable Luddite, I'm very reluctant to cultivate a personal social media presence. So, LOLUganda is an online alter-ego that gives me that much-needed plausible deniability.

Was LOL Uganda inspired by The Daily Show? Prior to your move to New York, did Jon Stewart and his Daily Show have an influence on your work?

LOL was wholly inspired by The Daily Show. It was like a shameless and poorer Third World cousin to the more celebrated Jon Stewart version. I have watched The Daily Show for ages; starting with The Global Edition that used to air every Sunday on CNN. And yes, Jon Stewart's irreverent treatment of American and global politics was the primary influence on me pioneering a late night satirical show in Uganda.

What's Uganda's comedy scene like? What's your role in the scene there?

Sadly, Uganda's comedy scene is non-existent. The entire comedy industry has been stuck at take-off stage since it started. As things stand, Ugandan comedy isn't professional enough because there's no money in it and there's no money in Ugandan comedy because it isn't professional enough. That's the paradoxical crossroads at which the comedy industry currently finds itself trapped. What should come first? Professionalism or money? It's the chicken-or-egg dilemma that local comedians must resolve if comedy in Uganda is ever to come out of limbo and turn into a viable industry.

My role in the overall scene is hard to contextualize. I was the first Ugandan comedian to have his own satirical half-hour TV show. But having blazed that particular trail, outgrown the local scene and relocated to more advanced comedy markets, no comedian seems to have sufficiently stepped up to plug the subsequent vacuum.

Similarly, while I've tried to expand the reach of my brand of comedy by writing and performing standup for diverse audiences all over the world — from South Africa through Switzerland to the US — no Ugandan has tried to follow a similar path.

Instead of targeting the global audience with universal material, Ugandan comics appear more contented performing only the kind of comedy that appeals strictly to consumers back at home, Ugandans in the diaspora or other Africans, at best.

What were you doing before you started with your new Daily Show gig?

I was performing comedy on the international circuit and around New York City, in particular. Off stage, I was busy writing a number of screenplays and TV pilots.

How did you get approached by The Daily Show?

While performing on the New York comedy scene, I had the good fortune of crossing paths with Trevor Noah at The Comedy Cellar. We bonded over our mutual passion for comedy, did some work together and regularly kept in touch. When Trevor was hired as the new host of The Daily Show, he invited me to come onboard.

Now that you have this new job, where are you currently based?

Since The Daily Show studios are located in midtown Manhattan, I'm based smack in the centre of New York City.

What is your role on The Daily Show?

I'm the rookie in an extremely talented, richly experienced and lavishly decorated writing team that has accumulated more Emmy awards down the years than they care to count. So, my role is to learn and in time, hope to become half as good and half as decorated as the writers in place. Meanwhile, I pen scripts, pitch ideas and obsessively check my office for hidden cameras just to confirm that it all isn't some elaborate Yankee prank.

Is there a segment or joke you've had a hand in on the new Daily Show that's been your favorite or that you're most proud of?

By its very nature, writing for a late night show is a highly collaborative effort. The entire writing room pitches into each segment and episode. But that being said, so far, I'm most proud of the "Trump: America's first African president" segment we broadcast in our very debut week. It brought a global touch to a quintessentially American subject, allowing Trevor to swiftly showcase to the audience that unique outsider's perspective that he brings to The Daily Show.

If you could arrange for one Ugandan musician to appear on The Daily Show, who would it be?

I would pick Maddox Sematimba. Maddox is a bit of a tortured genius. But he's the only Ugandan artiste who is both gifted and interesting enough to grace The Daily Show.

Who from Uganda would you most want Trevor to interview on The Daily Show?

Keep up with Joseph Opio on Twitter at @LOLUganda.