The 13 Songs You Need To Hear This Week 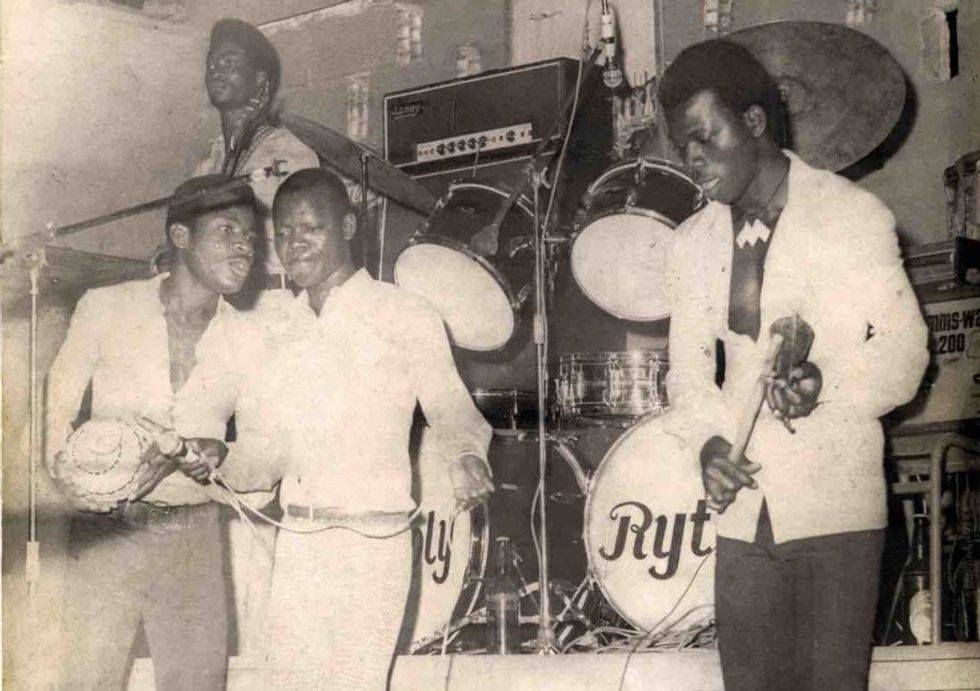 Sarkodie rolls through and proves, once again, why he's at the top of the African rap game with his latest drop, ""Ye Be Pa Wo." The new track, which was produced by fellow Ghanaian producer MOG Beatz (who previously did Sark's "Gboza") is a relentless injection of pure energy and rhymes. Sarkodie goes in, delivering solid non-stop bars over the addictive, percussion-heavy beat. This track is pure fire.

Tekno's singles just keep on coming, and here's the newest one. The Nigerian singer and songwriter dropped his latest single "Jogodo," which he also produced. The track has that easy but addictive beat that earned him a place among the new wave of Nigerian artists we've been seeing a lot lately. "Jogodo" is also a throwback to a more retro Nigerian sound, borrowing inspiration from Professor Linkin's 'Jogodo'.

For a decade now, Analog Africa has been releasing vintage and rarely-found music from across the African continent and its diaspora. One of the label's most popular releases over the years has been African Scream Contest, which featured a compilation of what the label describes as "Vodoun-inspired, psychedelic afrobeat, and heavy funk crossover" from Benin in the '60s and '70s. Analog Africa is now prepping the drop of African Scream Contest 2, which will feature 14 rare tracks along with a detailed booklet with liner notes and pictures.

Previous World Cup host South Africa did not qualify for this year's competition, but Cassper Nyovest is making sure his country still leaves a mark. The rapper released a remix of Jason Derulo's 2018 Coco-Cola World Cup Anthem. While Derulo's original pop track will get you onto the dance floor, Nyovest's version will transport you to the streets of Soweto, surrounded by an electric ambiance and the sound of vuvuzelas.

Just last month, Tiwa Savage came through with a reworking of her Sugarcane EP standout. "Get It Now Remix" saw the Nigerian star and Mavin Records first lady connect with Omarion, who added a new verse and layed down some nice duets alongside Tiwa. The new Meji Alabi-directed music video follows Tiwa and Omarion to a chicken shop and night out as they give each other the eyes while still flirting with their original partners.

DJ Tunez is one of the main connectors between New York City and the many buzzing sounds and artists coming out of Nigeria and West Africa. Since his start in a largely African community in Brooklyn, he's become Wizkid's official DJ and helped produced smash hits like "Iskaba" with Wande Coal. Listen to his exclusive "Afro Selections" playlist for OkayAfrica above.

Abu Obaida Hassanand the wonders of his five-string tambour remained largely a mystery. In the early 2000s, a prominent Sudanese newspaper declared him dead. Internet forums confirmed his passing. Many in Khartoum, Sudan's capital, said he had indeed died. But rumors that he was still alive persisted. What was always certain was Abu Obaida Hassan's mercurial talent.

South African rapper Yanga Chief is the latest artist to bless fans with a performance on the popular YouTube music series Feel Good Live Sessions. The artist reinterprets his hits with a three-piece band. He kicks off his set with a rendition of AKA's "Run Jozi," a song in which he was featured. He then follows with "Tricky," "Mbali Yami," "Anytime" and his latest hit, "Mntase."

Joshua The I AM "Glitch"

Joburg-based rapper Johsua The I Am, who just released his new music video for the single "Glitch," is one of the guys changing up South African hip-hop videos.

London-based producer SmartBeatz is readying the drop of his debut mixtape, Certified, which is set to feature several of the main names coming out of the UK Afrobeats wave. For his latest single, "Tell Me," he connects with singer Yemi Rush, who's been buzzing in the scene for tracks like "Kill Me" and "Do Me Right" with Moelogo.

Onaduja Yinka popularly known as Yinka Bernie is a self-taught music producer and artist. Bernie ook a break trying to perfect his sound and his music skills and came back again with his second single, "Silhouette," which introduced most people to his music. Yinka Bernie dropped his EP titled 19 & Over which is now followed by the 3-song Facades.

Olayinka Ehi is a Nigerian-born, New York-based afro soul singer who recently dropped the 4-song Story EP. "Jeje," one of the highlights off that EP, is a solid track carried by the singer's soulful vocals and some addictive beat work. Though relatively short, it packs a serious afrobeats dance punch in its 2-minute duration. The music video, which was directed by Marcus G, features some smooth dancing from Izzy Odigie.

Martyn 'Google Drive of a Genius'

Martyn is a multitalented rapper, singer and songwriter from Eastern Nigeria, but born and raised in Lagos, Nigeria. The young rapper began to build his professional career in music after interning at Chocolate City Entertainment, going on to release singles such as "City Lights" and Wizkid's "Ojuelegba Refix." Having musical influences such as Kanye West, MI Abaga, Drake, Wale, his music tilts heavily towards witty lyricism but retains melodic softness. Check out his latest release Google Drive of a Genius.

'Google Drive of a Genius' is available everywhere now from Okaymusic.