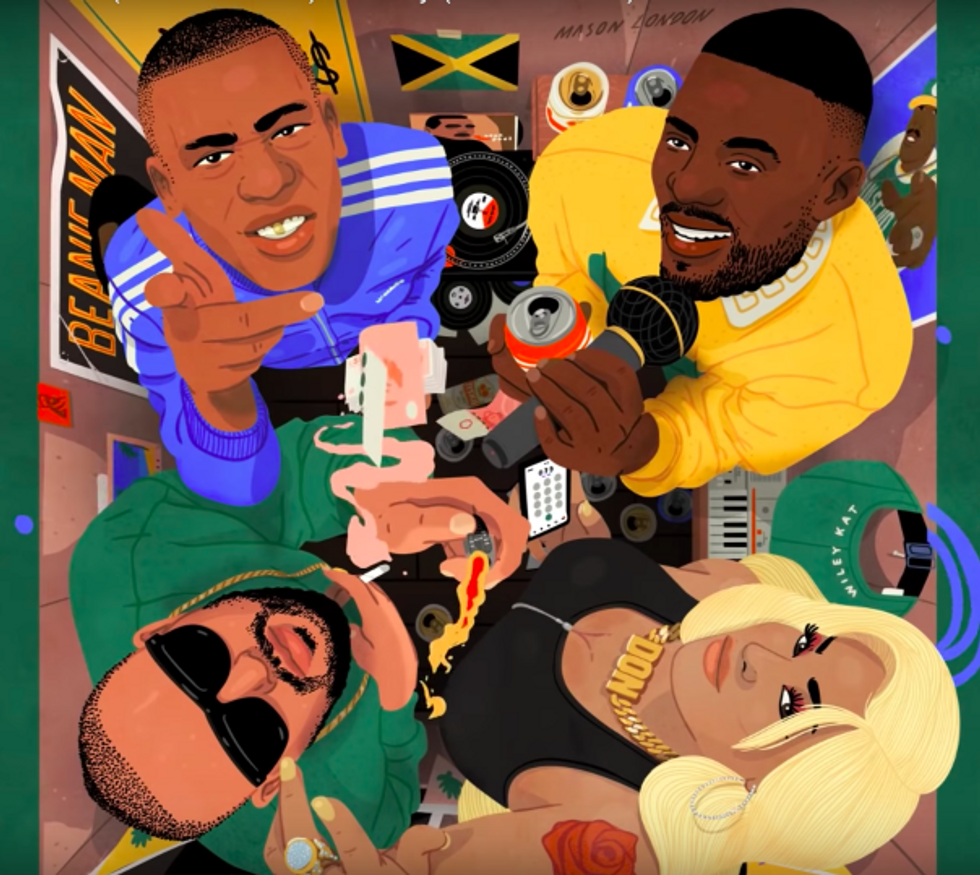 Brooklyn rapper Casanova rolls through with an energetic new collaboration with Davido and Tory Lanez. "2AM" sees the rapper going in over highly-infectious afrobeats-meets-pop beat work, in the same vein as we've heard from massive hits like "Unforgettable." The song was produced by 30 Roc. The single features the star power of Davido and Tory Lanez which gives "2AM" the increased potential to be one of those huge new jams that'll be getting constant spins this year on both sides of the Atlantic

Read our interview with Casanova about working with Davido

Nakhane comes correct with not only his music, but with his music videos—and his latest for "New Brighton" does not disappoint. Directed by Nigerian-British filmmaker Iggy LDN, the South African singer is a striking vision, shining in the midst of a rocky beach as he journeys through a mansion full of remnants of what used to be. Nakhane tells The Fader that "New Brighton" was written back in 2013 on New Year's Eve. Being present in his hometown of New Brighton, a township in Port Elizabeth, South Africa, he decided to view his city from the eye of a tourist for the first time. "I couldn't ignore the many colonial names and monuments that were triggers and oppressive reminders everywhere one went," he says.

After it was announced earlier this month thatIdris Elbais one of the many musical acts performing at Coachella this year, some folks on the internet were surprised to discover that the celebrated actor also makes music. In fact, everyone's favorite DJ turned mega-actor, began his entertainment career as a pirate radio host. Elba reminds us that his music-making skills are still very much in tact on a banging new collaboration with British rapper Wiley "Boasty," which also features fellow British MC Steflon Don and Jamaican heavyweight Sean Paul.

South Africa-based Congolese musician TRESOR just released yet another song from his upcoming album Nostalgia. Sticking to the nostalgia theme, just like the previous songs he has released from the album, "Electric Night," which features AKA, references South Africa's bubblegum genre, which was popular in the 80s. This is the second collaboration from the two artists. Their 2015 collaboration "Mount Everest," was also reminiscent of the bubblegum era.

RIMON could very well be the next big thing in alternative RnB. The 21-year-old singer arrived in Amsterdam with her mother while she was still a toddler and spent her early years living in Dutch refugee camps. Her debut EP, BBYGIRL FOCU$, was released last November and its newest single, 'dust', is the kind of ear candy you need for the new year. "'dust' is a continuation of a once very sweet love story which turned out to not be so sweet in the end. It's a song showing the pain, rage and confusion that I've experienced when someone who I really loved, broke my heart," says RIMON on email.

Mr Eazi enlists fellow Nigerian heavyweight artist Burna Boy for his latest song and video "Miss You Bad." The emotional song sees the artist singing about a girl he's longing for, and reflecting on a relationship that's gone sour. In the video, Mr Eazi sits in a colorful room while his special lady sits at a distance, capturing the strain in their relationship. Later in the video, he's joined by a fashionable Burna Boy who offers a tuneful verse about his own lover.

Sibu Nzuza is the latest artist to join South African popular indie label Ambitiouz Entertainment. The artist, who hails from KZN, was announced sometime last year and released the single "5 Minutes." The song's visuals stick to the song's lyrics; they show Sibu struggling to strike a balance between devoting himself to his work and spending enough time with his woman. Sibu Nzuza fell on our radar last year with his excellent single "Potoza" featuring fellow Durbanites Aewon Wolf and Simmy Sims. Sibu is part of the Afrocentric pop group Future Africa.

Just on the heels of being included on the Coachella 2019 lineup, Nigerian-British rapper Little Simz has dropped a new music video for her single, "Selfish," The Faderreports. Produced by Inflo with vocals by singer Cleo Sol, "Selfish" is the fourth single to come out of Little Simz' anticipated album GREY Area. The track is in tandem with the rapper's theme of being reflective on what it's like being in your mid-twenties—a struggle.

Tanzanian pop RnB star Vanessa Mdee delivers a gqom-infused banger in "That's For Me," a brand new collaboration with with DJ Tira, Distruction Boyz and Prince Bulo. This one's gonna get you on the dance floor immediately.

TOBi is a Nigerian-born, Toronto-based rapper making music inspired by his early life move to Canada and the experiences around immigration and culture shock. You might have previously heard his track, "Hidden Fences," closing out the finale of Insecure or gotten into his 2016 debut EP, FYi. TOBi is now sharing the new single and music for "City Blues," which sees the rapper taking cues from Marvin Gaye's "Inner City Blues" over a beat produced byFree n Losh. It's the first taste we're hearing from his upcoming debut album due later this year.

NewlywedsSimi and Adekunle Gold are putting their love on full display.The couple got hitched earlier this month in a private ceremony, but wanted to give fans a glimpse into their love story with their new song and video "Promise." In a quote via Konbini, Adekunle Gold had this to say about the music video: "Earlier in 2018, I asked my girl of 5 years to be my wife. Knowing all of my imperfections and shortcomings, she said yes! ... To be honest, it's easy to get lost in the limelight; so we definitely have a slightly obsessive desire for a private life that belongs to just us, however, we planned on sharing a little bit of the beginning of our forever with you."

Benin's own Shirazee kicks of 2019 with another single from his EP, Home and Away. In "Gari N Sugar," featuring Eugy, we get a taste (pun intended) of what vibing with a significant other romantically is like to him. And in the music video, premiering on OkayAfrica, we see Shirazee post up in the London neighborhood of Camden, walking through Ridley Road Market daydreaming of his snack. "'Gari N Sugar' came to me when I was looking for the best way to sonically describe the greatest love chemistry possible, because nothing beats a good bowl of garri with sugar in ice water (throw in some peanuts and or nido milk if you poppin')," Shirazee shares with us.

Rina Mushonga 'For A Fool'

Dutch-Zimbabwean, London based Rina Mushonga comes through with an alluring blend of indie synth music with afropop in her new single "For A Fool."