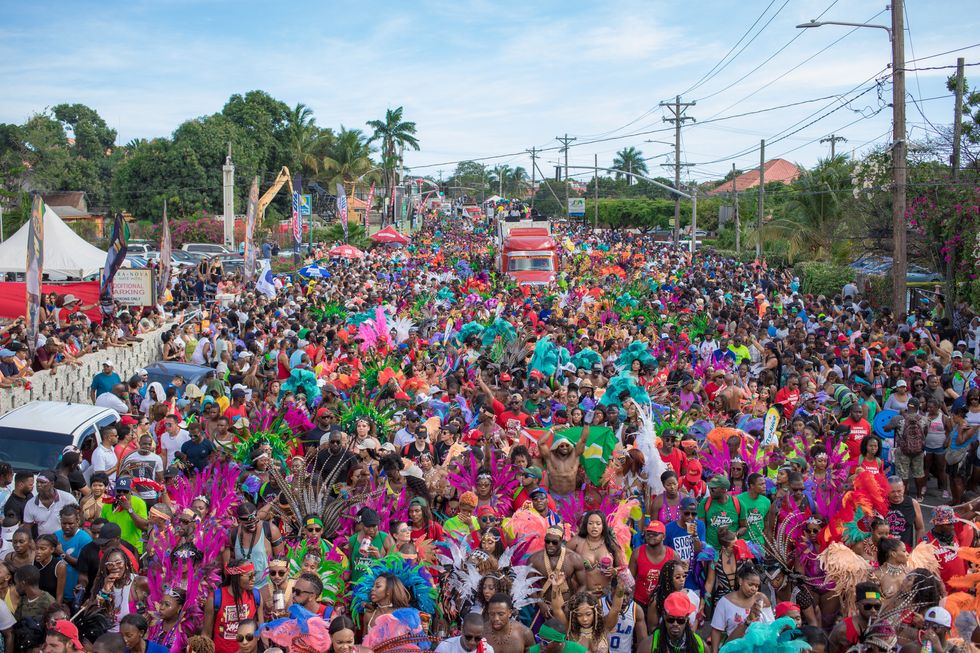 The runaway popularity of African music at Caribbean carnivals has even the soca purists excited.

It's 5:30 in the evening on a Sunday in Kingston, Jamaica and masqueraders are revelling down Waterloo Road, on the last lap of their day-long Xodus Carnival road march chanting "Are you done talking, tell me baby are you done talking." The song, "Fall" by the Nigerian superstar Davido echoes through the streets for what feels like the hundredth time that day. Revelers in feathered backpacks stop to bust a sweet whine to the tune.

West African afrobeats hits, like "Drogba" by Afro B, and "Soco" by Wizkid, have been making their way into Caribbean carnival celebrations for years now—pushing crowds into frenzies alongside popular Jamaican dancehall and Trinidadian soca tracks. Though soca has strictly dominated carnival in the Caribbean for the past three decades, afrobeats has, in recent years, defied restrictions and brought new sounds to the annual celebration.

"Afrobeats drum patterns, tone, and lyrical content is fusing with the current state of soca music and some of the dancehall that exists," says Ryan Alexander, more commonly known as DJ Private Ryan. The Trinidadian DJ is known for producing the most sought out carnival playlists: "DJ Private Ryan Presents Soca Starter," and Soca Brainwash carnival fete.

"When you look at a song like 'Lebeh Lebeh,' it's not an original track," he says about the 2017 dancehall track by Jamaican artist Ding Dong. "Lebeh Lebeh" is a remake of the afrobeats record, "Mad Over You" by Nigerian singer, Runtown, and one of the most prominent songs heard on the 2018 and 2019 carnival road.

"Some Jamaicans didn't even realize that," Alexander continues. "Because Ding Dong literally took that song, sang that over, put his spin to it, and added a dance. That's how it was born."

Because of this, afrobeats has tapped into the two groups that trek to Caribbean carnival the most: soca gatekeepers and foreign (aka "farin"—which is how Caribbeans refer to foreigners particularly from the US) tourists who can't establish the differences between soca, dancehall and afrobeats music anyway.

"When you go to Europe, the UK, and certain places in North America, the distinctions aren't drawn as hard as they would be within the Caribbean," says Kamal Bankay, chairman of The National Carnival Committee in Jamaica and director of Xodus Carnival Band. "When you're in the Caribbean you make a distinction between bashment or what they call a particular style of dancehall or soca, calypso, or wuk up from Barbados, etc. The further and further you get away from the Caribbean, the more that the lines eventually cease to exist and people just say Caribbean music and it becomes carnival music," Bankay continues.

But how did West African pop music get in this mix?

Despite colonial restrictions forbidding the enslaved to sing songs and utilize drums, Africans and their descendants in the Caribbean proved resilient and innovated ways to preserve West African traditions using percussion instruments out of bamboo and steelpan. Trinidadians extended use of call & response and repetitional phrase at an identical pitch in songs became known as calypso. The blending of East Indian chutney sounds and calypso later transformed into "the soul of calypso" better known as soca.

Africans were later introduced to Calypso in the 1940s when the style became the first Caribbean sound internationally sold, reaching London and imprinting on the West Indians and Africans in the UK. Soon after, reggae, made famous by Bob Marley and his peers, became wildly popular on the African continent. Overtime afro dancehall, afro-reggae, and afro soca were born.

In retrospect, Caribbean people, especially Trinidadians, haven't been as open to playing additional genres at carnival with local gatekeepers attempting to protect their biggest cultural event from outside infiltration. What drives the genre is what limits it from reaching charting global status as afrobeats has now accomplished. Soca is almost too strict to Carnival.

"On a listening basis, Soca is like EDM. EDM is festival music. You just can't listen to EDM like that," says Kwesi Hopkinson aka Hype Hoppa, the head of Scorch Limited Entertainment company in Trinidad responsible for the prime carnival fete, Scorch Duck Work. He believes that soca's close association with carnival has to do with its party energy.

"If you haven't been to the festival or a part of it, you may not get it. If it's your first time hearing some of the faster songs, it's going to be strange," he says.

Afrobeats, however, did strike the Trinidad carnival crowd in 2018 with songs like Davido's "If" and "Fall", Afro B's "Drogba (Joanna)" and in the past there was "Bend Down Pause: The Carnival Remix" by Machel Montano, Wizkid and Runtown. But some also suspect that the genre specifications were ultimately undetected and that may be why certain songs advanced. "I don't think people realized that it is afrobeats," Hopkinson resumes. "They don't know it's afrobeats they're listening to because it's so similar to soca. The beat is so similar that it's really easy to transition."

Due to afrobeats' newfound popularity, however, some believe it does have the potential to deepen and develop Trinidad's carnival restrictions on a more regular basis.

"If I had to speak on behalf of Trinidad and Tobago, afrobeats is so similar to the music that we know and we love that it will easily emerge in our society," reflects Jules Sobion, commander-in-chief and CEO of Caesars Army Limited, a Trinidad event production company which host Caesar's Army AM Bush, a weekend carnival frenzy where attendees gather at 3:00 am to get doused in paint and water while dancing. "I just think that we are very limited in what we know and what we experience," Sobian continues. "So ideally, we are not prepared to jump outside of the box or go experience other culture's music. It's a learning curve that hopefully the next generation will now start to pick up on. But afrobeats is an innovation. We just need more persons or entities to be the catalyst."

For 2019, the Trinidad carnival parade did not play much outside the box of soca. But in Jamaica, which happened on April 28, was a great infusion of afrobeats that has officially become apart of the country's carnival: one reason why some choose to attend the newer carnivals over traditional affairs.

"Afrobeats has been warmly welcomed to the shores of Jamaica for a couple years now," says Andrew Bellamy, co-founder and managing director of I LOVE SOCA Jamaica Cooler Fete. "The similarities in musical construct between reggae and afrobeats make it super easy for Jamaicans to love it. It is played regularly on our radio airways and as such is regular part of our events and by extension will be a part of our carnival."

"I was recently in Africa and it was while I was on that trip where I truly learned of the genuine love of Africans for reggae and some dancehall and it had me thinking of it was possible to export a brand or product there," Bellamy continues. "...I believe in a few years, every carnival will have to infuse afrobeats and dancehall (whether it be on a small scale) as the Caribbean continues to become one big famalay."

The only thing missing now is a Caribbean-style carnival in Africa in which all the carnival entertainment leaders agree that they are tackling in the very near future.