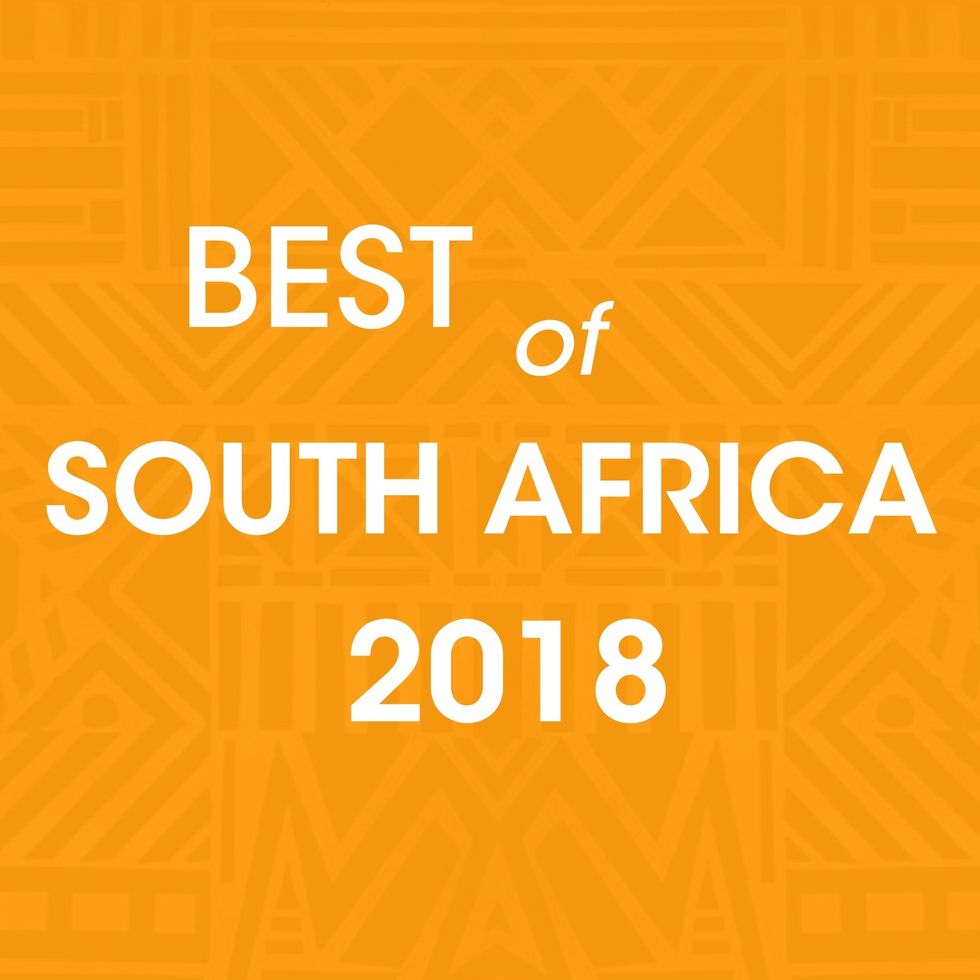 Here are South African songs that caught our attention this year.

The diversity in the scene always ensures there's something for everyone. This year, newer artists such as Manu WorldStar, Zoocci Coke Dope, Una Rams and Radio 123, among others gave us tunes to laugh, cry and dance to. While veterans such as Black Coffee, RMBO, Jabba X (R.I.P), among a few others, proved that they still got it.

Below are 30 South African songs that caught our attention this year, listed in no particular order.

Nakhane's single "Clairvoyant" from his brilliant sophomore album You Will Not Die sees the artist's layered vocals float over ethereal pads, a sporadic electric guitar and skittering drums. It's the outstanding writing and how every element blends with the singer's voice that makes "Clairvoyant" a song you can't listen to just once.

Black Coffee and David Guetta's collaboration, "Drive," features the vocalist Delilah Montagu. She impressively sings about driving a thousand miles into the dead of the night till she runs out of love for her bae. "Drive" is electronica meets South African house—Black Coffee's drum patterns anchor some subtle synths and pads.

Zoocci Coke Dope and KLY's collaboration is about when the stars align, when you "wanna fuck, and she says she wants the same thing. And we can smoke and fuck and remain friends." We all know how that usually goes. Zoocci and KLY are two of the best out at the moment, and on "FWM," they show off their diverse melodies and writing skills over a simplistic trap beat.

Manu WorldStar, the up-and-coming South African-born Congolese hip-hop artist's latest single is an Afropop smoothie that's currently melting everyone's hearts. The song sees Manu taking a break from the bars he's known for, and opting to serenade a lady who stole his heart, over smooth keys and cloudy pads, surrounded by layers of percussion.

NaakMusiQ and Bucie took it back to the 80s in their latest hit. "Ntombi" boasts those techno pop-esque synths and pads, reminiscent of South Africa's bubblegum genre which was popular in the 80s (Yvonne Chaka Chaka, Splash, Brenda Fassie etc.). "Ntombi" works not only because of the nostalgia, but because Naak, Bucie and the producer Kilimanjaro managed to keep it current. A modern classic of note.

"Abantu" is a quintessential ATM (African Trap Music) song. It blends trap with South African melodies with trap. Just like most ATM songs, "Abantu" has no autotune; all vocals are as raw as the lyrical content. There's nothing innovative stuff being said on here, but the melodies and how all three artists interpret the music they are given is impressive.

Sjava and his ATM goons gathered for a song celebrating friendship. As is the case when these three get together, their chemistry is undeniable. Sjava, Emtee and Saudi have similarities but are still unique individuals and artists, and that always makes for great listening. "Abangani" is yet another perfect joint from the pioneers of ATM (African Trap Music).

On her latest single, Nonku Phiri's still singing over electronic production effortlessly. In "Sîfó," she stacks her vocals when she harmonized to make them sound like synthesizers, thus using her voice as an instrument which blends with the beat.

BigStar and Rouge married old school R&B with hip-hop on "Two Cups," a song that gets better with every minute that elapses. The song keeps getting bigger, and culminates with Rouge interpolating MC Lyte's "Cold Rock A Party." If you grew up in the 90s, you'll catch the Holy Ghost when "Two Cups" plays.

"Move" borrows from kwaito, EDM, pop and even jazz, and is perfect to shake your booty to. As illustrated by the dancers on the video, "Move" is perfect for private listening in your living room, the kitchen, the beach, and pretty much anywhere there's enough space for your gyrations. "Move" is an oxymoron in that it's nostalgic and futuristic at the same time. Nothing unexpected with Spoek Mathambo on the boards. The band's lead vocalist Manteiga dominates the song with her personality on two verse and the hook, while Spoek appears on one verse with his swaggering delivery.

Sun-EL Musicianowned 2017 with "Akanamali," his collaboration with Samthing Soweto. His new album, Africa To The World, proves "Akanamali" wasn't beginner's luck. It's packed with heaters and "Sonini" is a dance floor-ready Afro house banger that deserves a spot in your playlist.

"Manga Manga" is an anomaly. The duo's vocalist Simangaliso Mfula croons with a swaggering drawl, his vocals drenched in reverb. They are accompanied by a trumpet played by the other half of Radio 123, Nyameko Nkondlwane, and an incessant bassline that's sitting under high-time hi hats and 808 snares now synonymous with trap music. "Manga Manga" combines live instrumentation and electronic music, and you need it in your life.

"Mzabalazo" has a huge kwaito influence with skittering drums and buzzing synths. Leraba laces the music with matching flows to give the track more personality.

A refurbished version of Muzi's album cut "Questions" combines electronic music and Afrocentric production and vocal styles. For a song that's about love gone wrong, "Questions (Other Draft)" sure does sound like a happy song.

AKA “Fela In Versace” (ft. Kiddominant)

"Fela In Versace" is the standout song on AKA's third album Touch My Blood. The song sees Supa Mega's autotuned vocals and bravado-laden raps glide over an addictive guitar loop, and Kiddominant's hook makes the song even richer.

J Molley's life done changed. He's the youngest in club, sipping seven bottles. "Holy shit, think I just took a picture with your bitch/ New money, who this?/ New money 5 digits," he sings on the hook. "Seven Bottles" proves that less is more—the artist is succinct in giving an update of his life, using autotune in his own unique way.

Musically, "Beach" is dense, but doesn't sound scattered. Petite's ethereal voice floats and fills up your speakers as he sings about the desire to be free from the bondage that is mental illness. And a verse from Danny Brown is always welcome.

"Egoli" from Mlindo's new album is the soundtrack for the dreamers who leave Kwazulu Natal to chase the paper in the City of Gold. Nothing like hearing two of the most authentic voices in South Africa right now in one song.

"Mazenke Music" is vintage Jabba in a modern setting. The music is bouncy and is a cross between kwaito and trap. Just like the other four songs on the late rapper's new EP #FGTBB, the song is proof that Jabba had the rare ability to fit into any era and still maintain his essence. Rest in peace to a legend.

On "Zoo Keeper," from his new EP Choose Love, Aewon's pen game is A1. He croons about Africa as a zoo held captive by fear, corrupt politicians, identity crises and a lot of other ills. The song is melancholic as the artist's vocals are slightly distorted and drenched in auto-tune. The beat is big, with even bigger drums, and has enough space for the artist to opine about the continent.

Anatii's sophomore album Iyeza is a masterpiece; all 10 songs are solid. "Ntloni" stands out. Anatii combines his hip-hop roots with his new vocal style, and the result is a distinct South African song from a highly inspired album.

Bonj's first solo single, which precedes countless guest features, is a song to bump during summer on the beach—it sounds like a holiday, from the bass line to the singer's layered vocals and the percussion the song stands on.

More and more young South African artists are incorporating genres they grew up listening to into their music. "Potoza Game" is one such song; it blends genres like hip-hop, maskandi and folk seamlessly.

Kimosabe is not into the habit of making duds. "Something Else" is one of many singles he churned out this year. It's the intensity in his voice, the eloquence in his writing and how the lyrics marry with the music that makes "Someone Else" memorable.

Msaki's alto finds a fitting atmosphere to exist in, in the percussion-heavy production of Black Motion. "Rise" is as much tailored for the dancefloor as it is for your earphones. Download Black Motion's new album, Moya Wa Taola, here.

Who knew KLY could go vernac and still kill it? In his latest single, the singer laces a soulful trap instrumental with Zulu vocals, and proves his dexterity.

Beatenberg's first single in four years, "Camera," is a smoothie blending folk, pop and soul. It's reminiscent of Vampire Weekend, and deserves a spot on your playlist, especially to resort to when the party's over.

Una Rams' songwriting is A1. He has the ability to document feeling, and on "Joy," he expresses the pleasure and fulfillment that comes with being in love, and his effortless vocals are as convincing as they are heartwarming.

From Thandi Ntuli's sophomore album Exiled comes a song about pain, healing, trust and how life can come at you, no matter who you are or what position you find yourself in. The artist's lush compositions play the perfect backdrop for emotionally intense lyrics, as if to make the healing process easier.