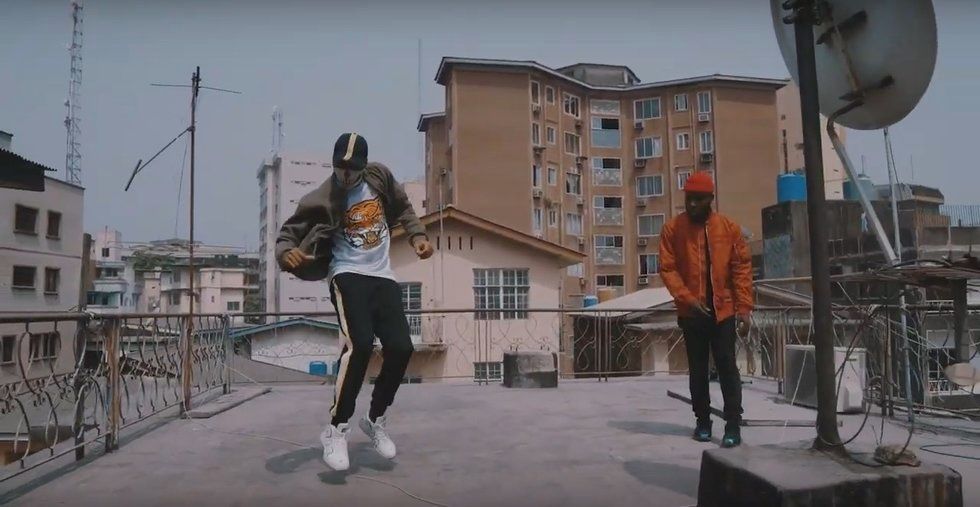 Zlatan Ibile is having one hell of a start to his 2019 with the spread of his massive dance single, "Zanku (Leg Work)," and now, the release of the video for his Burna Boy collaboration, "Killin Dem." The single, which dropped late last year in anticipation of Burna's sold out show at the Eko Convention Center in Lagos, sees the two Nigerian acts going in over some highly-infectious beat work produced by Kel P. "Killin Dem" is a straight-up banger that seamlessly blends Zlatan's energetic 'zanku' style with Burna Boy's afro-fusion.

South African artist Mx Blouse hit the ground running in 2019. They just released a new single, "No Match," accompanied by a minimalist yet stunning music video. While in the song they rap about a person they're over, the video shows them alone in a canyon, performing under a partly cloudy sky. Maybe the underlying message is that they are better off on their own. Sonically, "No Match," which was produced by Albany Lore and Thor Rixon, references kwaito with traces of electronic and even jazz.

South African artist, producer and DJ, RMBO, who's also a drummer for the band BLK JKS, is releasing a project on the 16th of June, South Africa's Youth Day. "Vibe" is the first single to the project, which will be titled 20/20. The song features Siya Shezi, Khaz Money and Scarface Manolo (from the band RADIO 123), and is classic kwaito as you loved it in the 90s, from the slow tempo to the big bassline and the bounce that can't be described but felt.

South African MC Yugen Blakrok is on a roll. Two months after releasing a music video for "Carbon Form," the first single to her upcoming album, she unleashes another video for the album's second single "Picture Box."The music video, which is shot in lowlight, shows Yugen rapping in a rotating living room while mysterious characters linger around. One of them stabs a TV with a spear. The production design and art direction of the video is deeply rooted in the afrofuturism Yugen Blakrok and her Iapetus Records label mates have proven to be fond of.

Afro B is starting the year strong with his remix to "Melanin", featuring Nigeria's very own Yemi Alade. Since the message of the Team Salut-produced track is all about celebrating black women and their beautiful melanin, it only feels right to hear a verse from her in all her glory. "This song is my way of showing my appreciation for all the Melanin queens across the world," Afro B tells OkayAfrica. "It felt like it was only right that invited another Melanin queen—Yemi Alade—to join me on this smoothed out Team Salut production."

Every year, since 2015, South African lyricist YoungstaCPT releases a song as part of his "Own..." series. The latest, titled "Own 2019," sees the MC reflect on 2018, from the death of HHP, Pro and Ben Sharpa, his travels ("I performed in Dubai and shook hands with Nas"), and projects that impressed him last year. And, of course, he promises to own this year.

AKA and his frequent collaborator Yanga Chief are grown up versions of themselves in the music video for "Jika" (think Kanye West and 88 Keys on the video for "Stay Up (Viagra)"). And, as you might have noticed, some senior citizen love having a good time and just being life goals, AKA and Yanga do just that. AKA, sticking to the song's storyline, is wooing a woman who he says he wants to get old with.

Rwanda-rooted, Montreal-based singer-songwriter Nicole Musoni links up with Kaytranada for this stellar new electronic R&B jam "Die With Me" off her upcoming EP, 7teen. "The song is a tale of taking a gamble in life, dropping everything in pursuit of something greater and more fulfilling," a statement from her camp mentions.

One of the most solid rap crews out in South Africa right now, Revivolution just released a serious banger. The group are known for their backpack boom bap sensibilities, by way of street-centric bars and golden era production. In their latest single "Skyf," however, members Revivo, illy, Ferno, Tony and fusion take turns to deliver potent verses over a bass-heavy trap instrumental that leads with a recurring 8-bit tingle. It's always a pleasure hearing all these varied personalities together in one song.

Zlatan, the bubbling Nigerian artist behind "Zanku (Leg Workanku (Leg Work)" teams up with afrobeats giant Davido for the new club banger "Bum Bum." As you probably gathered from the title, "Bum Bum" is an ode to large derrières. The video makes this even more clear as several dancers show off their moves (and backsides)— with several hitting popular moves like the zanku and shaku effortlessly— throughout the video.

Mash-Ups of AKA x Lupe Fiasco and Nalingi x Pharrell

DJ Supernova is on a roll with these mashups. Right after mashing up AKA and Kiddominant's "Fela In Versace" with Lupe Fiasco's "Kick Push" last week, the DJ dropped another unlikely combination of songs."Nalingi," Manu WorldStar's breakout pop crossover single was huge last year. The song, which combined pop and Afrobeats, resonated with many fans across the continent.