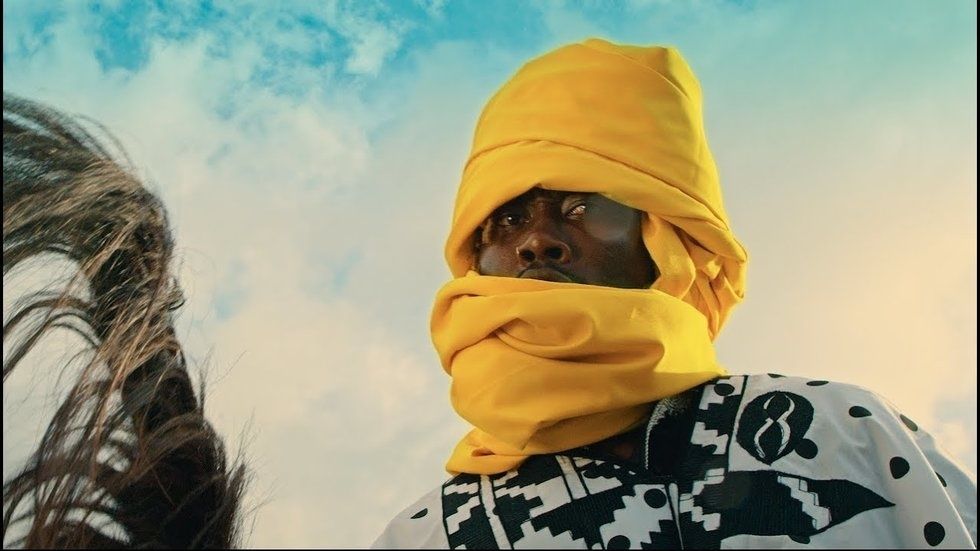 Distruction Boyz 'It Was All A Dream'

Durban gqom duo Distruction Boyz just released their sophomore album, a year after their platinum-selling debut Gqom Is The Future. It features the likes of DJ Tira, Mr Eazi, Dladla Mshunqisi and Beast, among a few others. While their debut led with the massive hit single, "Omunye," It Was All A Dream is a stand-alone body of work that is yet to give fans a hit of choice to lose morals to this December.

"Guda" is the second single off Ghanaian artist Kirani Ayat's forthcoming debut album, Aisha Sun. In his signature Hausa-rap style, he delivers an infectious afro-trap track that tells the story of struggle, perseverance, determination and the will to succeed and become the one. "The song talks about me being the one. Guda means the one, the chosen one. It also talks about a story of grass to grace; it's sort of like a motivational, inspirational song and also a bit braggadocious too," Ayat tells us.

After teasing what's to come with 2018 singles "Nowo" featuring Wizkid and "Baba" featuring Kizz Daniel, Nigeria's own DJ Spinall's long-awaited album is here. Iyanu is the producer and DJ's fourth studio album. The 10-track project is packed with star-studded features including Davido, Burna Boy and Tekno, alongside jams from newcomers Nonso Amadi and WurlD.

Odunsi The Engine'sdebut album rare.has been well-received since its drop earlier this month, where the Nigerian producer and singer gives us an aesthetic listening experience. "falling" is the first music video from the project and it doesn't disappoint. Shot on location in Dubai, the music video is in line with the track's 80s r&b; and funk vibe with hazy treatment, glowing melanin and meme-able stills to match.

South African producer and rapper Tweezy had a busy year. From lending production to several albums that came out this year (Nasty C's Strings and Bling, L-Tido's 16, Bigstar Johnson's Me and Mines), to releasing an EP titled Seeds as part of the trio T.M.Z, which consists of him, Makwa and Zingah. As if that wasn't enough, the artists just released a solo single titled "Legend." And it bangs. Marilyn McCoo and Billy Davis Jr.'s "Nothing Can Stop Me" gets looped and strengthened by heavy 808s.

Wizkid and R2Beeshave previously connected on big songs like "Tonight" and "Slow Down." The Nigerian star and Ghanaian duo are now revisiting their tried and tested musical chemistry in this new single, "Supa," which was produced by Killmatic. "Supa" builds on a minimal beat work and sparse-yet-addictive melodies to deliver a solid song about love and lust.

South African rapper and singer Saudi recently released a music video for his song "Drip," from his debut album, 2017's D.R.U.G.S Inc. "Drip" is one of the standout songs on the album, which has plenty of great tunes. Just like most of the album, "Drip" showcases Saudi's effective songwriting skills, as he uses the word drip to make reference to his sauce and sex.

TrapFunk & Alivio are a Brazilian group coming out with some truly high-energy, melting pot music built on influences from their home of Salvador, Bahia. The quartet—which is comprised of Dj Alle-x, Manno Lipe, Dj MG and Banha—has previously collaborated with NY producer Kashaka and Everyday People's DJ Moma. They're now coming through with the new video for "Bota Kara" which you can check out above.

Joburg-based Cape Town electronic producer and disk jockeyDJ Skinniez dropped two new EPs this morning. The two projects, which are called Inhale and Exhale, are linked as they both explore the theme of breathing. Each EP consists of five songs. The projects showcase the extremely talented artist's diversity, as you'll hear traces of dubstep, boom bap and even trap co-existing seamlessly.

Odunsi's been busy these days with the release of his album, rare., and now this collaboration with Nigerian-Canadian artist BabaFemi. "Adura" (Yoruba word meaning prayer) takes influences from BabaFemi's upbringing in Toronto and his cultural Nigerian ties, with hints of Yoruba and Toronto slang intermingled in his lyrics.

South African rapper Frank Casino and his boys are cruising through the streets of Joburg's north side in his latest music video. The song "Come Alive," is the first single from the MC's upcoming four-track EP Heroes of Tomorrow. "Come Alive" is a jaunty trap banger that doesn't feel out of place in the catchy summer songs out now. The MC raps and sings about a woman who's "gonna get the D from the DM slide" and is his ride or die, but for now they ride.

South African rappersYoungstaCPT and Da L.E.S just released the music video for their collaboration "Slam Dunk." The song is from Da L.E.S' compilation album, Hall of Fame 2, which was released earlier this year. The bass-heavy banger was produced by the Cape Town-based Kay Faith.