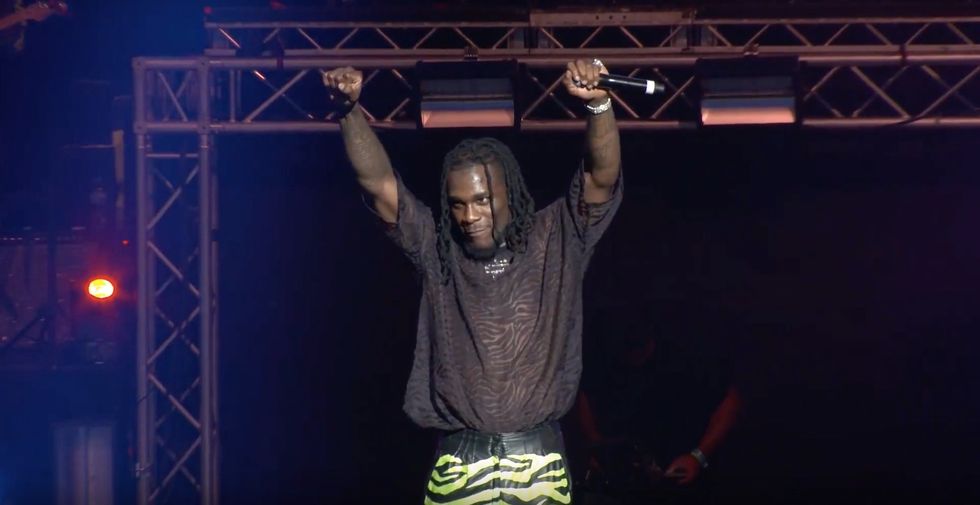 Of course, the crowd went absolutely wild when "Ye" came on.

During his set, the singer ran through many of his most popular tunes, proving once again that he's one of the best performers on the scene. The entire 3-hour show, which saw Burna go through several outfit changes and shifting backdrops, was streamed live on Youtube.

It was an eventful night, but the main highlight of the show, was when Burna began to perform his hit song "Ye—" the beloved banger that many Nigerians want to see become the country's National Anthem.

A video shared on social media captures the uproarious reaction from the crowd once the song's intro began to play. Fans immediately began shouting the lyrics word-for-word, with Burna Boy left watching in awe as the crowd sang and lit up the arena with their cellphones. "Fans paid to perform for Burna Bout at his own show...greatness," wrote one fan on Twitter.

Check out the clip below.

Reactions to the show have been overwhelmingly positive, with many pointing out that the singer has solidified his spot amongst afrobeats greats. Several fans and fellow musicians, including Adekunle Gold and Patoranking, have congratulated Burna on the show's massive success.

Everyone commending @burnaboy last night for a great show. I’m telling you that guy is one of a few in our scene wh… https://t.co/DuqHzd3deu
— Neptizzle (@Neptizzle) 1539013951.0

With Burna Boy's unforgettable show, it's clear that contemporary Nigerian music is becoming increasingly influential on a global scale and Burna is one of the artists at the forefront of this.

He's set to wrap the UK leg of his "Outside Tour" this month in Birmingham.